Diwali 2022: How is the festival of lights celebrated?

Diwali 2022: How is the festival of lights celebrated? 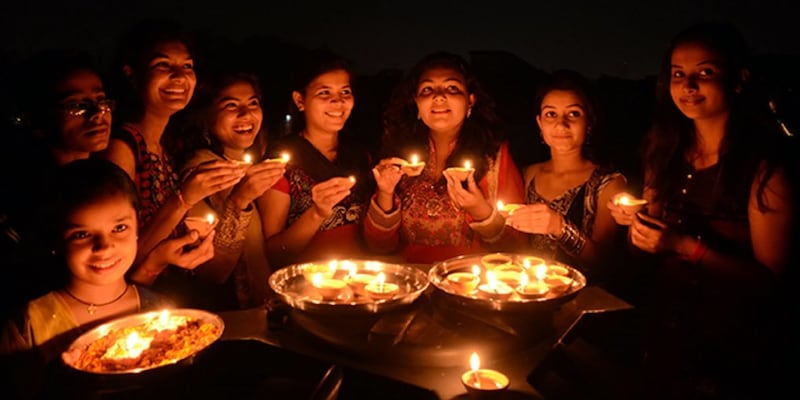 In India, different ceremonies are observed on the five days of the festival, with the third day being the main event. On Diwali night, a number of Hindu families offer prayers to the two deities Lakshmi and Ganesh for wealth, prosperity and wisdom

One of the most popular festivals of India, Diwali or Deepavali is celebrated to mark the return of Lord Ram to Ayodhya along with his wife Sita and brother Lakshman after defeating the demon king Ravana and completing 14 years in exile.

Also known as the festival of lights, Diwali represents a symbolic victory of good over evil, peace over joy, knowledge over ignorance, and light over darkness. For the business community, Diwali is an auspicious time to start new ventures as the festival coincides with the Hindu New Year.
In India, different ceremonies are observed on the five days of the festival, with the third day being the main event. On Diwali night, people offer prayers to Lakshmi and Ganesh for wealth, prosperity and wisdom.
Here’s a look at how Diwali is celebrated in India.
The weeks before the Diwali celebrations, houses are redecorated. People buy new clothes and jewellery and exchange sweets, dry fruits and nuts. In some parts of north India, carnivals and fairs are organised. Gambling is also part of the celebrations and people engage in playing card games throughout the night in the weeks before Diwali.
ALSO READ: Planning to buy gold this Dhanteras? Here is how to invest wisely
From Dhanteras to Bhai Dooj
The first day of the festival is Dhanteras, which is considered an auspicious day to buy gold, silver, metallic kitchen equipment, appliances and other things etc.
The second day is known as ‘Chotti Diwali’ in northern India, Bhoot Chaturdashi in East India and Naraka Chaturdashi in the West and South. Traditionally, every household lights diyas or candles and decorates the entrance with rangoli.
The most important day of Diwali is the third day when prayers are offered to Lakshmi, the goddess of wealth, and Ganesh, the god of wisdom and good fortune. Houses are lit with clay lamps and fireworks are displayed.
Govardhan Puja is done on the fourth day of the festival. It is celebrated to honour Lord Krishna’s feat of lifting the Govardhan mountain to protect the people from Lord Indra’s wrath.
On the fifth and final day of Diwali celebrations, Bhai Dooj is observed where sisters pray for the well-being of their brothers.
How is Diwali celebrated in India?
In north Indian states like Uttar Pradesh, Diwali celebrations begin with the aarti of the River Ganga. Priests chant hymns at night, making the festival a truly spiritual experience. Earthern lamps are also floated on the river.
In Punjab, Sikhs observe ‘Bandi Chhor Diwas’ on the day of Diwali. Bandi Chhor Diwas commemorates the day of liberation. Houses and the Golden Temple in Amritsar are illuminated.
In south India, Deepavali is celebrated as Naraka Chaturdashi or Kali Chaudas as it is believed that on this day, Lord Krishna and Goddess Kali killed the demon Narakasura. In Andhra Pradesh, Telangana, and Tamil Nadu, people wake up in the morning and take an oil bath, wear new clothes and worship Goddess Lakshmi. In Kerala, people take a ritualistic oil bath and have a special meal. In Karnataka, the day is celebrated as Balipadyami, where prayers are offered to King Bali who was killed by an avatar of Vishnu.
In east India, West Bengal celebrates Kali Puja on this day. It is believed that on this day, Goddess Parvati appeared as Goddess Kali to kill the demon Bakasura.
In west India, states like Maharashtra celebrate Diwali as Vasu Baras, which is held in honour of cows. On Dhanteras, people in Maharashtra honour the sage Dhanvantari, who is the ayurvedic doctor of the gods.
ALSO READ: Why is Dhanteras considered auspicious for buying gold in India?
(Edited by : Sudarsanan Mani)
Check out our in-depth Market Coverage, Business News & get real-time Stock Market Updates on CNBC-TV18. Also, Watch our channels CNBC-TV18, CNBC Awaaz and CNBC Bajar Live on-the-go!