SpiceJet services have been in Delhi, Dharamshala and Bagdogra following heavy rainfall in the regions. Besides Delhi, monsoon also advanced into Haryana, Punjab, Himachal Pradesh, Rajasthan, Jammu and Kashmir and parts of Uttar Pradesh, the India Meteorological Department (IMD) said.

Finally, monsoon is here for Dehiites. The national capital saw major respite from the scorching heat after the city witnessed rainfall on Thursday. On Thursday, as of 10 am, the temperature in Delhi dropped to 27 degrees Celsius.
Continuous rainfall in Delhi-NCR caused traffic snarls, disrupting normal lives. "The movement of traffic has been restricted at Railway underpass Pul Prahladpur. Both the carriageways are closed due to waterlogging," the Delhi Traffic Police said. 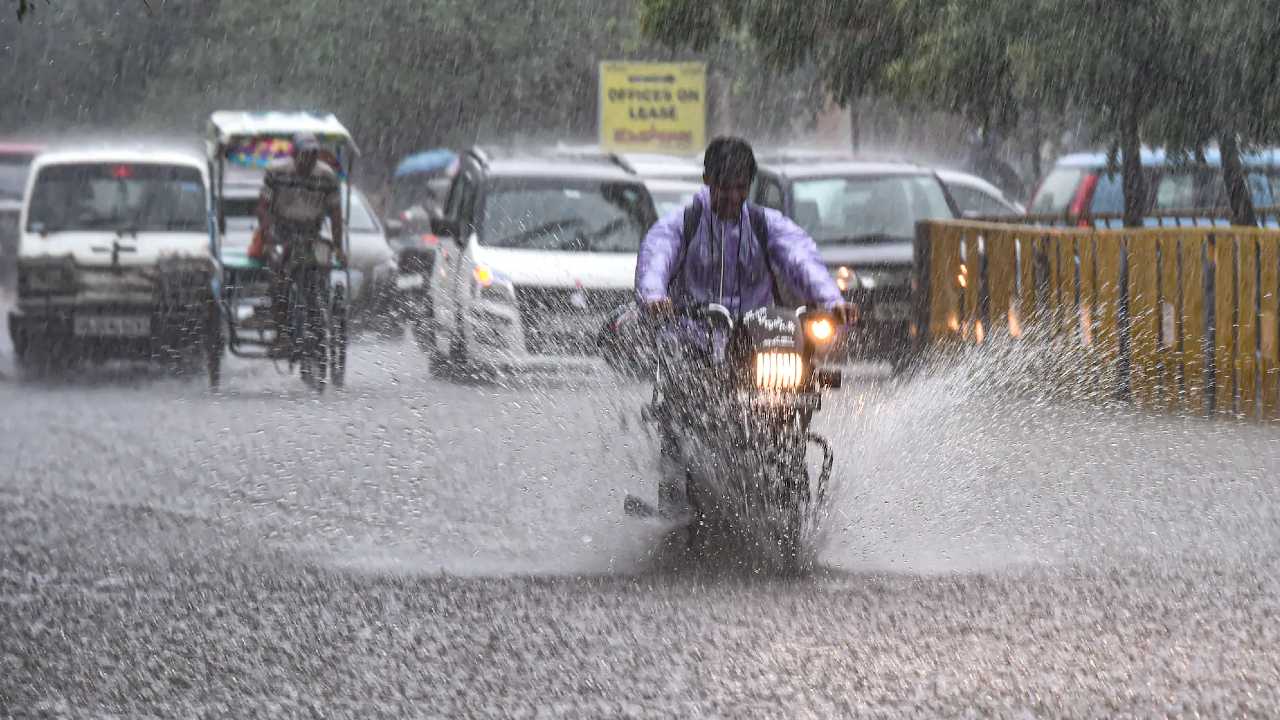 Vehicles wade through a waterlogged road amid monsoon rains, in Ghaziabad on Thursday. (Image: PTI)
Flights services were disrupted owing to the bad weather in several parts. Two flights coming to Delhi were diverted on Thursday due to heavy rain in the city. While two flights were diverted to Amritsar and Jaipur. There was a 30-minute delay in all international flights. SpiceJet services were also disrupted in Delhi, Dharamshala and Bagdogra.
"Due to bad weather in Delhi (DEL), all departures/arrivals and their consequential flights may get affected. Passengers are requested to keep a check on their flight status," the airlines tweeted.

#WeatherUpdate: Due to bad weather in Dharamshala (DHM), all departures/arrivals and their consequential flights may get affected. Passengers are requested to keep a check on their flight status via https://t.co/VkU7yLjZly.

The India Meteorological Department (IMD) also issued an orange alert in parts of Delhi for Thursday. Light to moderate rainfall is expected in North Delhi, East Delhi, South Delhi, and other areas. According to the IMD, thunderstorms with light to moderate intensity rain and gusty winds with speeds of 30-40 Km/hour would occur over and adjoining areas of entire Delhi and NCR (Loni Dehat, Hindon AF Station, Ghaziabad, Indirapuram, Chhapraula, Noida, Dadri, Greater Noida, Gurugram, Faridabad, Manesar, Ballabhgarh), during the next two hours.

Monsoon advanced in other parts of India
Besides Delhi, monsoon also advanced into Haryana, Punjab, Himachal Pradesh, Rajasthan, Jammu and Kashmir and parts of Uttar Pradesh, the IMD said. Meanwhile, in Mumbai, high tides hit Marine Drive amid rainfall in the area on Thursday. The IMD issued also an orange alert in Raigad and Ratnagiri on Friday and Saturday.

Heavy showers were also reported in Patna and Uttarakhand. Parts of Patna witnessed heavy waterlogging, while in Uttarakhand, one person died and two were injured after a boulder fell over a car with pilgrims returning from Badrinath near Chamoli.
Visuals shared by news agency ANI showed inundated roads in Rudraprayag district of Uttarakhand. "We have made all the arrangements including identification of landslide-prone zones. SDRF teams also deployed," said Rudraprayag SP Ayush Agarwal. Commuters wade through a waterlogged street after rainfall, in Jabalpur, Wednesday, June 29, 2022. (Credit: PTI)
Meanwhile, authorities have discovered a lake near Kuwari village in Uttarakhand’s Bageshwar district due to frequent landslides since the 2013 disaster, News 18 reported. According to the report, local authorities ordered an inspection and said that the lake poses "no immediate threat to lives" and efforts are on to shift villagers from the landslide-prone place to safe areas.
Assam, where over 31.5 lakh people have been affected due to the deluge, saw the death of 12 more people on Wednesday, pushing the toll due to floods and landslides in the state this year to 151. Silchar in the Cachar district remained underwater for the last 10 days, officials said. Brahmaputra, Beki, Kopili, Barak, and Kushiyara rivers were flowing above the danger level. A man stands outside his shanty amid monsoon rains, in New Delhi, Thursday, June 30, 2022. Delhi region is witnessing heavy rain with the onset of monsoon, bringing much-needed respite from the scorching heat after days of a hot and humid weather. (Image: PTI)
‌In Manipur, a river flowing through Tamenglong and Noney districts in Manipur has been blocked due to the massive landslide. This triggered danger of flash flood in the nearby villages. Damages were also reported at Tupul station building of the ongoing Jiribam – Imphal new line project in Noney.
Seven bodies have been recovered so far and around 45 persons are still missing, the Sub Divisional Officer in Noney said. "CM Manipur is in constant touch for rescue operation. As many as 19 people have already been rescued and are being treated at Noney Army Medical unit," officials were quoted by ANI as saying.