Cyclone Nivar news highlights: Cyclone Nivar made landfall near the city of Puducherry with winds of up to 130 km per hour (81 miles per hour), according to the India Meteorological Department. As it crossed into the neighbouring state of Tamil Nadu, five deaths were reported. Heavy rains from the storm caused flooding in some streets of the city of Chennai.

With that we wrap today's LIVE updates on cyclone Nivar. For more news, views and updates, stay logged on to CNBCTV18.com.

Normal life was upended in parts of southern India as severe cyclonic storm Nivar slammed the coasts early Thursday morning, killing at least three people and uprooting hundreds of trees, before weakening into a deep depression, even as a fresh spell of snowfall was recorded in Himachal Pradesh in the north. Meanwhile, the national capital recorded a minimum temperature of 10.4 degrees Celsius, one notch below the normal. Cold wave condition is expected in the city for the next two days due to a likely fall in minimum temperatures over northwest India. Nivar made landfall near Puducherry in the early hours of Thursday, dumping heavy rains in the union territory and neighbouring Tamil Nadu. Officials said at least three people were killed in Tamil Nadu, over 1,000 trees uprooted and some low-lying areas marooned due to water-logging following heavy rains in the wake of the cyclone Nivar which barged in from the Bay of Bengal with gusty wind having an estimated speed of 120-130 kmph going up to 145 kmph.

The estimated loss to agriculture and other sectors due to cyclone Nivar has been tentatively put at Rs 400 crore and a full assessment is being made, Puducherry Chief Minister V Narayanasamy said on Thursday after visiting localities affected by the cyclonic storm when it made landfall in the early hours. Paddy crops over an extent of 820 hectares besides vegetables on 200 hectares, sugarcane on 170 hectares, 55 hectares of banana crop and betel leaf cultivated on seven hectares had been severely hit by the torrential rains, the chief minister said. Puducherry administration would seek an interim relief of Rs 50 crores from the Centre,he told reporters. A full assessment was being made by the departments on the total quantum of loss in farm and other sectors although it had been estimated tentatively that the loss would be Rs 400 crore, Narayanasamy said.

At least five people were killed in Tamil Nadu and over 1,000 trees uprooted and some low-lying areas marooned due to water-logging following heavy rains on Thursday as severe cyclonic storm Nivar made landfall near Puducherry. Subsequently, Nivar weakened into a cyclonic storm and further into a deep depression,centered about 50 km west- southwest of Tirupati at 1430 hrs, the India Meteorological Department (IMD) officials said. According to IMD, it is to weaken into a depression during the next six hours. Heavy rains lashed Tamil Nadu and Puducherry as Nivar made landfall in the early hours,leading to inundation and uprooting of trees. Union Home Minister Amit Shah tweeted, "We are closely monitoring the situation in Tamil Nadu and Puducherry in the wake of Cyclone Nivar. Have spoken to CM Shrib@EPSTamilNadu and CM Shri @VNarayanasami and assured all possible help from the centre.

Tamil Nadu Minister O S Manian on Thursday inspected the damage caused by the cyclone to the rubble mound wall of the under-construction fishing harbour at Tarangambadiin Nagapattinam district. Local fishermen appealed to the Handlooms Minister to increase the width and theheight of the wall to prevent damage by natural calamities in the future. To this, the Minister said the Union government's attention would be drawn to the issue and suitable measures would be taken. The harbour was being constructed at a cost of Rs 120 crore. To safeguard the harbour from tides, the rubble mound was constructed on the seafront. On Wednesday due to the cyclonic storm Nivar, the sea remained very rough at Tarangambadi and the wall sustained damage on the southern side with the tides thrashing the huge granite stones. Tides rose several metres above the mound.

In view of the cyclone, a prohibitory order that has been in force here since November 24 to prevent movement of people and also gathering was lifted on Thursday. Rescinding the order imposed under section 144 CrPC, District Magistrate Purva Garg said preliminary assessment ofcyclone-related evacuation, rescue and relief work was undertaken by the territorial administration, and there was no loss of life or major damage reported from anywhere in the Union Territory. The prohibitory order, enforced till 6 am today since November 24, has been rescinded, she said. Meanwhile, Lieutenant Governor Kiran Bedi, in her voice message to the people of Puducherry, thanked them for their cooperation because of which the administration was able to tide over the cyclone and ensure safety to life and property. 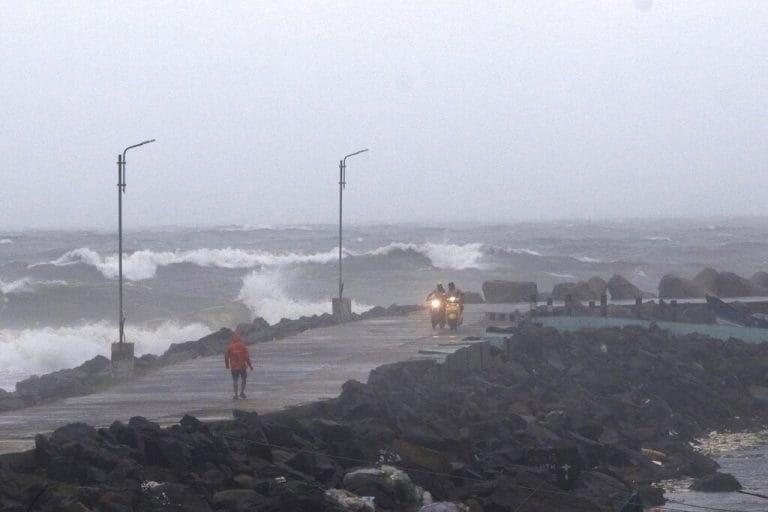 Cyclone Nivar hurtled into India's south coast early on Thursday, killing at least five people and uprooting trees and power lines. Earlier, the cyclone made landfall near the city of Puducherry and…

Normal life was thrown out of gear as heavy to extremely heavy rainfall ranging from 6 cm to 30 cm battered at least half of Andhra Pradesh under the influence of cyclone Nivar, leaving one dead. Another farmer was feared washed away while NDRF personnel rescued two others from a reservoir in Chittoor district. According to the State Disaster Management Authority, SPS Nellore, Chittoor, Kadapa, Krishna, Prakasam and East Godavari districts received heavy to extremely heavy rainfall at more than 177 places. Other districts like Anantapuramu, Kurnool, Guntur and West Godavari were also receiving moderate to heavy rainfall under Nivars impact. It said gales with a speed of 45-65 kmph were lashing SPS Nellore and Chittoor districts bordering Tamil Nadu. Tirumala Hills, the abode of Lord Venkateswara, has been receiving incessant rain since Wednesday, causing a lot of hardship to hundreds of devotees stranded there.

Parts of Indias southern coast were flooded Thursday after a cyclone slammed into its shores, triggering heavy rains, uprooting trees and cutting power lines. Cyclone Nivar made landfall in Puducherry, a federal territory near the southern state of Tamil Nadu, with winds of up to 130 kilometers (81 miles) per hour, according to the India Meteorological Department. It said the storm was weakening as it moved north toward Karnataka state. There were no immediate official reports of injuries. In Chennai, a coastal city of about 10 million in Tamil Nadu, heavy rains flooded streets, knocked down trees and cut power for several hours. Many residential areas were flooded and people remained indoors. Indias National Disaster Response Force said its teams were working to clear the roads after uprooted trees disrupted traffic in some areas.

Cyclone Nivar has claimed 5 lives in Tamil Nadu on November 26, News18 reported. The severe cyclonic storm made landfall past mid-night near the city of Puducherry and brought in heavy rains along the southern coast.

Union Home Minister Amit Shah tweeted that the government was monitoring the situation in southern India and assured all possible help to the CMs of Puducherry and Tamil Nadu in the wake of severe cyclonic storm Nivar. He tweeted: "We are closely monitoring the situation in Tamil Nadu and Puducherry in the wake of Cyclone Nivar. Have spoken to CM Shri @EPSTamilNadu and CM Shri @VNarayanasami and assured all possible help from the centre. NDRF teams already on ground to help people in need."

We are closely monitoring the situation in Tamil Nadu and Puducherry in the wake of Cyclone Nivar. Have spoken to CM Shri @EPSTamilNadu and CM Shri @VNarayanasami and assured all possible help from the centre. NDRF teams already on ground to help people in need.

Cyclone Nivar Live Updates: Heavy rains from the storm caused flooding in some streets of the city of Chennai, Tamil Nadu's largest city which is home to many large automobile manufacturers, according to a Reuters witness. The storm caused at least five deaths in and around Chennai from trees falling, drowning and electrocution, the Times of India reported.

A spokesman for the chief minister's office declined to comment on the reported deaths. Local administration workers have been working to remove fallen trees and power lines, city corporation officials said on Twitter. (Image: Reuters)

Cyclone Nivar Live Updates: Nivar has weakened into a cyclonic storm over coastal Tamil Nadu and it is set to further weaken into a deep depression, the India Meteorological Department said on Thursday.

Cyclone Nivar Live Updates: Union Home Minister Amit Shah on Thursday spoke to chief ministers of Tamil Nadu and Puducherry and assured them of all possible help from the Centre in the wake of severe cyclonic storm Nivar. The home minister said the central government is closely monitoring the situation in Tamil Nadu and Puducherry after the landfall of the cyclone and the National Disaster Response Force personnel are on the ground to help the needy.

Cyclone Nivar Live Updates: "Severe Cyclonic Storm “NIVAR” weakened into a Cyclonic Storm over north coastal Tamil Nadu. The Cyclonic Storm ‘NIVAR’ would continue to move northwestwards and weaken further into a Deep Depression during next 06 hours and into a depression by subsequent 06 hours," said IMD

"Operations have resumed at #AAI #ChennaiAirport at 0900hrs," the Chennai Airport tweeted and it also tagged domestic arrival and departure schedule for today and requested passengers to check with airline operators for updates.

Metro rail services too started at noon and authorities said, "holiday timetable will be followed with the headway (gap between services) of 10 minutes." Southern Railway officials said the suburban train services here are likely to resume operations.

The very severe cyclonic storm Nivar made landfall near Puducherry in the early hours of Thursday and heavy rains pounded Tamil Nadu and the union territory leading to inundation and uprooting of trees.

Nivar weakened into a severe cyclonic storm after it crossed coast near Puducherry, the IMD said. (Source: PTI)

Cyclone Nivar Live Updates: According to estimates, over 1,000 trees were uprooted in Tamil Nadu and Puducherry. The approach roads to the Marina beach, off the arterial Kamaraj Salai, were flooded and sheets of water reached close to the main road where the city's fishermen had securely tied up their boats.

Cyclone Nivar Live Updates: Union Home Minister Amit Shah has said that the centre is closely monitoring situation in Tamil Nadu and Puducherry in the wake of Cyclone Nivar. "Have spoken to Tamil Nadu CM Edappadi K Palaniswami and Puducherry CM V Narayanasamy and assured all possible help from the centre. NDRF teams are on ground to help people in need," Shah said.

I am overwhelmed by the commitment and support provided by @chennaicorp  and team in handling the Nivar Cylone.  Let us together set a good benchmark in handling such natural disasters with our robust systems and processes in place.

I am overwhelmed by the commitment and support provided by @chennaicorp and team in handling the #NivarCylone. Let us together set a good benchmark in handling such natural disasters with our robust systems and processes in place. https://t.co/2TX1ZAW9hw

Just In: As per the IMD sources, another fresh cyclone is brewing over the sea in the same region of the Nivar.