Cyclone Nisarga highlights: Two people died in cyclone-related incidents as 'Nisarga' made landfall near Mumbai, uprooting trees in nearby districts. Cyclone Nisarga slammed Maharashtra coast with wind speeds of up to 120 kmph, making landfall at 12.30 pm at Alibag near Mumbai. The process was completed by 2.30 pm. The cyclone is expected to weaken into a deep depression and currently lays centered over Pune.

With that it's a wrap to the LIVE updates on cyclone Nisarga, which made landfall in Alibag near Mumbai at 12.30 pm. The cyclonic storm claimed two lives and 5 others were injured in unrelated incidents. The cyclone has truned into a deep depression as it is headed towards Pune district. Thank for staying tuned. Do join us tomorrow for more news, views and other updates. Until then stay safe. Good night.

#CycloneNisarga weakens into deep depression & to further weaken into depression in 12 hours pic.twitter.com/qmxCrNRoqZ

The Indian Metrological Department has said that cyclone Nisarga turned into a deep depression late on June 3. The cyclonic storm made landfall and uprooted trees in numerous parts of Alibag, Palghar and Raigad districts and Navi Mumbai, but spared Mumbai.

BJP MLA Nitesh Rane on Wednesday tweeted videos purportedly showing damage caused to a makeshift COVID-19 hospital in BKC area here due to cyclone Nisarga, but authorities said that the structure was intact. Built by the Mumbai Metropolitan Region Development Authority (MMRDA), the 1,000-bed hospital in Bandra-Kurla Complex (BKC) is run by the Brihanmumbai Municipal Corporation (BMC). Some 250 coronavirus patients who are undergoing treatment there were temporarily shifted to other facilities as a precaution in view of cyclone threat on Tuesday. Tweeting three videos purportedly showing water inside the makeshift facility, damaged sidewalls and collapsed tin compound wall, Rane claimed that "Jumbo isolation centre at BKC goes down the drain in just few hours."

GVK MIAL managing Chhatrapati Shivaji Maharaj International Airport (CSMIA) saw a total of 20 scheduled flights which include 12 departures and 8 arrivals on June 3, as most flights were cancelled until 6 pm due to cyclone Nisarga. CSMIA connected to 12 sectors which were operated by Air India, Air Asia India, IndiGo, SpiceJet and GoAir.

Two people died and three others were injured in two cyclone-related incidents in Pune district on Wednesday, said officials. Cyclone Nisarga is currently centered over Pune after making landfall in coastal Raigad district of Maharashtra around 1 pm. Manjabai Anant Navale (65), resident of Vahagaon village in Khed tehsil, died as a wall of her house collapsed and tin sheets on the roof were blown away in the wind. "Three other members of Navale family also sustained injuries. They have been shifted to a hospital in Chakan," said a senior district official. Prakash Mokar (52), a resident of Mokarwadi in Haveli tehsil, also died after the roof of his house was blown away and he was injured while trying to catch the tin sheets, said an officer from the District Disaster Management Cell.

Cyclone Nisarga did not cause any major damage on the southern coast of Gujarat on Wednesday afternoon and evening following landfall near Alibaug in Maharashtra, officials said. The Gujarat government had evacuated over 63,700 people from coastal areas of eight districts and 18 teams of National Disaster Response Force (NDRF) and six teams of State Disaster Response Force (SDRF) were deployed for rescue operations. Luckily, the cyclonic storm passed without any major incident and casualties, said state relief commissioner Harshad Patel. "No untoward incident or human injury has been reported so far due to the cyclone. While the wind speed was normal in south Gujarat region, both Valsad and Navsari received just 2 mm and 7 mm rainfall since morning. The situation is under control," he said.

03.06.2020 1600 IST :-Thunderstorm with rain & would occur over and adjoining areas of Faridabad, Ballabhgarh, Barsana, Deeg, Mathura, Bharatpur, Isolated places of Delhi during the next two hours. Hail precipitation is very likely over and nearby Faridabad during next one hour pic.twitter.com/zciOCK4zIH

Cyclone Nisarga made landfall near Mumbai on Wednesday but spared the city already reeling under the COVID-19 pandemic, even as it uprooted trees in nearby Raigad and Palghar districts. A 58-year-old man died after a power transformer fell on him while he was rushing home to escape the cyclone fury at Umate village in Raigad district, police said. Two people died and three were injured in two separate cyclone-related incidents in Pune district, an official said. The cyclone slammed Maharashtra coast with wind speeds of up to 120 kmph, making landfall at 12.30 PM at Alibaug in Raigad district near Mumbai. The process was completed by 2.30 PM, a senior IMD official said. Cyclone Nisarga is expected to weaken into a deep depression within the next six hours and currently it lays centered over Pune in Maharashtra, the official said. Mumbaikars and people in neighbouring areas, including those in coastal Gujarat districts had braced for the cyclone but heaved a sigh of relief as Nisarga's damage appeared limited to uprooting of trees in affected areas.
Share:

After making landfall at Alibaug in Maharashtra's Raigad district on Wednesday afternoon, cyclonic storm 'Nisarga' is moving north-east and is likely to impact Nashik, Dhule and Nandurbar districts, which may witness heavy showers with gusty winds, an IMD official said. The landfall process started near Alibaug at around 1 pm and ended by 4 pm, he said. Districts such as Raigad, Palghar, Thane and Mumbai were affected by the cyclonic storm. "As per the predictions, heavy to very heavy rains with gusty winds were experienced," said head of the weather department, Pune, Anupam Kashyapi. The cyclone was now moving north-east and is likely to affect Nashik, Dhule and Nandurbar in north Maharashtra, he added. "The north-west part of Pune district will also be affected because of the movement of the storm. Widespread rains will be witnessed in Pune city and district, while heavy to very heavy showers are likely in ghat areas," the official said.

A 58-year-old man was killed after a power transformer collapsed on him due to the heavy winds in Raigad district as cyclone Nisarga lashed coastal Maharashtra on Wednesday, a police official said. The incident took place at Umate village near Revadanda around 1.30 pm, he said. Dashrath Babu Waghmare, the deceased, was rushing home as heavy rain and winds pounded the area. An electrical transformer toppled over and fell on him and he died before doctors could attend to him, the official said. 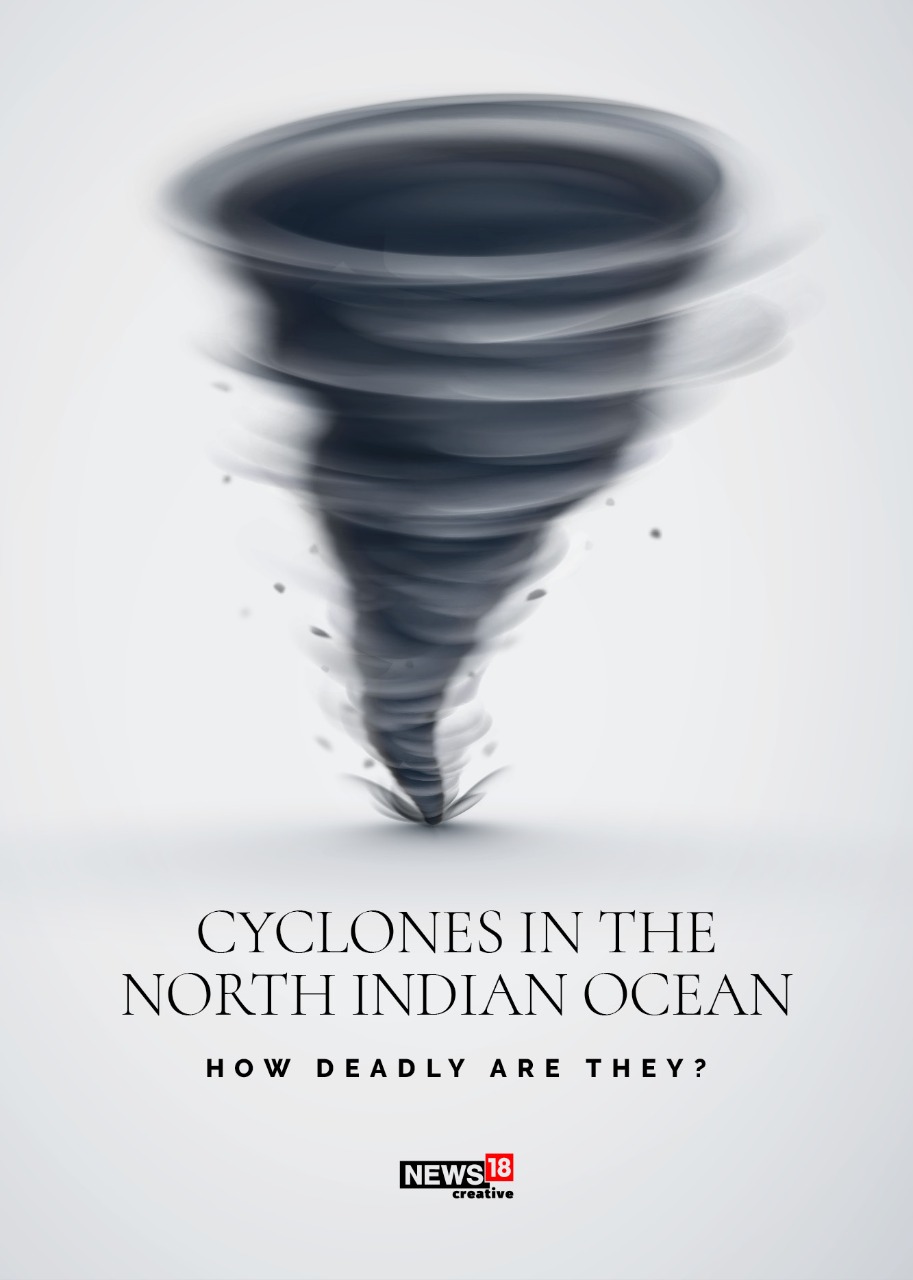 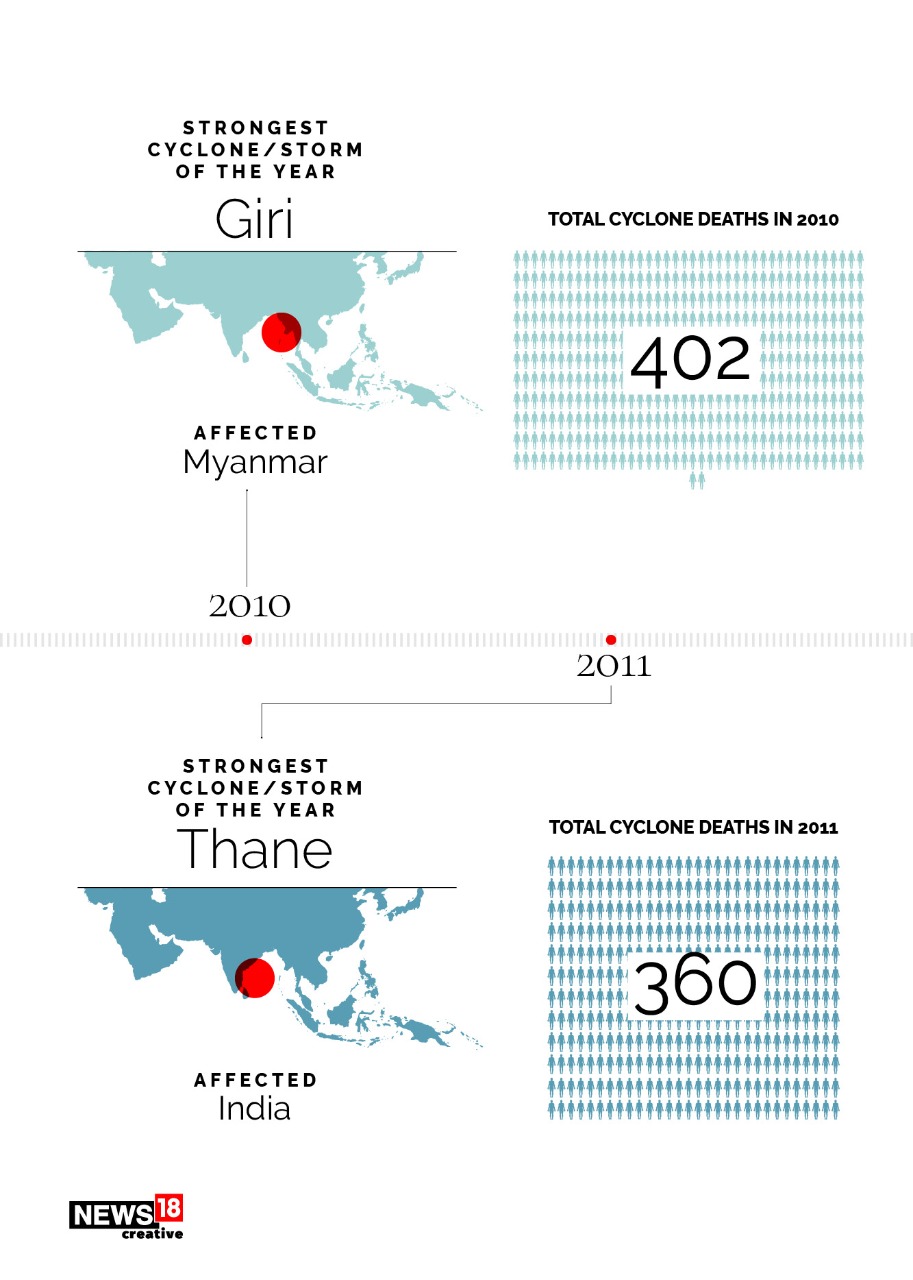 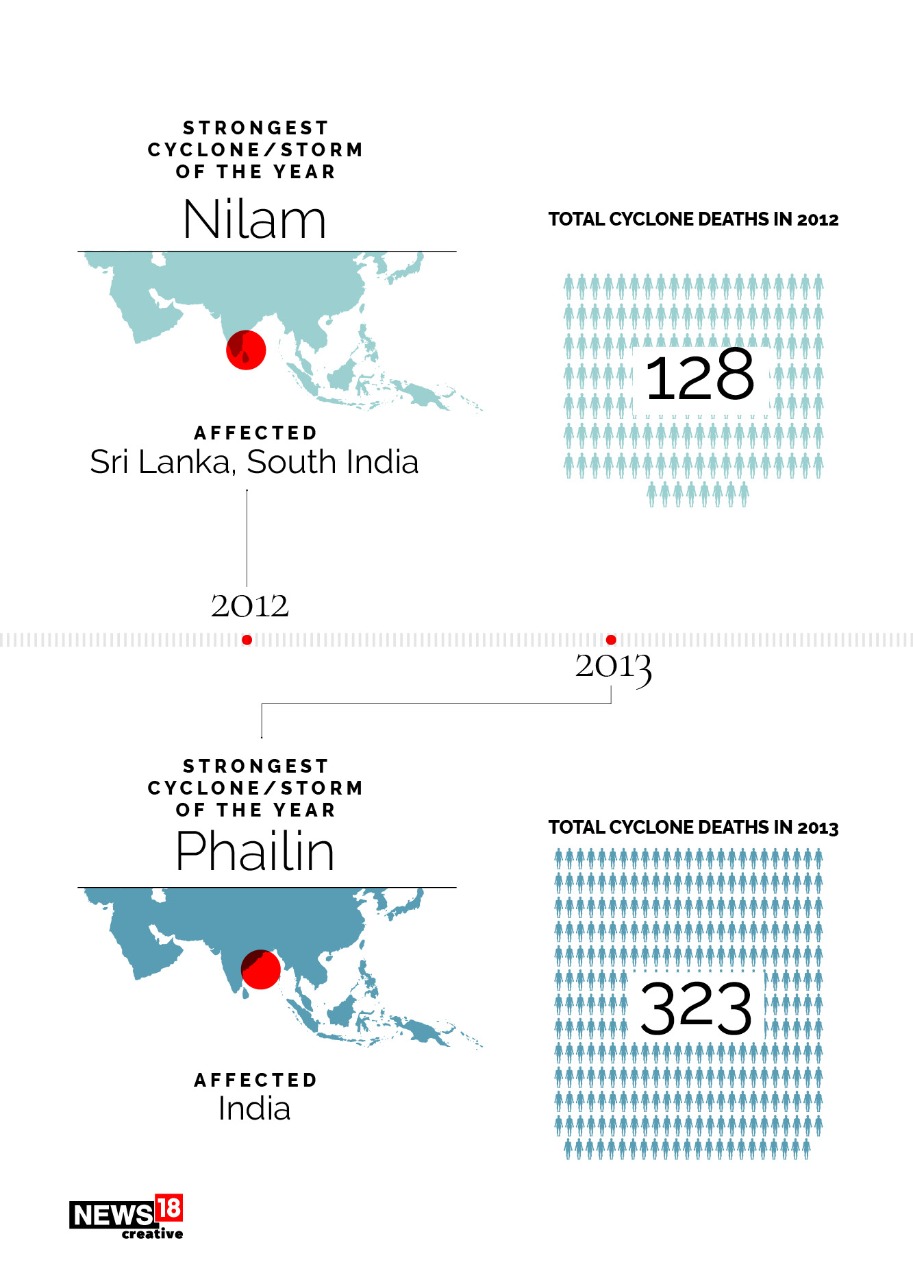 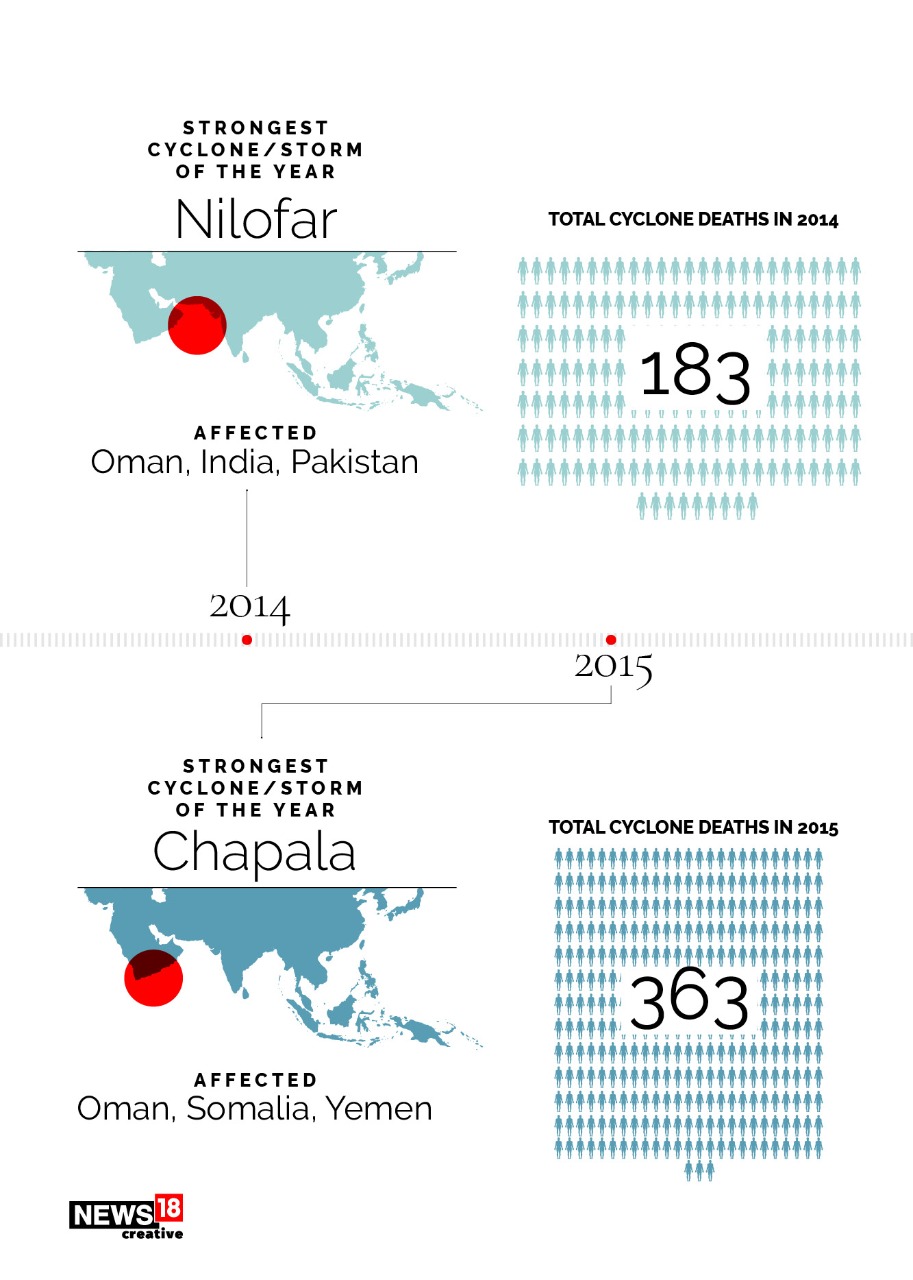 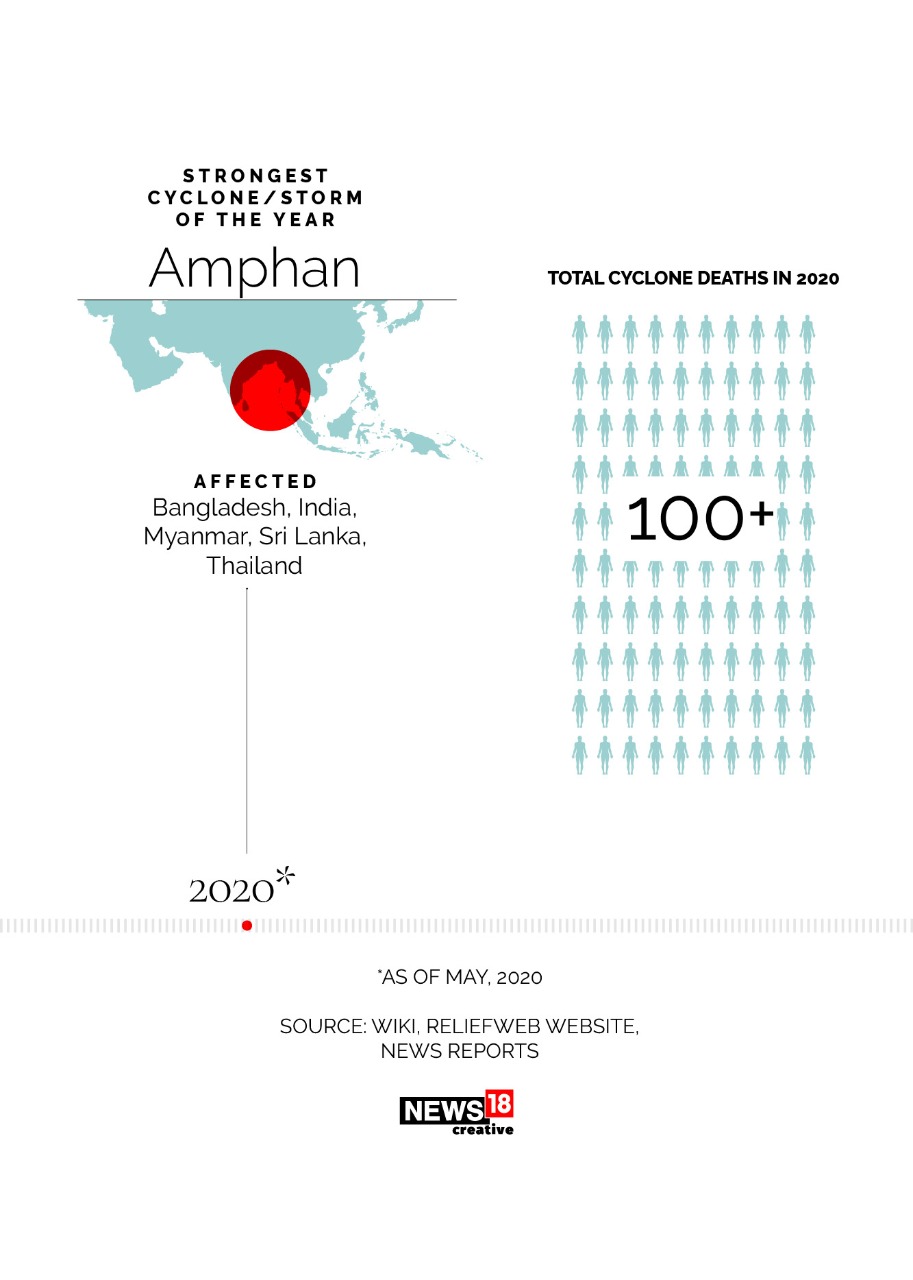 India head coach Ravi Shastri on Wednesday shared a short video of cyclone Nisarga rampaging through the town of Alibag in Maharashtra. In the video, high speed wind is lashing hard on the trees in the area and displacing things from their original places. The weather bureau had earlier sounded red alert for at least seven coastal districts of Maharashtra, while several districts along Gujarat's coast are also expecting heavy rainfall. Shastri's Twitter post read: Never experienced something like this. In the eye of the storm #CycloneNisarga. Windspeed close to 100km/hr. Ferocious." The severe cyclonic storm is expected to weaken down to a 'cyclonic storm' in six hours, according to Indian Meteorological Department.

Never experienced anything like this. In the eye of the storm #CycloneNisarga

Flight operations at the Mumbai airport, which were suspended at 2.30 pm have now resumed, a spokesperson of GVK said on June 3. MIAL, the private airport operator, had earlier announced that all operations at the CSMIA will remain suspended between 2.30 pm and 7 pm as a precautionary measure in view of the cyclone Nisarga. "The operatins at Mumbai airport have recommenced," the spokesperson said. A GVK-led consortium in partnership with AAI runs the Mumbai airport under a joint venture MIAL. "The landing and take-off is permitted at the Chhatrapati Shivaji Maharaj International Airport (CSMIA) from 6 pm," the airport spokesperson said in a statement.

Cyclone Nisarga did not land in Karnataka and has passed its border with heavy rains and strong winds, said an official on Wednesday. There was no report of any casualty, the official added. "It has already passed. We have not got any reports of fatalities. A heavy rain was expected and the deputy commissioners were alerted. Fishermen too were warned," said Karnataka State Disaster Management Authority (KSDMA) Principal Secretary TK Anil Kumar. He added that Nisarga's actual landing is in Maharashtra and the warning was given for that state and Gujarat. "In the fringe proportion (of Karnataka), high winds were expected and fishermen were warned not to venture into the sea," he said.

Several low-lying areas in Maharashtra's Pune remained inundated due to rains brought in by cyclone 'Nisarga' since Tuesday night, officials said on Wednesday. Incidents of trees falling due to gusty winds have also been reported at some places in the city. The cyclone made landfall in coastal Raigad district, several kilometres away from here, on Wednesday afternoon. Earlier in the day, the IMD predicted heavy to very heavy rainfall at a few places and extremely heavy rainfall at isolated places in ghat areas in and around Pune district with squally and gutsy winds. Parts of Maval and Mulshi tehsils are likely to be affected due to the cyclonic condition, it said. A senior official from district disaster management cell said that sporadic incidents like trees felling and damage to houses and power disruptions were reported from some places. Further, MIAL said that the flight operations at the airport have been suspended between 2.30 pm and 7 pm due to adverse weather.Get latest Aviation online at cnbctv18.com

After storming the Maharashtra coast with wind speeds of up to 120kmph on Wednesday afternoon, Cyclone Nisarga has started weakening and its intensity will reduce further by evening, the India Meteorological Department said. The landfall of the cyclone began at 12.30 pm at Alibaug and the process was completed by 2.30 pm, IMD director general Mrutunjay Mohapatra said. The storm lay 75 kilometres southeast of Mumbai and 65 kilometres west of Pune. "It has started weakening. The wind speed is currently 90-100kmph and the intensity will reduce further by evening," he said. The cyclone will further weaken into a cyclonic storm by evening and into a deep depression by late night, an IMD bulletin said.

Flight operations at the Mumbai airport will remain shut till 7 pm on Wednesday as a preventive step due to the ongoing landfall of Cyclone Nisarga, Mumbai International Ltd (MIAL) said. "Considering the strong crosswinds, it has been decided that no arrivals and departures will take place between 2.30 pm and 7 pm," MIAL said in a statement. It said that the decision to temporarily suspend flight services at the Chhatrapati Shivaji Maharaj International Airport (CSMIA) was taken in consultation with the Airport Authority of India (AAI).

As cyclonic storm Nisarga lashed the coast of Maharashtra on Wednesday, NCP chief Sharad Pawar urged his party workers to help people at the time of the natural disaster. In a statement, Pawar noted that the cyclone has caused severe damage to public and private properties and asked NCP workers to help those affected by the phenomenon. Meanwhile, taking to Twitter, NCP MP from Baramati Supriya Sule urged people living in the coastal areas to remain indoors and abide by the state government's instructions. A severe cyclonic storm, with a speed of 100-110 kmph gusting to 120 kmph, made a landfall at Alibaug in neighbouring Raigad district, impacting Mumbai, Thane, Palghar, Ratnagiri and Sindhudurg.