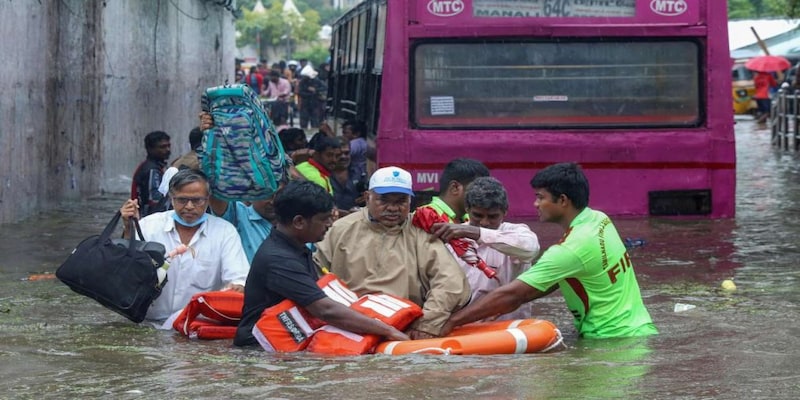 Chennai rains: Schools and colleges in Chennai, Ranipet and Thiruvallu will be closed for the second day on Wednesday.

Parts of Chennai witnessed severe waterlogging as heavy rainfall continue to batter the city for the past two days. The India Meteorological Department (IMD) said heavy rainfall is likely to continue over Tamil Nadu, Kerala and Puducherry for the next five days.

Heavy showers caused inundation in a string of localities in the city and on the outskirts, while two persons were killed in rain-related incidents. According to reports, a man was electrocuted on Monday night and a woman died after portions of a residential building collapsed in the city’s northern area of Pulianthope. According to News 18 report, Tamil Nadu Chief Minister MK Stalin reviewed the monsoon preparedness across the state on Tuesday. He urged district administrations to be prepared with relief and emergency operation plans. Image: PTI
Schools shut
Schools and colleges in Chennai, Ranipet and Thiruvallu will be closed for the second day on Wednesday. Schools in Vellore, Kanjipuram, Vilupuram and Chengalpattu will also remain shut, ANI reported.

Waterlogging across Chennai
Dramatic visuals show a woman falling into an open manhole in Chennai’s Perambur on Wednesday as the streets were waterlogged after incessant rainfall. She was rescued by locals, who also placed barricades around open manholes in the area.