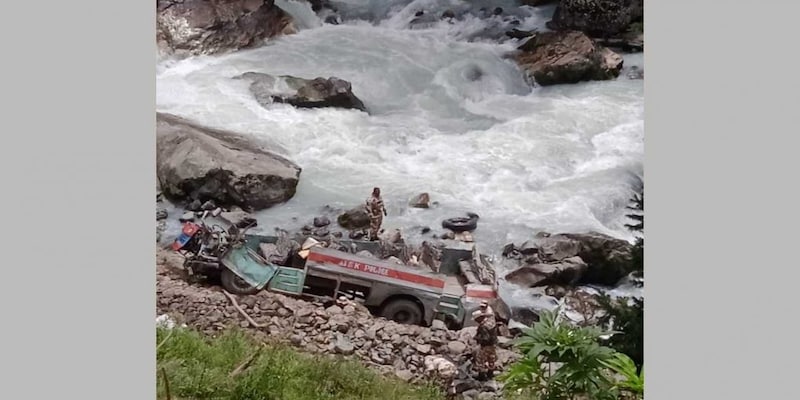 The troops were on their way from Chandanwari to Pahalgam. The jawans were deputed in the area for Amarnath Yatra.

At least seven ITBP personnel died while several other personnel received injuries when their bus met with an accident at Frislan in Pahalgam, Jammu and Kashmir. A civil bus carrying 37 personnel from Indo-Tibetan Border Police (ITBP) and two from Jammu and Kashmir Police force fell down to a roadside river bed after its breaks reportedly failed.

"Seven of our jawans have lost their lives in the accident. Eight jawans with serious injuries have been airlifted to Srinagar for medical treatment, and others are being treated at a hospital in Anantnag," said Director General ITBP, SL Thaosen.

6 ITBP personnel have lost their lives, several injured after a bus carrying 37 ITBP personnel and 2 Police personnel fell into riverbed in Pahalgam pic.twitter.com/7QjiswkUnt

The troops were on their way from Chandanwari to Pahalgam. The jawans were deputed in the area for Amarnath Yatra, news agency ANI reported.
"Our six jawans have lost their lives, and 30 were injured. We will provide the best possible treatment to the injured. ITBP HQ is keeping a watch on the situation. The jawans were returning from Amarnath Yatra duty. All help will be provided to affected families," said the ITBP PRO.

"30 people are injured," said Dr Syed Tariq of Government Medical College, Anantnag.
The deceased ITBP personnel were identified as Head Constable Dula Singh (Taran Taran, Punjab), Constable Abhiraj (Lakhisarai,Bihar), Constable Amit K (Etah, Uttar Pradesh), Constable D Raj Shekhar (Kadapa, Andhra Pradesh), Constable Subhash C Bairwal (Sikar Rajasthan), Constable Dinesh Bohra (Pithoragarh, Uttarakhand) and Constable Sandeep Kumar ( Jammu, Jammu and Kashmir).
President Droupadi Murmu expressed her condolences over the tragic incident. "The tragic loss of precious lives of ITBP personnel in the unfortunate accident at Anantnag, J&K, fills me with sadness. My heartfelt condolences to the bereaved families. I pray for the speedy recovery of the injured."
Jammu and Kashmir Lt Governor Manoj Sinha too prayed for the speedy recovery of the injured personnel. "Deeply anguished by the bus accident near Chandanwari in which we have lost our brave ITBP personnel. My condolences to bereaved families and prayers for the speedy recovery of the injured. All possible assistance is being provided to the injured personnel."
Congress MP Rahul Gandhi joined the leaders expressing his condolences. "The news of a bus carrying 39 ITBP personnel falling into a gorge in Pahalgam area of Jammu and Kashmir is very sad. I wish the injured jawans a speedy recovery and peace to the souls of the martyred jawans and express my deepest condolences to the bereaved families," Gandhi tweeted.