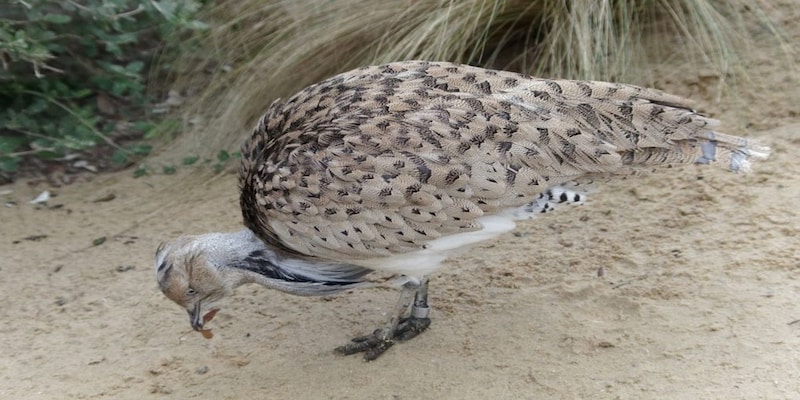 The 'suspicious' Asian Houbara Bustard was caught near Longewala in Rajashtan, close to the India-Pakistan border, on Thursday morning by the Border Security Force (BSF) troops. Sources from the BSF said the matter is being examined.

A suspicious bird that had rings on its leg was caught close to the India-Pakistan border in Jaisalmer district, Rajasthan.

The Asian Houbara Bustard was caught near Longewala on Thursday morning by the Border Security Force (BSF) troops. Sources from the BSF said the matter is being examined.
In August last year, a pigeon with a small piece of paper containing a 'contact number' wrapped around its leg perched itself on a BSF jawan's shoulder at the Rorawala post in Punjab. The pigeon had allegedly flown across the border, an official had said.
The BSF had sought to register an FIR against the intruder and the Punjab police was seeking legal advice regarding the same.
The BSF personnel handed the pigeon to the police demanding in writing for legal action to be taken.
A police officer said the BSF had demanded an FIR be registered against the pigeon. The officer had said that as the pigeon is a bird, it was not possible to file an FIR against it, but the matter had been referred to legal experts and the number written on the bird's leg was also being analysed. The pigeon was kept at the Khangarh police station.
Pigeons have previously been captured as well in the border areas for suspected espionage attempts. Homing pigeons can be used to send across information and the tags can contain coded messages. Or the birds can be at no fault, and have identification numbers written on them by their keepers.
Also Read: Wet Diwali likely for Bengaluru as heavy rains continue to lash IT city
Check out our in-depth Market Coverage, Business News & get real-time Stock Market Updates on CNBC-TV18. Also, Watch our channels CNBC-TV18, CNBC Awaaz and CNBC Bajar Live on-the-go!