"Mobile internet services were suspended in these districts till Saturday morning to prevent the spread of fake news that could foment trouble," PTI quoted home Secretary CVD Diengdoh as saying.

Meghalaya government has extended the suspension of mobile internet and data services in seven districts by another 48 hours. pic.twitter.com/lVOJD7F0s9

Violence in Shillong
The decision was announced after fresh violence erupted in Shillong over the death of six people in a shooting incident on Tuesday. According to PTI, a candlelight vigil and sit-in protest were held by different organisations, including the Khasi Students Union, and the Federation of Khasi Jaintia and Garo People, on Thursday.
During the protest, some people torched a traffic booth in Shillong and attacked three police vehicles, including a city bus. Protesters allegedly hurled stones and petrol bombs at the police forces stationed to calm the situation, news agency ANI reported.
ALSO READ | Assam-Meghalaya border violence: Vehicle movement restricted after tension escalates | What happened
Police said they had to use tear gas shells to bring the situation under control.
Seven people, including four police personnel, were injured in the clash between the angry protesters and the police, Superintendent of Police (City) Vivek Syiem told PTI. "Those behind the violence were yet to be identified," police said.
Several organisations in Meghalaya have announced a "non-cooperation movement" on Friday across the five hill districts. 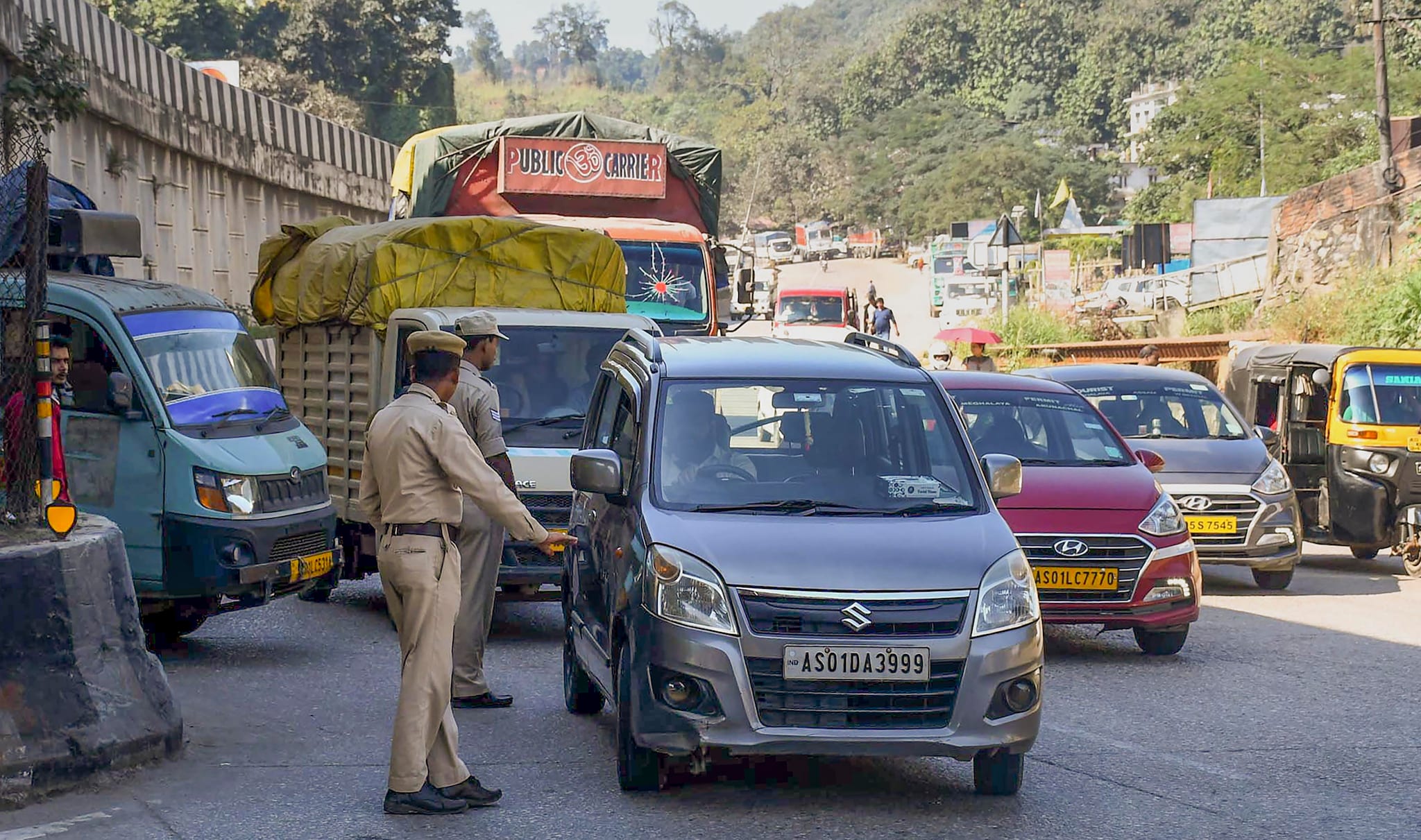 Assam Police personnel stopped Meghalaya-bound vehicles for safety reasons a day after the violence at a disputed Assam-Meghalaya border location that killed six people in Jorabat on Wednesday, Nov. 23, 2022. (PTI Photo)
What happened on Tuesday
Six people were killed after violence erupted near the border between Assam and Meghalaya early Tuesday after forest guards from Assam intercepted a truck allegedly laden with illegally felled timber. The alleged clash occurred in the area bordering the West Karbi Anglong district of Assam and Mukroh village in Meghalaya's West Jaintia Hills.
ALSO READ | Assam-Meghalaya border clash: What is the 50-year-old dispute about?
Assam Police officials said a forest department team intercepted the truck in the West Karbi Anglong district. A mob from Meghalaya later attacked the forest guards and policemen from the state, which led to firing by the Assam side to bring the situation under control.
Of the six people killed, five were tribal villagers from Meghalaya, and one was a forest guard from Assam. 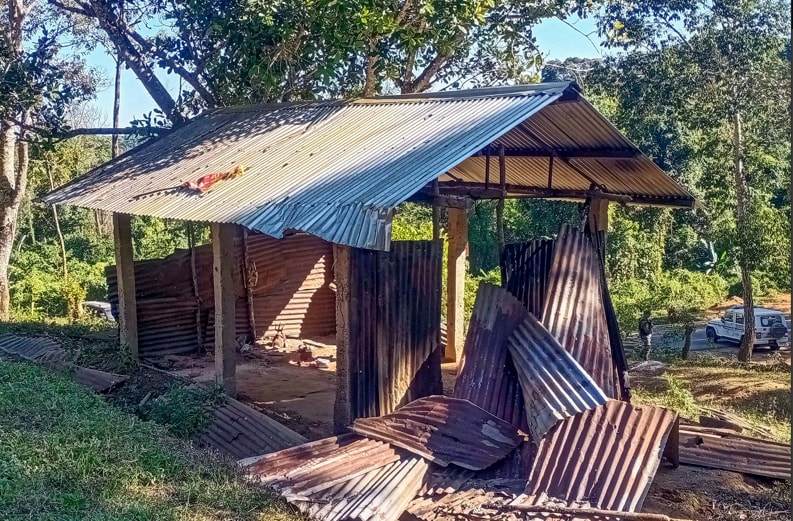 West Karbi Anglong: Remains of a temple after miscreants vandalised it following violence at a disputed Assam-Meghalaya border (PTI Photo)
Other top developments in the Assam-Meghalaya violence issue
> The Assam Petroleum Mazdoor Union (APMU) sent letters to all PSU oil marketing companies, including IOC, HPCL and BPCL, informing them about its decision not to load fuel in tankers meant for Meghalaya. The union raised concerns over the safety of Assam vehicles in Meghalaya amid violence following the killing of six people at the inter-state border
"Our drivers and handymen were attacked when there were disturbances in Meghalaya earlier. Some of them were critically injured. They have become handicapped for their whole lives. We cannot retake any risk," Assam Petroleum Mazdoor Union (APMU) general secretary Ramen Das said.

Visuals from Jorabat - entry point to Meghalaya along Assam-Meghalaya border where Assam police restricted vehicular movement. Only vehicles with Meghalaya's registration are being allowed entry into Meghalaya, in the aftermath of a firing incident that killed 6 people in Mukroh. pic.twitter.com/e5uS4aZwe3

> Following the union's statement, officials said late Thursday that the Meghalaya government was arranging police protection for trucks transporting essential commodities and oil tankers from Assam. Food and Civil Supplies director Pravin Bakshi also directed the arrangement of police escorts to such vehicles.
> Hundreds of cars were spotted waiting at the petrol pumps as people scrambled to fill tanks, fearing shortage. The queues of cars led to traffic snarls in Shillong and some other parts of the state. East Khasi Hills District authorities issued notification, saying that "in view of rumours of shortage of petrol and diesel, long queues have formed at petrol outlets."
> Meghalaya CM Conrad Sangma denied reported of fuel shortage and tweeted: "There is no shortage of petrol and diesel in Meghalaya. Necessary actions have been initiated by the Government to ensure no shortage of stocks and supply. Request all citizens to not resort to panic buying of any essentials."
> Meanwhile, Assam continued to 'advise' people from the state not to travel to Meghalaya as the "situation is not very good".  Deputy Commissioner (East) of Guwahati Police Sudhakar Singh said non-Assamese people have been travelling to Meghalaya, but they are being asked to go in vehicles that do not have Assam registration number plates.
> The Assam government on Wednesday handed over the body of the forest guard to his family members after post-mortem, the officials said.
(With inputs from agencies)
Check out our in-depth Market Coverage, Business News & get real-time Stock Market Updates on CNBC-TV18. Also, Watch our channels CNBC-TV18, CNBC Awaaz and CNBC Bajar Live on-the-go!