The death toll in floods in Assam has risen to 73 with two more deaths reported Friday morning. In the past few weeks, floodwaters of the rain-swollen Brahmaputra and its tributaries affected nearly 37 lakh people in 26 districts, gulping down roads, villages, animals and farmlands.

The death toll in floods in Assam has risen to 76 according to the latest data. In the past few weeks, floodwaters of the rain-swollen Brahmaputra and its tributaries affected nearly 37 lakh people in 26 districts, gulping down roads, villages, animals and farmlands.

According to the Assam State Disaster Management Authority (ASDMA), Dhubri, Barpeta, Morigaon, Lakhimpur, Darrang, Golaghat, Goalpara and Bongaigaon are the worst affected districts - over 8.7 lakh people have been affected in Dhubri alone.
A total of 3,201 villages under 92 revenue circles have been swamped by overflowing rivers. Images showed houses submerged to roof-level and farm animals confined in sheds unable to move. A herd of elephants crossing National Highway while fleeing floods in Kaziranga. PHOTO Credit : Biju Boro
“We are facing a tough time, and we are all together again - the houses in our village are under water, our cattle and livestock are stranded in submerged homes along with hundreds of people. If the animals are not evacuated, they will drown. This is what happens every year,” said a local resident of Joghighopa town of Bongaigaon district on the northern bank of the Brahmaputra. 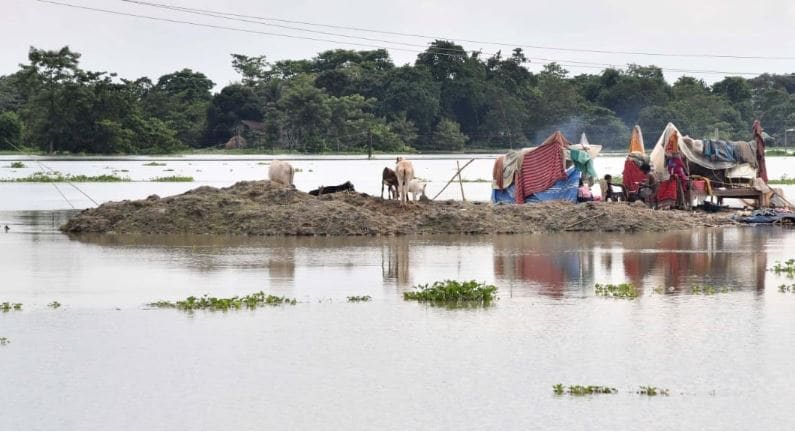 Houses submerged in Assam’s Morigaon district, humans and cattle take shelter together. PHOTO Credit : Biju Boro
“We cannot step out of our dwelling as the entire village is inundated. There are about a hundred families living here. We have tied our animals at the relief camp and staying at our home as there is not enough space at the camp,” said 35-year-old Anwar Ali of Chandanpur village in Barpeta district.
More than 360 villages in Barpeta have been affected in the second wave of floods this year. 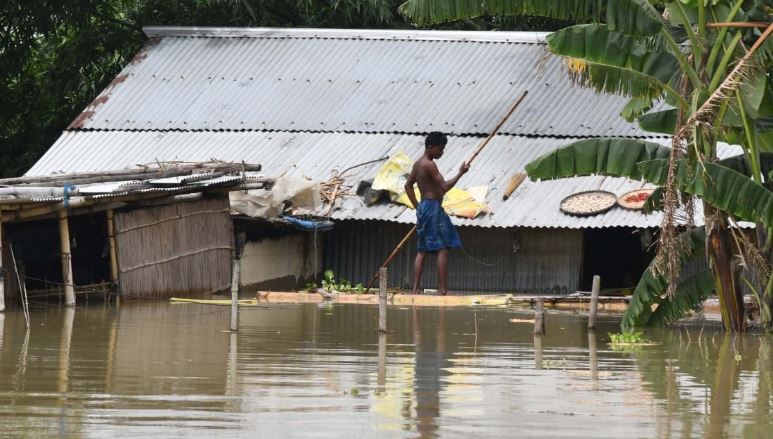 Houses submerged in Assam’s Morigaon district. PHOTO Credit : Biju Boro
In latest reports, more than 20 lakh big and small farm animals, and 12.85 lakh poultry have been affected by floods in different districts. These include dairy cows, pigs, goats, chickens, ducks and geese.
The ASDMA report on Friday stated 49,977 people took shelter in 300 relief camps across 24 districts - 4,526 children from several villages of Goalpara district were living in temporary relief camps with their parents.
As many as 445 relief distribution centres have been stocked with rice, pulses, salt, mustard oil, wheat bran supplies, besides baby food, tarpaulin, cattle feed, sanitary napkins and other essentials for flood-affected people.
“We are facing acute shortage of drinking water and no access to basic sanitation. The situation is unbearable and you are talking of following Covid-19 protocols?” remarked a flood victim in Moirabari town of Morigaon district when asked if people were following Coronavirus guidelines issued by district authorities.
“This is not a new scene, we are a cursed village since past 20 years and our local representative has done nothing to help either. We need ration and proper shelter,” said Rimon Brahma, a school teacher in Sikarbil village of Kokrajhar district who paid a visit to the relief camp.
“We are expected to be cautious regarding Covid-19 pandemic, but there are so many problems - the children in relief camps venture out after their parents leave for work. They are daily wage earners. The kids can’t stay hungry. We need nutritional food for the little ones,” Brahma mentioned, adding that their lands were washed away by the raging Gongia River that flows downstream from the Bhutan Hills.
To protect their homes from flood and erosion, villagers living along the banks of the river conducted traditional ‘Bathou Puja’ by offering prayers to River Goddess Ganga.
In Kaziranga National Park, 86 animals have died in floods this monsoon. According to officials, more than 85 percent of the park remains flooded and 80 of the 233 anti-poaching camps were submerged in water.
Though time cards have been issued to regulate speed of vehicles plying along the national highway, 14 Hog Deer have been killed by speeding vehicles. Four rhinos drowned in flood waters inside the park while many have been displaced.
Three tigers that moved out of the park sought shelter in the fringe villages and were guided back into the forest. So far, 125 animals including a Royal Bengal tiger and a rhino calf have been rescued by forest officials and the Wildlife Trust of India-Centre for Wildlife Rehabilitation and Conservation (WTI-CWRC) members with the help of locals.
Teams of the National Disaster Response Force (NDRF) and State Disaster Response Force (SDRF) assisted by the civil administration are engaged in rescue and relief operations in the flood-affected areas. Around 130 boats have been deployed for rescue work, and 2,918 people have been evacuated to safety in the past 48 hours.
Wearing special PPE suits, the rescue personnel were also distributing masks to the marooned and screening them for symptoms. The rescue boats are sanitised after every mission, and though maintaining social distancing is difficult in relief camps, local authorities are urging people to follow the public health practice to reduce chances of disease transmission.
(With inputs from Haantigiri Narzary)
Check out our in-depth Market Coverage, Business News & get real-time Stock Market Updates on CNBC-TV18. Also, Watch our channels CNBC-TV18, CNBC Awaaz and CNBC Bajar Live on-the-go!