Updated : October 31, 2019 06:58 PM IST
Port Muziris, the ancient city famous for its seaport, from which the hotel derives inspiration, is being restored by the Kerala government.
Design, art, experiences and food – all four facets of travel at Port Muziris, Kochi draw liberally from the legacy of Port Muziris.

The hotels from the Marriott International group, particularly the luxury end of the business, cater largely to business travellers. For all their upscale offerings, they are pretty much cookie-cutter, differing somewhat in design or cuisines offered. But if you have stayed in a Marriott, you know what to expect. Rarely do you come across a hotel that is fiercely independent in design, its approach to a destination and the provincial culinary heritage. However, when Marriott International took over Starwood Hotels in 2016, they also inherited the Tribute Portfolio, the latter’s “soft brand of independent, characterful hotels” which are anchored on design, packed with little details that reference the destination, infused with art and offer native culinary experiences of the destination.

Located in cities across Europe, North America, South America, and with a few in Asia, Marriott International’s first Tribute Portfolio hotel in South Asia opened in Kochi, in May 2019. Surprisingly, while its general manager Harish Gopalakrishnan says that it is a “leisure hotel” which works well as the first stop for travellers exploring Kerala, the hotel stands quite close to the airport – in fact, within a seven-minute distance.

In a city where most discerning tourists choose to stay in Fort Kochi, the aim to attract leisure travellers is quite ambitious. Gopalakrishnan contends, “Our tagline says, ‘Your Kerala starts here’. We help familiarise people not familiar with Kerala, or Kochi, and to understand its culture in a contemporary setting.”

Here are three reasons why Port Muziris, Kochi is a peek into the lost world of Muziris.

The Muziris in the name is derived from an ancient harbour town with an important seaport on the global spice route. This antediluvian port town on the picturesque Malabar Coast was a crucial link between the sprawling spice fields of southern India and countries and continents as far-flung as Persia, the Middle East, North Africa and the Mediterranean region. It is through Muziris that the Jews, the Greeks, the Romans, the Portuguese, and later the Dutch traders entered Kerala, many settling here for a while (like the Dutch and the Jews) and leaving their indelible mark on the architectural heritage and culture (a lot of which survives in Fort Kochi).

The Kerala government launched the Port Muziris Conservation Project a while ago, encouraged by the success of Kochi-Muziris Art Biennale, which brought in cultural and art-inclined travellers to the city. With Port Muziris, Kochi, you can intimately experience the landmarks of ancient Muziris, strewn all across the river Periyar — an old Jewish synagogue; Portuguese-era churches; ruined forts where the Dutch — who fought the Portuguese in 1663 to become the new rulers of the Malabar Coast — kept an eagle-eye on the ships that sailed past; and the striking Paliam Palace, once

home to the Paliam family, a Nair-Menon clan, generations of which served as Prime Ministers to the former Maharajas of the state of Kochi — have been restored and are now part of Kochi’s heritage travel circuit.

“This hotel, then, attempts to offer an insight into the heritage of Muziris. Most travellers head out to Fort Kochi, the colonial heritage enclave. We try and highlight Muziris’s heritage through our design, culinary offerings and experiences,” he says.

Port Muziris, Kochi builds an interesting narrative of the hotel as a private home of Lila, the imaginary muse and mascot conceptualised by Twenty 14 Holdings and created by Studio HBA — purportedly a London-based artist whose mother grew up in Mattancherry, in Fort Kochi, and moved to the British capital city after marriage. She is a treasure house of stories about Muziris and its legion of sailors and traders.

The design and theme have been conceptualised by Twenty 14 Holdings, which is the owning company.

The brief given to Singapore-based design atelier, Studio HBA, headed by Rahul Shankhwalker, was to design the hotel as Lila’s interpretation of this vibrant Muziris of the past, which she only knows through her homesick mother’s fascinating tales. The hotel was designed by Abhishek Mathur from Studio HBA.

The art-infused hotel is a sensory delight: the colours are earthy mustard and indigo; the cosy lobby resembles a living room with its larger-than-life painting of the tropical Malabar Coast by Shahul Kollengode, which reminds me of the works of the great Sri Lankan artist, Senaka Senanayake. The 70 curated art pieces in the hotel, commissioned to artists who grew up in Kerala, portray the landscape around

Muziris – herons in freshwater ponds; ‘Pearl and Ivory’, a painting by Vishnu M Nair, who depicts the old tale of pearls as large as elephants being traded; a 3D work of a fisherman selling his fresh catch of crabs and tropical hand-painted terracotta tiles, among others. Across the hotel, the art is on the canvas, on the walls, and also in flamboyantly coloured elephant figurines.

Kettle, the tearoom, has striking black and white photographs of the actual excavation site of Port Muziris. Port Muziris, Kochi’s signature experience is an exploration of the endless remains of the one powerful port city studded with wooden homes, churches, palaces and synagogues. The landscape is depicted in a minimal, pared-down, contemporary style at Port Muziris, Kochi. The suites, like much of the hotel, are art filled with tropical paintings defining the walls. 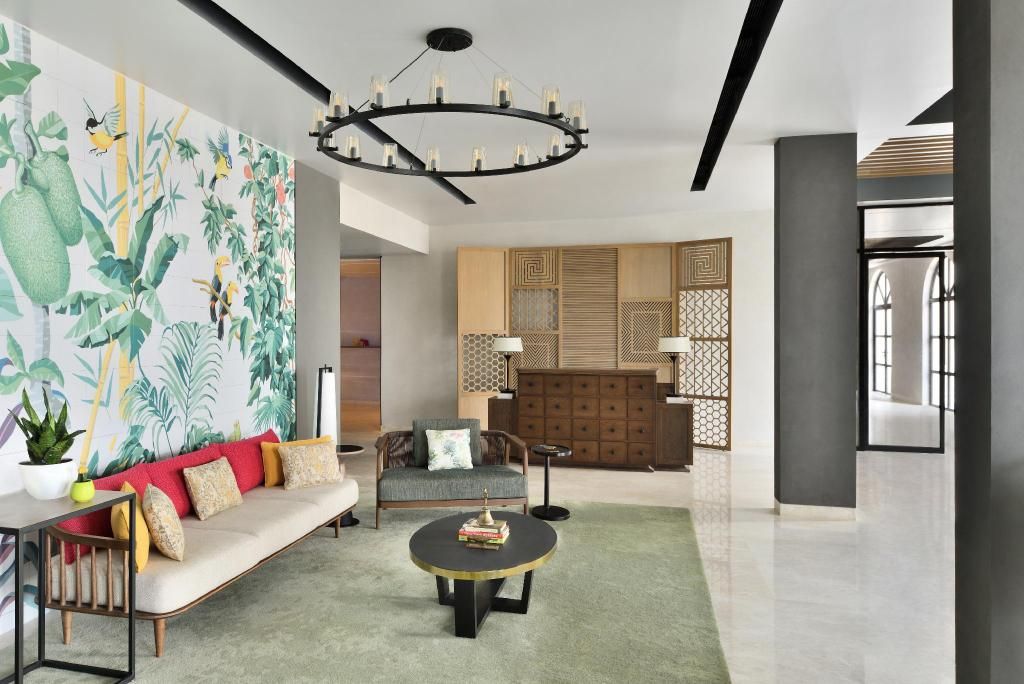 Port Muziris, Kochi does not have a liquor licence given Kerala’s restrictive liquor regime (although guests desiring a drink can head to its sister property, Courtyard by Marriott next door). Instead, guests are treated to an unusual tea tasting session at Kettle, the tea lounge, where the cellar holds several varieties of teas inspired by Muziris’ spices and floral heritage. Jasmine, a common flower around these parts, lends itself to a delicate tea. Hibiscus-imbued tea leaves, a green variant flecked with saffron, the not-to-be-missed blue tea made by infusing tea leaves with the butterfly blue pea flower and lavender-infused teas are part of the extensive cellar. I would personally recommend simple seafood and a vegetarian meal cooked up by a home chef at a little place fronting the river Periyar while you are on a Muziris expedition. The flavours are simple and the setting on the river is charming. But the hotel, too, runs the Lila’s Kitchen, an all-day diner where Executive Chef Ashok Eapen serves up authentic cuisine from these coastal parts. “There is no fusion, no reinterpretation; the food is cooked using the spices and techniques which are age-old,” he says. Chef Eapen and his team of chefs travelled extensively across the coastal areas around Port Muziris, meeting grandmothers and mothers, ferreting out recipes, even stopping over at temples to learn and understand how the offerings are cooked.

“We serve several family recipes that are no longer cooked as much and may soon be history unless someone documents them,” he says of a culinary heritage that blends Mopala, Syrian Christian and traditional Hindu cuisines. “You see Arabic influences on Mopala cuisine. Some of the recipes have never been cooked outside homes before; a few dates back to the days when Muziris flourished.” In the kitchens is also Chef Maria, a home cook who used to run a restaurant with her husband, and brings to the hotel a rich heritage of local recipes.

There are several native culinary gems on the menu. The Nandan Njandu (crab) curry is a tangy and spicy coconut milk curry, best eaten with the Kuthari Choru (red rice), while Chemmeen or prawn curry is simmered in coconut milk and spiced with fenugreek, shallots and mustard seeds. Meen Mulagittathu, a spicy and sour fish curry, is cooked using ingredients like whole red chillies, kokum and tamarind. Karimeen Pollichathu or Pearl spot fish is liberally smeared with an onion-tomato-spice masala, wrapped in a banana leaf, and then grilled. Kaya Kadala Curry, or a raw banana and chickpea curry, is seasoned with fennel and cumin and tempered with mustard seed and red chillies. Koon Ulli Theeyal is a fresh mushroom and pearl onion curry cooked in unusual tamarind-and-jaggery gravy and topped by charred coconut bites. The delicate Pacha Manga Karri, which marries spicy and sour flavours of green chillies and raw mangoes, is simmered in sweet coconut milk and seasoned with mustard. But the one dish that stands out because of its rarity is the Erivulla Malli Kozhi, a traditional Jewish curry. “The word ‘piralan’ or ‘purattiyathu’ means ‘coated ‘or ‘covered’. The harmonious blend of exotic spices perfectly enhances the tenderness of the cooked meat,” rhapsodises Chef Eapen.

As textured and layered as the history of Muziris, this little hotel has to be discovered bit by little bit – you could spend hours unravelling the motifs, symbols and stories that lace the art pieces, for instance, or converse with the chefs about how the several different culinary styles that are infused with flavours of Muziris’s past as a global port city, today defines Kerala’s coastal cuisine.