In semi-rural Karnal, Noor Mahal, a palace hotel, brings in a touch of luxury and royal living

Updated : November 25, 2019 03:37 PM IST
It draws in corporate crowds from Delhi and NRIs who flock to Punjab during the wedding season.
The young duo of Ozone Designs recreates Rajputana design flourishes and Mughal architectural elements at the hotel.
Invest India forecasts an investment of $50.5 billion in the hospitality industry by 2028, some of which will be made in the hinterlands.

As I drive past the sleek albeit regimented city of Chandigarh, the urbanscape transforms into villages, little towns and lush fields, till the car glides into the boundaries of Karnal, on the edges of Haryana. Mythology indicates that Karnal was founded by Karna, the brave warrior of Mahabharat. History suggests it saw a battle between Nader Shah of Persia and Mughal emperor Mohammed Shah. Further research revealed that some British officers and their beleaguered families escaped to this town during the Indian Rebellion of 1857.

Nothing in modern-day Karnal, located on the old course of Yamuna, is suggestive of its storied past. This historic walled city of a little over 3 lakh people may have been voted among the cleanest in Haryana, but to me, it looked like any nondescript, deadpan suburb outside Delhi, a Surajkund or maybe even Noida. With just one exception: fields of wheat and fruit orchards fringe the NH01 highway connecting the capital city to Karnal. And another exception: it is home to Noor Mahal, a palatial luxury hotel in midst of a bucolic semi-rural settlement with residents who are clearly affluent, going by the patina of urban-esque homes I drove past. 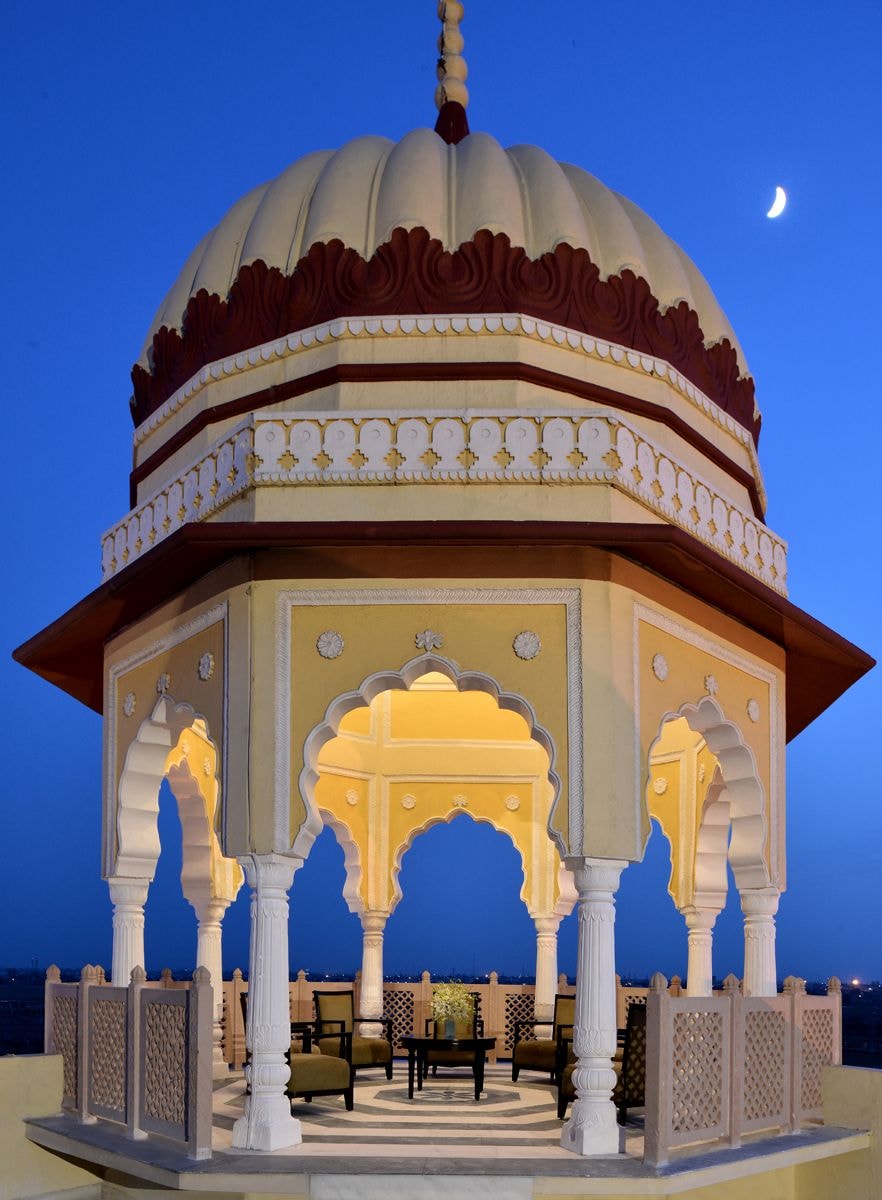 So, why would one open a hotel as opulent as this in Karnal, which lies mid-point between Chandigarh and Patiala (once home to the Maharaja of Patiala), somewhere north of Delhi? Clearly because luxury is now experiential; you drive for about two hours from home to reach a destination (better still a destination hotel) to get away from the crowds. Invest India, a GOI initiative, forecasts an investment of $50.5 billion in the hospitality industry by 2028. Some of this investment will be in the hinterlands, in town and cities such as Karnal, which are now part of a widening road and flight network linking most of India. Every hotelier will tell you that with the slash in GST rates, a growing network of fabulous highways and roads, and even airport connectivity, the hinterlands are set to boom. The premium is already reaching out to these once-neglected regions; luxury is not far behind.

Col. Manbeer Choudhary, an ex-army man and the founder-owner of Noor Mahal, leveraged the inherent potential to build the mother-of-all-hotels in this part of the country. “My earlier stint with The Federation of Hotel & Restaurant Associations of India (FHRAI) made me realise that India is booming. The town and cities on the fringes of Jaipur had latched on to this reality a long time ago and hotels such as Neemrana and Fairmont Jaipur are considered as destinations in themselves. Across India, many cities have developed self-sustaining luxury circuits; we had none in these parts. Besides a JW Marriott in Chandigarh, we do not have any luxury hotels right up to Punjab. My idea was to create a monopoly for MICE and luxury weddings in these parts. Besides, I wanted to avoid competition with groups such as ITC, Taj and Oberoi.”

Noor Mahal, then, attracts the corporate crowd from Delhi and Gurugram, besides weddings from the neighbourhood, but also Punjab (Punjabi/Sikh NRIs need something closer home to get married in!) and regions far apart, including West Bengal!

The challenges of running a luxury hotel in Karnal may be several, one would think. For one, politics, especially when you consider that land usage was changed from agricultural to commercial? Col. Choudhary disabuses me of the notion, contending that the then Congress government had encouraged him to build “an asset Haryana had never seen”. The challenges, then, lay in attracting the right talent and marketing the property as a destination hotel. At one point, says Chaudhary, they had almost begun feeling like a training school for hospitality professionals: young hospitality graduates would join them for training and then quit for a bigger brand. Now, of course, with various facilities provided to the staff as well as an insistence on experienced head of departments, the loss of manpower is far slower. A palace in the fields

Architecturally, Noor Mahal is more Rajasthan or Rajputana than Punjab or Haryana. Conceptualised by the late architect Nimish Patel of the Abhikram architectural studio, with interior design executed by Amey Kamat and Tushar Joshi of Ozone Designs, the palace hotel looks like it would fit right in, next to the ornamental palaces of Rajasthan. The hotel’s soul is Rajputana-meets-Mughal, echoing the regal lifestyle of the erstwhile Maharajas and Mughal monarchs. The brief given to Patel, says Chaudhary, was to create a royal outpost in an agrarian landscape, albeit a modern hotel with contemporary amenities. He created one with arches and domes, mirrors and frescoes studded with semi-precious stones, flamboyant chandeliers and airy courtyards, the famous Tikdi work, rambling verandahs, velvet curtains referencing the patterns on regal ensembles, vegetable-coloured hand paintings, and picturesque terraces. The Chaudharys threw in an extravagant wedding pavilion as an add-on for the destination-wedding obsessed Indian junta. Binny Chaudhary, Col. Chaudhary’s wife, who liaised with the designers and the architect, says, “The little detailing, the historical flourishes, are what makes this hotel stand apart.” Joshi, outlining the design, which he and his partner, Amey, constantly upgrade as per the brief, says, “The features, the fixtures, the design all speak of traditional craftsmanship and India’s artisanal heritage. We got kaarigaars (artisans) from not just but also Sahranpur in UP (famous for woodwork) as well as locally.” Built over multiple levels, much like the palaces of yore were constructed, the hotel sprawls over eight acres, surrounded by fields and well, more fields. It straddles within its well-appointed boundaries, party lawns (Rani Bagh and Raja Bagh, anyone?), Hiran Mahal or golden towers with octagonal chhatris, ballrooms with frescoed walls such as Sheesh Mahal and Rang Mahal, not to forget two inner courtyards called Deewan-e-aam and Deewan-e-khas, just so that you never forget the royalty connect. But the space that I find fascinating is the Awadhi restaurant, Frontier Mail, a sublime recreation of the famous train that ran from Colaba, in Mumbai, right up to Peshawar, which is now in Pakistan. It had one dining bogey. Joshi and team recreate the magic of those times when travelling in trains was an experience filled with beauty and magic. “We wanted actual wagons to host the restaurant. However, the structure would not have been able to take the load. So, the interiors team fabricated the Frontier Mail wagons,” says Col. Choudhary. “Kaarigars were invited from Saharanpur. Much of the crockery and cutlery are from the original Frontier Mail. The walls are peppered with photographs of the train, sourced from the National Museum of Railways,” according to Joshi. 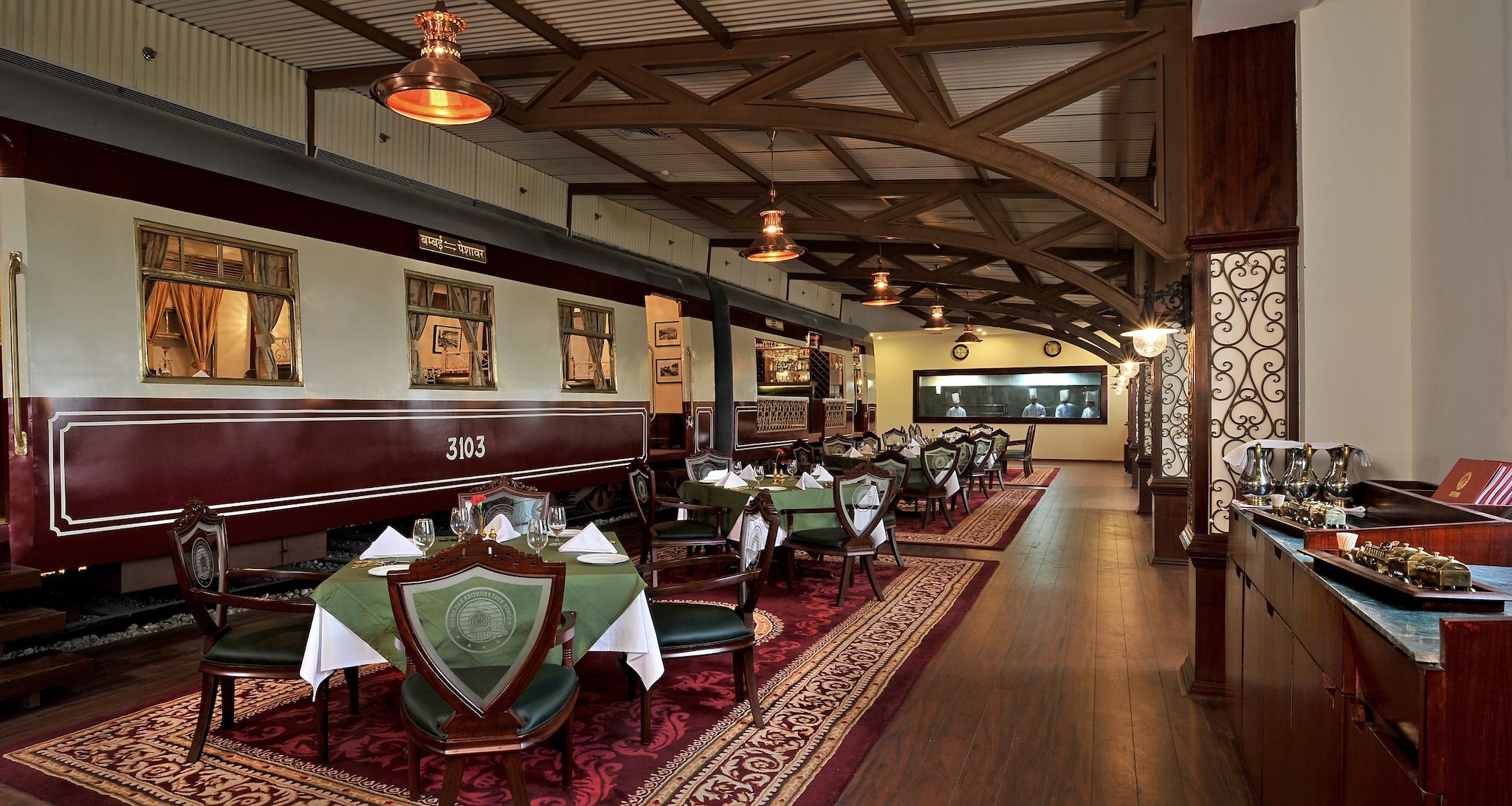 Those well-versed with Rajasthan will be able to draw some references with the lavish havelis of the Marwari businessmen in regions of Narwar and Shekhawati. “Between 1830 and 1930, well-heeled Marwaris built gigantic buildings, which carry the architecture of the Mughals in their style. The Shekhawati haveli consisted of two courtyards; the outer courtyard meant for men and an inner courtyard for women. Havelis also carry marvellous frescoes on each side, with a single main gate,” says Joshi. “The challenge lay in sourcing the right skilled craftsmen.”

If you do find yourself in this atmospheric modern-day palace within rural tranquility some-day, make sure you spend an evening out near the swimming pool. The views of the fields are marvellous and the hotel, with its sweeping chhatris and airy domes, makes for a striking backdrop to swim against. The setting sun leaves its imprint on a façade that looms large in the countryside.