The human tragedy of COVID-19

The global COVID-19 death toll has crossed the half-a-million mark. And the killer virus so far has shown no signs of slowing down, as can be seen from the second wave that has hit many cities across the globe.

In India, the number of positive cases has crossed the half-a-million mark, with over 15,000 lives lost so far.

There are arguments about testing numbers, fatality rate, recovery rate, and so on and so forth, but the bottom line is that the number of positive cases is rising at a steady pace.

As a result, most economies are in a precarious situation because of the steep fall in production and an equally steep rise in unemployment levels. Normalcy will take months, if not years to return.

In India, beginning March 25, the lockdown lasted for 75 days in five phases.

And the economic cost of this:

According to the Asian Development Bank, our economy is likely to suffer a loss of $29.9 billion.

According to official data, the output of eight core infrastructure industries declined by a record 38.1 percent in April due to the coronavirus-induced lockdown.

There is hardly any sector that has not been affected by the nationwide lockdown. And while many industries have slowly resumed operations, consumers have been gripped by a fear psychosis, with the result that demand will take some time to return.

According to the Centre for Monitoring Indian Economy (CMIE), the COVID-19 crisis has led to a spike in the country’s unemployment rate to 27.11 percent for the week ended May 3, up from the under 7 percent level before the start of the pandemic in mid-March. The unemployment rate has since improved to 8.48 percent. It is mostly the low-end jobs that have come back.

The Mumbai-based think tank said the rate of unemployment was the highest in the urban areas, which constitute the greatest number of the red zones due to the Covid-19 cases, at 29.22 percent, as against 26.69 percent for the rural areas.

The worldwide pandemic prompted leading economies of the world to announce relief packages to support the industry and to mitigate the suffering of their working populations. The economic packages announced were:

India was not far behind.

On March 26, two days after the lockdown was announced, Finance Minister Nirmala Sitharaman announced the first tranche of the relief package for the poor. The Prime Minister Gareeb Kalyan scheme worth Rs 1.7 trillion (Rs 1 lakh 70,000 crore) with the following salient features:

In May, a further package was announced and the total relief committed was in excess of Rs 20 lakh crore – nearly 10% of the GDP, matching with the top economies of the world.

A BIGGER LOSS - THE TRAGEDY OF THE MIGRANT WORKER

A nation’s strength lies in its people, and for a nation of our size, the biggest strength is our population.

And yet, while planning the lockdown, it seems that this one factor did not get the attention it deserved.

What was the magnitude of the problem?

The Economic Survey of India 2017 estimates that the magnitude of inter-state migration in India was close to 9 million annually between 2011 and 2016, while Census 2011 pegs the total number of internal migrants in the country (accounting for inter- and intra-state movement) at a staggering 139 million. Uttar Pradesh and Bihar are the biggest source states, followed closely by Madhya Pradesh, Rajasthan, Uttarakhand, Jammu and Kashmir and West Bengal; the major destination states are Delhi, Maharashtra, Tamil Nadu, Gujarat, Andhra Pradesh, and Kerala.

One report from CMIE states that due to the lockdown curbs, 122 million people lost their jobs. Of these 91.3 million were small traders and laborers and 17.8 million were salaried people.

Large companies across various sectors -- media, aviation, retail, hospitality and automobiles -- announced massive layoffs. Some experts have predicted that many small and medium businesses are unlikely to reopen.

Although the Prime Minister made an announcement to that effect on the evening of March 24, it obviously did not reach them and did not have the required impact. A plan should have been drawn up to ensure that the message not only went across, but an implementation strategy worked out to make sure that the message of relief and its implementation got across to them. There should have been a time lag of 4-5 days between announcement of the lockdown and its commencement during which the message could have been conveyed to them effectively. A national announcement from the home minister or the labour minister directly through media, through the state governments and through their employers, would have given them the required confidence for them not to panic and rush back to their villages.

The government had on March 26 announced free food grain and cash for the poor. That the message did not get conveyed and implemented effectively was evident in Delhi from the scenes witnessed at the Anand Vihar Terminal when 10,000 – 15,000 people gathered there on March 27 to take the limited number of buses to Uttar Pradesh. The queues reported there were as long as 3 kilometers. Similar situations and scenes were reported from all metropolises and industrial hubs all over the country. As a result of extreme frustration, workers resorted to violence in several cities including Surat.

Whereas the government had every intention to hold the workers back, it is clear that the holdback could not happen which resulted in the chaos that followed till the month of May when the Shramik trains were started and lakhs/crores of people returned to their homes in panic. There was no plan in place on getting back those who were desperate to get back. Even when the trains started, there was no clarity – in fact, there were confusion and controversy on who was going to pay the fares. There was also an unfortunate political ‘tamasha’ made out of the whole episode.

There were sad stories about people traveling on foot, by cycles, and several other means in desperation just to get back to their homes. More than 300 people are reported to have died as a result of accidents and fatigue. Pictures shown in the media with children, infants in mothers' arms, people walking barefoot were heart rendering.

Ineffective communication to the crores of those rendered unemployed has broken the trust that people may have had in their employers and the government. Employers are equally to blame. Even without the government announcement, they could have assured the workers of at least one-month full support which would have stopped the panic that got created. If the migrants had got the assurance that they will not go hungry; not be pestered for rent; will have some cash incoming to survive with dignity, all this chaos would not have taken place.

Several countries in the world were in grip of the pandemic. Starting with March 10 when Italy went into lockdown, it was inevitable that India would also need to prepare for that eventuality. We had several weeks to plan this. There is a whole Disaster Relief Organization besides the think tanks in the government which with the industry could have planned this whole exercise of lockdown and measures required to be taken so that the nation does not go into a state of chaos and human tragedy.

Didn’t the employers feel that they have some moral responsibility to their employees who are a very important segment of their business/industry which helps them with their enterprise and based on whom they are where they are?

Didn’t the government feel their moral responsibility to ensure stability for 27 percent of the country’s low-income population?

Have we, as a nation, not failed to assure our brethren that their welfare will be taken care of?

The workforce is a very important part of the production system in the country. Let us not forget that the workforce is one of China’s great strengths on basis of which it has captured markets across the world by producing huge quantities of goods of all types cheaply and then exporting them, becoming a leading economic power in the world and resulting in their not ‘caring a damn’ about the rest of the world.

With the unlock 1 in operation, and in a desperate bid to bring the wheels of production in the running, we are now running special trains to bring the workers back to the industrial hubs. There are reports of employers willing to pay higher wages and even offering to pay airfares for the workers to come back to work. The Haryana government has announced an incentive of Rs 1500 to all returning workers as a reimbursement of their transportation cost, besides providing all other basic facilities.

And what did the assurance by the employers/government entail? 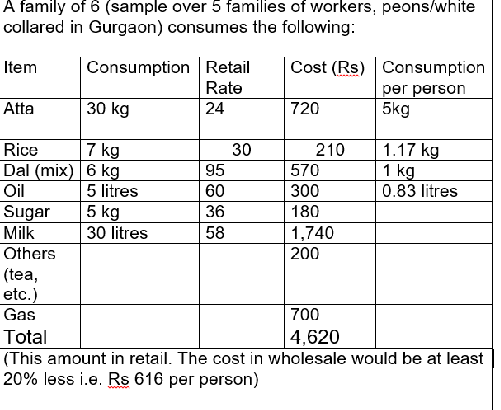 With a potential 37 crore migrant population, this would require Rs 22,792 crore per month – a sum which the government had set aside in the first instance. It was unfortunately the implementation which obviously was not effective.

With a mix of food items (directly) through the PDS and other channels, and cash through the employers, the problem could have been well handled and contained.

FOODGRAIN STOCKS – A PROBLEM OF PLENTY?

As on April 1, food grain stocks in the central pool stood at an all-time high of 73.85 million tonnes (mt), the highest ever for this date and three-and-a-half times the minimum operational-cum-strategic reserve requirement of 21.04 mt.

The 73.85 mt figure includes 24.70 mt of wheat and 32.24 mt of rice. In addition, the Food Corporation of India (FCI) and state government agencies were holding 25.24 mt of un-milled paddy, whose rice equivalent, at an out-turn ratio of 67 percent, worked out to 16.91 mt. (Out-turn is the share of rice extracted from harvested paddy grains after removal of outer husk and inner bran layers).

Rice stocks (inclusive of the milled paddy equivalent) were also at an all-time high of 49.15 mt and 3.6 times the normative minimum of 13.58 mt for April 1.

A lot of these stocks were lying in open storage.

Under the Pradhan Mantri Gareeb Kalyan Yojna, an extra 5 kg of wheat/rice was proposed to be given per person per month, free of cost, for a three-month period from April to June 2020. This would have entailed an offtake of 12.14 mt of wheat and rice.

The Pradhan Mantri Garib Kalyan Yojana (PMGKY) relief package, announced on March 27 to alleviate the distress of people most affected by the nationwide lockdown, would have helped whittle down some of the excess food grain stocks – particularly the ones lying in open-storage and subject to the risk of getting spoilt.