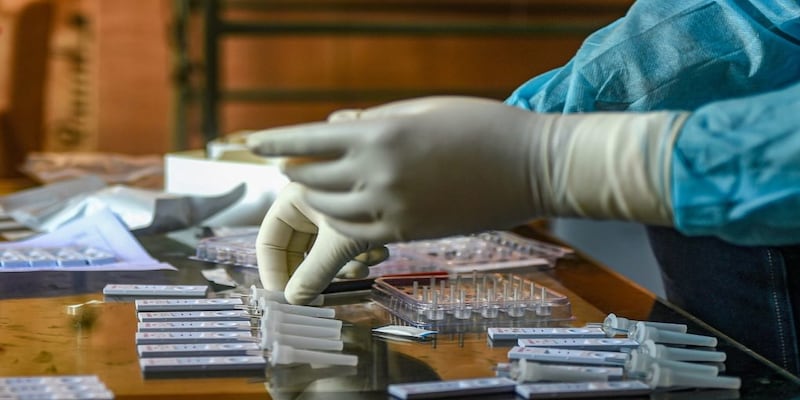 German medical tech company Siemens Healthineers is in the process of expanding its manufacturing capacity in India to locally produce testing kits for diagnosing COVID-19.

German medical tech company Siemens Healthineers is in the process of expanding its manufacturing capacity in India to locally produce testing kits for diagnosing COVID-19.

The company has also applied for a licence for its newly launched rapid antigen test kit with the ICMR and is awaiting approval, Vivek Kanade, executive vice president for Siemens Healthineers In India, told CNBC TV 18.
“We are expanding our manufacturing plant in Baroda to locally manufacture testing kits. Currently, all of these are being imported from our factories in Europe and US,” Kanade said. The plant is currently manufacturing reagents and entry-level blood analysers.
“We assess that the demand Siemens Healthineers will see in India will be about 6 million kits per annum for the next 12-24 months, and we have planned accordingly,” Kanade said.,
Siemens Health has already delivered 6.3 million RT-PCR testing kits in India over recent months, though all of these have been imported from the company’s global branches.
“We delivered 1 million testing kits to ICMR. We have also delivered to state governments such as Tamil Nadu and Telangana and private players,” Kanade added.
The facility will take 4-6 months for Siemens to start manufacturing the testing kits in India, Kanade explained.
Siemens Healthineers on Tuesday said it is set to make its single largest investment in India of Rs 1,300 crore (EUR 160 million) over the next 5 years, as it sets up a new innovation hub in Bengaluru.
The company also said it has plans to hire an additional 1,800 digital tech experts in the next 10 years.
The innovation hub will come up in a new campus that will combine R&D and manufacturing, and the company said it will become a center of competence for the design and development of entry-level products.
The company said it has already invested about Rs 2,500 crore (EUR 300 million) in R&D in the country.
Siemens Healthineers operates as an independent company since its IPO, but Siemens AG is the largest shareholder, the management said.
Check out our in-depth Market Coverage, Business News & get real-time Stock Market Updates on CNBC-TV18. Also, Watch our channels CNBC-TV18, CNBC Awaaz and CNBC Bajar Live on-the-go!