Every year, there are an estimated 1 billion cases of seasonal influenza, of which 3 to 5 million are severe cases, with 290000 to 650000 influenza-related respiratory deaths worldwide, the World Health Organization (WHO) has said.

Even as the world was beginning to cheer the slowing down of COVID-19, a vaccine expert has warned of an influenza pandemic. In a recent interview, Kathrin Jansen, the former head of vaccine R&D at Pfizer, raised the alarm over a new pandemic due to the spread of an influenza virus. "Before SARS-CoV-2 (the virus causing COVID-19 infection), we had worried about the pandemic flu. And just because corona came first doesn’t mean flu is just sitting there," she said to STAT.

Jansen said that an influenza-based pandemic is just a matter of time. Only "the question is, does it come tomorrow or 50 years from now?" she added.
What is influenza pandemic?
The CDC said that an influenza pandemic happens following a global outbreak of a new influenza virus. There are two types of influenza viruses — A and B. While both are common causes of acute respiratory illnesses, influenza A viruses are the principal cause of large epidemics and pandemics, the WHO said. The influenza A virus was reportedly responsible for four pandemics — 1918 (H1N1), 1957 (H2N2), 1968 (H3N2), and 2009 (H1N1). 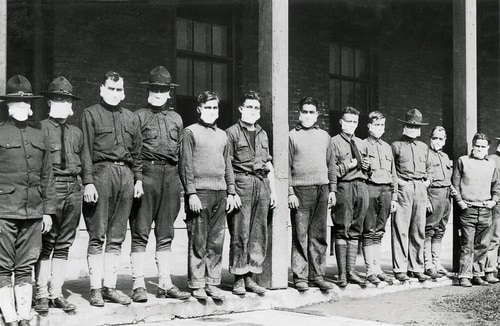 Medical men wore masks to avoid the flu at U.S. Army hospital (Credit: Shutterstock)
ALSO READ | Monkeypox outbreak still a global health emergency — WHO lists reasons for concern
The influenza virus is said to be constantly mutating, and the pandemic occurs when a new virus emerges that can easily infect people and spread among them. Most people might not have immunity against this virus.
"Influenza may not always be thought of by most people as a serious illness — the symptoms of headaches, runny nose, cough and muscle pain can confuse people with a heavy cold. Yet seasonal influenza kills up to 650,000 people yearly," the WHO alerted earlier.
Is the influenza pandemic a matter of concern?
Jansen is not the first to sound an alarm over an influenza pandemic. The World Health Organization (WHO) and some scientists and researchers have spoken about the dangers of it in the past well.
"Another pandemic caused by a new influenza virus is a certainty. But we do not know when it will happen, what virus strain it will be and how severe the disease will be,” said Dr Wenqing Zhang, the manager of WHO’s Global Influenza Programme, quoted by the WHO as saying in an undated article.
Moreover, a study published in Nature in 2021 said, "The influenza virus is a global threat to human health causing unpredictable yet recurring pandemics, the last four emerging over the course of a hundred years".
Also Read: Bill Gates: Hope the world learns from the pandemic and is better prepared next time
How much a flu pandemic costs?
According to the WHO, a flu pandemic is predicted to cost $60 billion every year. However, pandemic preparedness could cost only US$4.5 billion a year. "The cost of pandemic preparedness has been estimated at less than US$ 1 per person per year, which is less than 1% of the cost estimates for responding to a pandemic," the WHO said in 2019.
Therefore, Jansen called for a "better global surveillance of viruses and communication infrastructure so that". This would help scientists learn about these viruses and respond as quickly as possible.
Is it more serious than the seasonal flu?
Even the seasonal flu turns fatal for many every year, so think what mayhem a pandemic can possibly cause.
Talking about numbers, the WHO said that every year, there are an estimated 1 billion cases of seasonal influenza, of which 3 to 5 million are severe cases, with 290 000 to 650 000 influenza-related respiratory deaths worldwide. "Reducing the impact of seasonal flu through better surveillance, prevention, and control helps countries prepare for a pandemic," it said in an article published in 2019.
ALSO READ | Deaths due to India-made cough syrups in Gambia a serious issue, says WHO
Check out our in-depth Market Coverage, Business News & get real-time Stock Market Updates on CNBC-TV18. Also, Watch our channels CNBC-TV18, CNBC Awaaz and CNBC Bajar Live on-the-go!