Updated : July 26, 2020 06:16 PM IST
Inside multiplexes, high-risk touchpoints such as seats, doors, door handles and handrails will be disinfected before the start of each show.
Along with the online paperless ticket booking, patrons will also be encouraged to utilise the digital platforms for placing F&B orders and making payments to reduce direct physical contact.
While there is no formal word from the government to the cinema halls on restarting operations, the multiplexes believe that August will be the right time to reopen.

As we approach the last week of July lockdown, the buzz over unlock 3.0 has increased, thereby increasing the curiosity about what will be allowed to reopen next. After the gradual opening of retail, hospitality and travel industry in the country, the cinema industry is now optimistic that they won’t be left out this time. The Multiplex Association of India (MAI) is certain that cinema halls will be allowed to reopen for the public in the next phase of unlock.

MAI, in the wake of assuring that cinema halls are safe to restart operations, has shared a list of standard operating procedures (SOP) with the concerned central ministries. These SOPs will focus on optimising show timings, entry and exits, and minimise crowding inside the multiplexes.

Deepak Asher, President, Multiplex Association of India stated, “We sincerely hope that the SOPs will help the Government of India in fast-tracking decisions to allow cinemas to restart and provide the much-need relief to the larger Indian film industry.” At the time of booking the seats, at least one seat will be left empty between each group/family who has booked tickets together. (Image Source: MAI)

From algorithmic seating arrangements inside the halls to limitations on gathering in the lobby area during interval breaks, multiplexes will bear a new look to ensure that social distancing is followed at large. Opting the digital way out, cinema halls will now discontinue the paper ticket bookings and F&B orders will also be placed through QR code scans and mobile apps.

Devang Sampat, CEO, Cinepolis India & Director, MAI shared that according to a survey conducted, 82 percent respondents are missing cinema and 75 percent would return to cinemas within 2 months of the lockdown being lifted. “While the COVID is here to stay, we must learn to live with it though without compromising on safety and hygiene. The SOPs drafted by MAI define the ‘new normal’ of safety for cinema lovers. Sentiments among our patrons to visit multiplexes are quite strong. We are hopeful that in unlock 3.0, the government will definitely bring relaxations for the cinema halls,” said Sampat. Along with the online paperless ticket booking, patrons will also be encouraged to utilise the digital platforms for placing F&B orders and making payments to reduce direct physical contact. (Image Source: MAI)

While the cinema halls will opt for regular safety and hygiene measures like temperature screening of patrons, no entry inside without green sign in Arogya Setu app, disinfecting surfaces and seats through deep cleaning, alongside they will also ensure that their patrons maintain high social distancing all throughout via the new SOPs.

Show timings will be designed in a manner that no two shows will start at the same time. Patrons for only one particular show will be allowed to enter and exit the cinema halls in a staggered manner and in a row-by-row order. 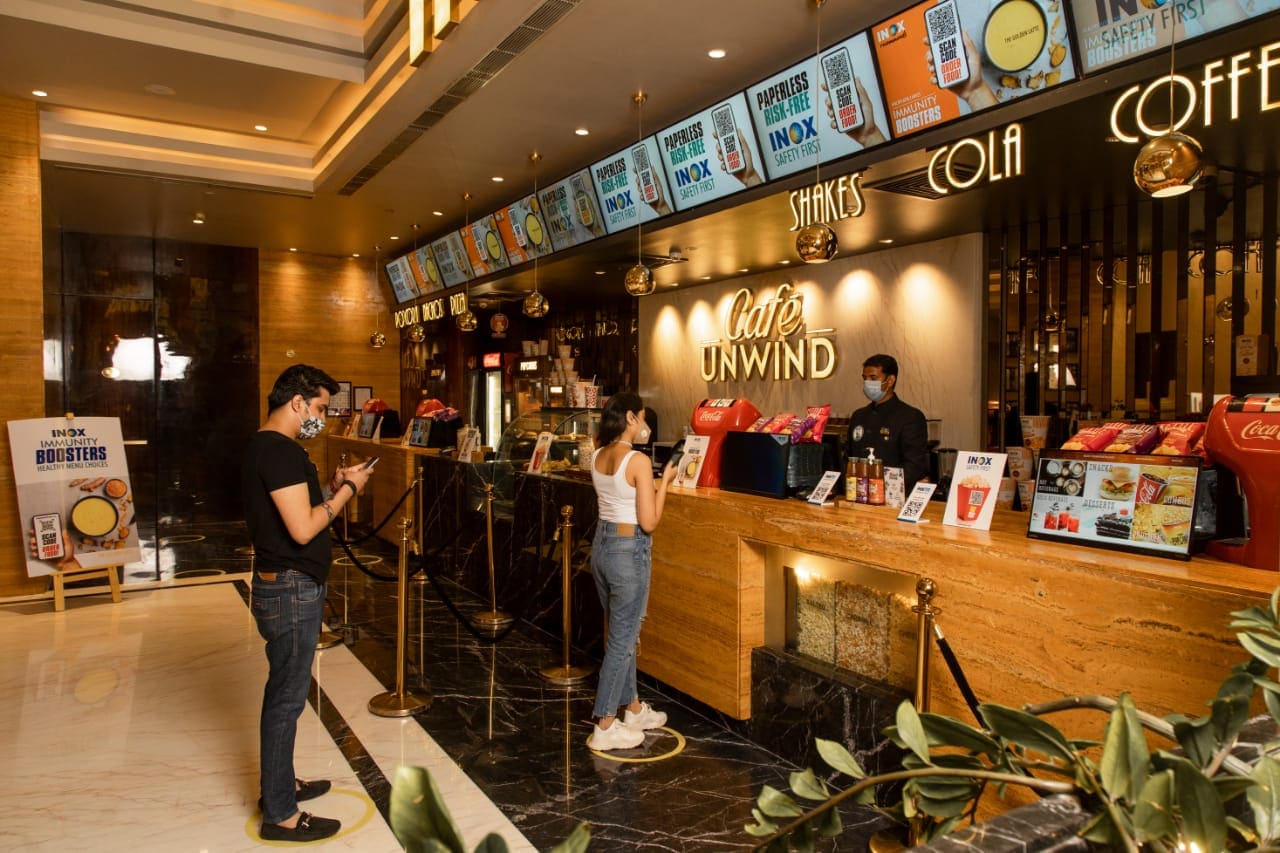 Cinema managers will ensure strict social distancing in the F&B areas. All consumables will be pre-assembled and served. The next customer waiting in the queue will not be called until the one who is being served at the POS has left the counter. (Image Source: MAI)

While there will be only one screen which has an interval at any point of time, a minimum gap of 15 minutes will also be ensured between the two shows in any screen for thorough cleaning and disinfecting the cinema halls. Inside multiplexes, high-risk touchpoints such as seats, doors, door handles and handrails will be disinfected before the start of each show. Also, lobbies and waiting areas will be cleaned and disinfected every two hours. (Image Source: MAI)

Kamal Gianchandani, CEO, PVR Pictures and Director, MAI, said, “60 percent of films revenues in India come from cinemas. The longer we are kept shut, the Indian film industry is bound to suffer more. We have to learn to coexist with COVID. There is a lot of pent-up demand already. Consumer sentiments are strong and I believe the time is right to reopen the cinema halls.”

Echoing the same sentiments, Sampat said that while initial six to twelve weeks will be ramp-up period for the multiplexes, but encouraging consumer sentiments are signs that revenues will streamline gradually. “It is beyond calculations how things span out, so let the patrons decide if they feel safe in visiting cinema halls,” he stated.

While there is no formal word from the government to the cinema halls on restarting operations, the multiplexes believe that August will be the right time to reopen. Quite a few big banner Bollywood films like ‘83’, ‘Sooryavanshi’, are scheduled to release later this year during the festive season, which for multiplexes are certainly expected to bring the demand back, provided they are able to win the confidence of patrons through the established safety and hygiene SOPs.
Tags Bollywood COVID-19 Multiplex Multiplex Association of India unlock 3.0