India reports 9 monkeypox cases, 1 death — List of states where infection has been found

India reports 9 monkeypox cases, 1 death — List of states where infection has been found

The World Health Organization (WHO) declared the monkeypox outbreak a global health emergency last week. Here's a list of Indian states where monkeypox cases have been reported till August 4.

India has reported nine monkeypox cases so far. Recently, the World Health Organization (WHO) declared the monkeypox outbreak a global health emergency. The announcement came after more than 16,000 cases of monkeypox were reported in more than 75 countries and five people died due to the infection in Africa.
Here's a list of Indian states where monkeypox cases have been reported till August 4.
Five monkeypox cases in Kerala:
1. The first case of monkeypox was confirmed in the Kollam district of Kerala. The person had returned from the United Arab Emirates (UAE). All his contacts were identified, and 11 of his co-passengers, his family members, an auto-driver, a taxi driver and a dermatologist of a private hospital where the infected person sought treatment were kept under observation. The patient has recovered from the disease.
2. The second positive case was reported in Kannur. "The 31-year-old man from Kannur is currently undergoing treatment at Pariyaram Medical College. The patient's health condition is reported to be satisfactory. Those in close contact with him have been put under surveillance," said Veena George.
3. The third case was confirmed after a 35-year-old man, who had returned to Malappuram from the UAE, tested positive for the virus.
4. A 22-year-old man, who died in Kerala on July 30, tested positive for monkeypox on August 1, sources told news agency PTI. The man had returned from the United Arab Emirates (UAE), where his samples also tested positive for the disease, sources said. This was also the first death reported due to the disease in the country.
5. On August 2, Kerala Health Minister Veena George was quoted by ANI as saying that a 30-year-old man, who had reached Kozhikode airport on July 27 from the United Arab Emirates (UAE), had tested positive for monkeypox virus. He was undergoing treatment in Malappuram.
Four monkeypox cases in Delhi
1. The country's fourth case of monkeypox was reported in Delhi on Sunday. A 34-year-old man with no travel history was admitted to the Maulana Azad Medical College with fever and skin lesions, the Health Ministry said. His samples were sent to the National Institute of Virology (NIV) Pune on Saturday which came out positive, sources said. "Contact tracing process has been initiated," the sources said. He has now been discharged from the hospital after recovery.
2. A 35-year-old Nigerian, with no recent history of foreign travel, reportedly tested positive for monkeypox. "His samples were sent to the National Institute of Virology (NIV) in Pune. The report which arrived Monday evening showed he was positive," PTI quoted official sources as saying.
3. On August 2, another Nigerian was reported to be infected with the virus.
4. Delhi reported its fourth monkeypox case on August 3. According to reports, a 31-year-old Nigerian woman tested positive for the disease. She is the first woman in India to test positive for monkeypox. She was diagnosed with fever and skin lesions and is admitted to Lok Nayak Jai Prakash (LNJP) Hospital.
About monkeypox

(Credit: Ministry of Health Affairs)
Monkeypox infection is treated with lotions and fever medications and if there is any blood infection or viral pneumonia, adequate medications are administered. The 'Guidelines on Management of Monkeypox Disease' issued by the Centre stated that human-to-human transmission occurs primarily through large respiratory droplets generally requiring prolonged close contact.
It can also be transmitted through direct contact with body fluids or lesions, and indirect contact with lesion material such as through contaminated clothing or linen of an infected person. Animal-to-human transmission may occur by bite or scratch of infected animals or through bush meat preparation. 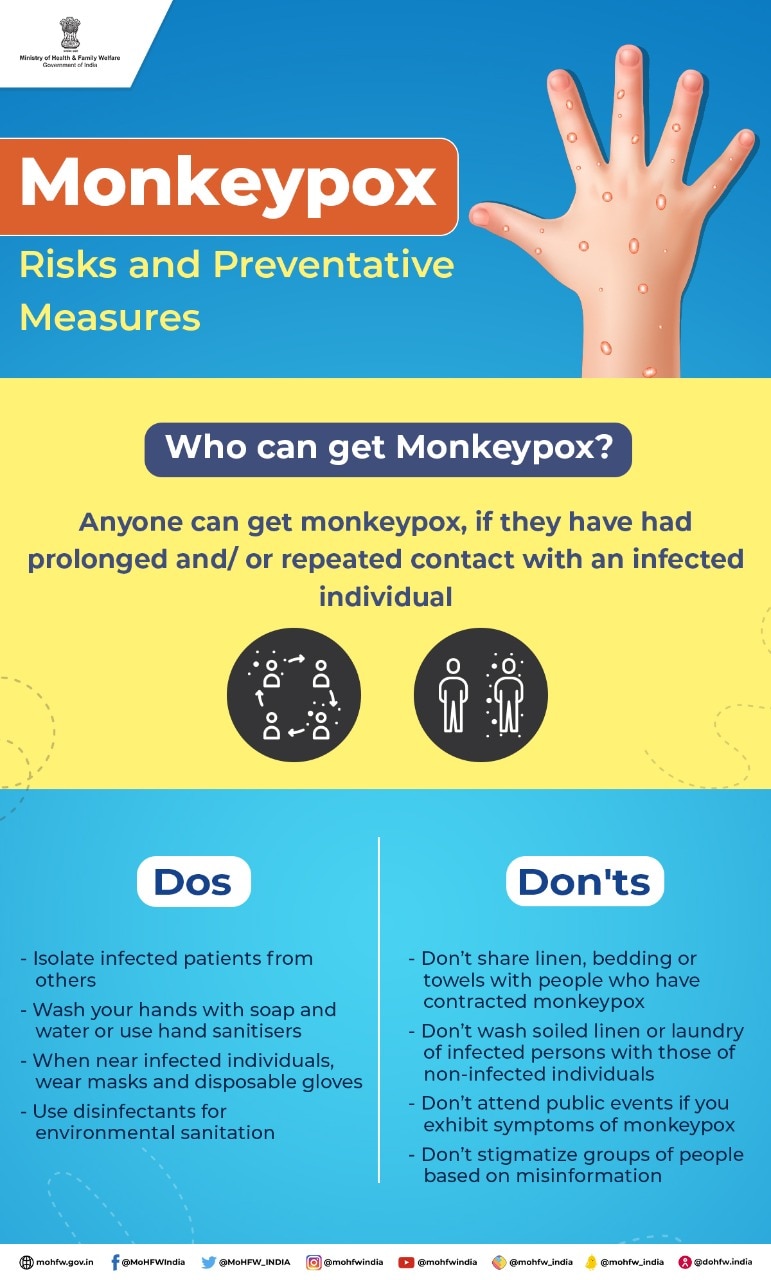