Updated : January 21, 2020 01:04 PM IST
The Aam Aadmi Mohalla Clinics were conceptualised to provide quality primary health care services accessible within the communities in Delhi at their doorstep.
All the medicines at the pharmacy, which occupy a corner of the clinic, are supplied by the government.

At a bustling neighbourhood in South East Delhi’s Shaheen Bagh, located between Jasola and Noida, stands a porta cabin structure measuring roughly 100 square metres. One could easily miss it but for the nearly always throng of visitors for most of the day.

It is a mohalla, or community clinic, which offers primary healthcare facilities, one of the few hundreds that have sprouted in Delhi under the rule of the Aam Aadmi Party. The so-called Aam Aadmi Mohalla Clinics — where consultation, medicines and tests are free — have been billed as one of the big successes of AAP’s reign in Delhi and is expected to play a vital role in the party’s attempt to retain power in the Assembly elections on February 8.

The Arvind Kejriwal government envisioned these clinics to provide primary healthcare in the un-served or under-served localities of Delhi. They were conceptualised to provide quality primary health care services accessible within the communities in Delhi at their doorstep, according to a government website. Mohalla clinic with CM Arvind Kejriwal and health minister Satyendra Jain's faces covered in deference to the model code of conduct ahead of the Delhi Assembly elections. Photo: Wasi Manazir

The mohalla clinics have come as a breath of fresh air in India’s paralytic public health system, long synonymous with a severe shortage of doctors and hospitals and monstrous costs of essential drugs. India is among the world’s lowest spenders on public health, at only about 1 percent of its GDP.  With notable exceptions such as Kerala, few state governments have an exemplary record in public health.

Until recently, the facade of the mohalla clinic at Shaheen Bagh carried the faces of Kejriwal and health minister Satyendra Jain. But in deference to the model code of conduct in place ahead of the elections, their faces have been temporarily covered.

The clinic is a four-person operation helmed by a doctor named Dwarka Das. He has an assistant in his cabin, and another to register the names of patients, and a colleague who oversees the pharmacy.

The clinics operate from Monday to Saturday, opening at 8 am and finishing at 2 pm. What begins as a trickle of patients in the morning turns into a flood around noon. The patients need to show their Aadhaar card for registration and a mobile phone number, if available. What happens in the mohalla clinic?

On a typical day, Dr Das sees 125 to 150 patients but the Shaheen Bagh road blockade has seen the number drop to around 100. While a majority of the patients comprise of the local residents, Dr Das said patients come from as far away as Noida (part of Uttar Pradesh) and Madanpur Khadar, a neighbouring underserved locality that doesn’t have a mohalla clinic.

Coughing and skin diseases were the ubiquitous problems for a vast majority of the patients. Dr Das attributed these illnesses to a lack of hygiene and a propensity to shake hands.

Waiting patients cannot escape a chart that spews information about the millions of bacteria transfer during a handshake, high five, and fist bump; greet with a ‘namaste’ for zero bacteria tansfer.

Virender Singh, 53, a Delhi Police officer who walked in with a skin infection was quickly diagnosed with eczema and prescribed medicines. Singh, who had a considerable girth, then complained of a gastric ailment.

Singh would be prescribed a treatment but not before a lesson from the doctor. “Those in the police should never have a belly,” Dr Das said. If Singh was unconvinced, he threw in the example of police forces in other countries for good measure.

A nutrition table, targeted at patients suffering from issues like diabetes, blood pressure and excess weight to eat right, is kept handy by the doctor's assistant.

The patients were pleased with the facility. Bahar Ali, 38, said he had been visiting the clinic for the past two years. Raj Kumari, 40, had come from Madanpur Khadar for treating a skin ailment. She previously visited for a back issue. Arman Ali, 19, said he has been visiting the clinic since July last year. “Other doctors prescribe a load of medicines and ask for repeated visits which is not the case here,” Ali added.

While free care is an obvious pull, this reporter met several patients who were delighted with Dr Das’ affability and the effectiveness of the medicines he prescribes. Nawab Khan, who runs a coaching centre, said his 70-year-old mother has benefitted greatly from the clinic after having run the rounds of private hospitals without much success. “I want to write the doctor a note of thanks,” he beamed. Syed Zahid Imam, suffering from a skin ailment, said that the “clinic is great initiative as a government is supposed to take care of its people”.

All the medicines at the pharmacy, which occupies a corner of the clinic, are supplied by the government. Blood tests are also conducted free of charge. A representative from an empanelled facility in Hauz Khas collects samples and brings back reports thrice a week. Reports are typically available two days after the sample collection.

Dr Das, who has had stints in eight other countries including Austria and Iran, praised the initiative as “among the best in the world”. However, he also complained of resource crunch. He said that the glucometer, an essential device for diabetes patients, has stopped working but a new one has not been issued despite requests. The prescription pads have been made by the staff with non-essential paper as pads sanctioned by the government are not readily available. 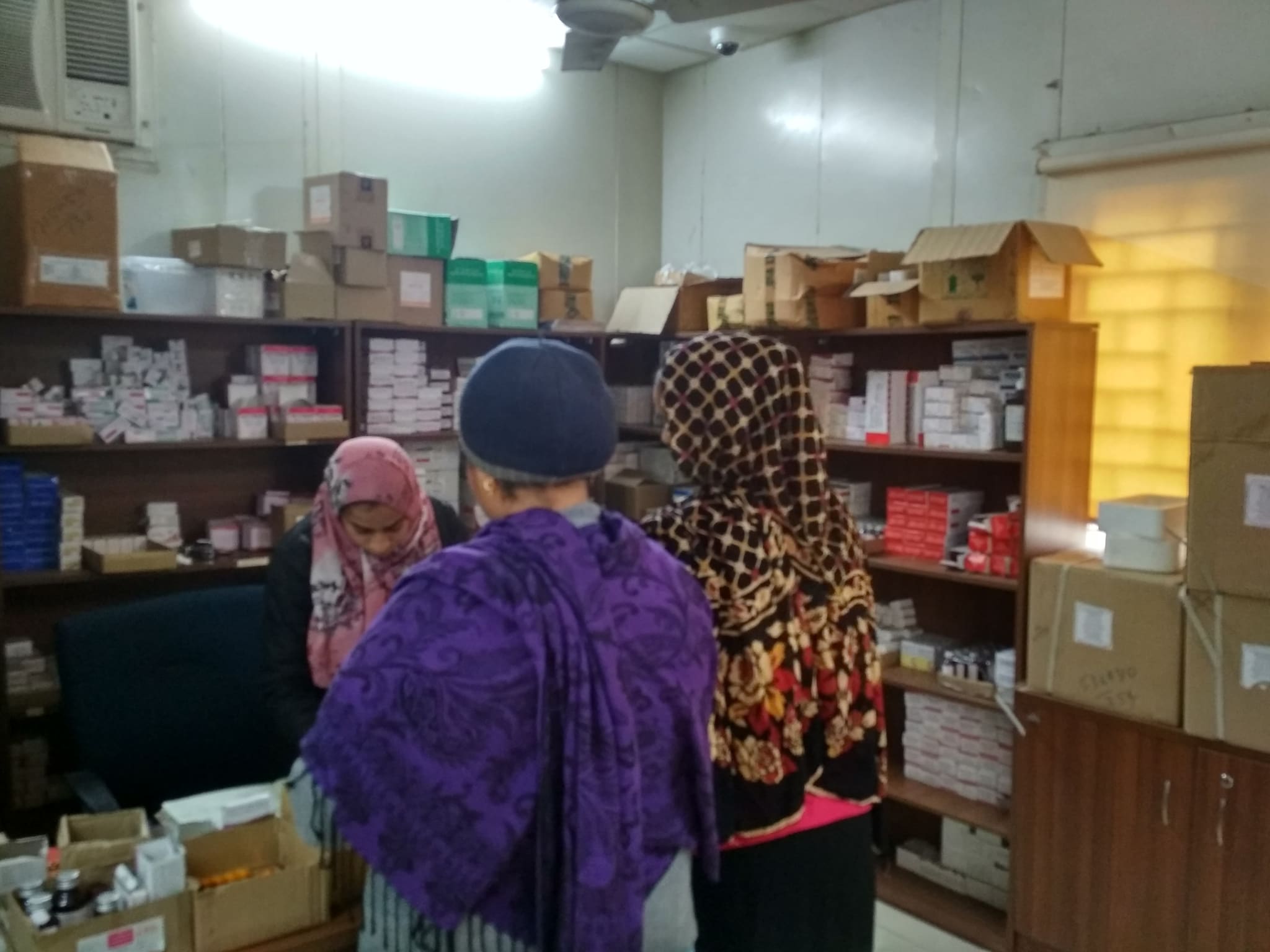 Shaista and Gitanjali, who helm the pharmacy and act as an assistant respectively, are both contract hires. Doing away with contract labour was one of the poll planks for AAP in the lead up to the 2015 elections and will likely be a matter of discussion in this year’s election as well.

Dr Das hired the receptionist Shahana out of his own pocket because he felt it would be difficult to run the facility with just two people. “The clinic would come to a halt if one person takes a day off,” he reasoned. Shaista clarified that MTWs or multi-task workers have been assigned for the clinic but they have not joined due to long commuting time.

AAP aimed to open 1,000 mohalla clinics, one in every 5 km radius, within its five-year tenure. The target is distant.

But as it happens, with the elections in sight, the pace of opening new clinics has picked up with more than 300 in operation now after the opening of a 100 in October last year.