Updated : April 20, 2020 11:28 PM IST
Transgender men and women – one of the most vulnerable and marginalised communities – are facing several issues and with the lockdown being extended, things could get worse for them.

"Rahne ke liye makaan, khane ke liye roti aur pehenne ke liye kapde, this is the basic need of every human being and that’s what we need” – Reshma Prasad, a transwoman.

It’s the fourth week since Prime Minister Narendra Modi announced the nationwide lockdown on March 24 following the coronavirus outbreak in the country. These 26 days have been the longest and most trying times of our lives. Many people have remained under constant fear, in desperation or are angered over not being able to venture out of homes.

Transgender men and women in India – one of the most vulnerable and marginalised communities – are facing more severe issues. With the lockdown being extended until May 3, things could only get worse for this community.

Housing problems In the 2011 Census of India, three codes were added for self-identification -- male, female and other. “This was a huge step towards our acceptance of the third gender,” said Abhina Aher, a transwoman, activist and the co-founder of TWEET.

The Socio Economic and Caste Census, 2011, states that rural India has 75,008 transgender people (majority of which are in Bihar and UP). Overall, the “other” gender population was 487,803. “Mind you, these are just the ones who have already ‘come out’ as transgender. Most don’t, for fear of being ostracised by their family and ridiculed and harassed by society for the rest of their lives. They continue to hide their true self,” Aher added.

Two key strategies in defeating COVID-19 are social distancing and the use of personal protective equipment (PPE). However, most transgender people are poor and live in small clusters, sometimes six to eight share one tiny home.

“You know how expensive it is to rent homes in cities like Mumbai or Delhi. To make matters worse – most landlords don’t want to rent their places to transgender people and if they do, the rent would be much higher than what others have to pay,” Aher explained.

“How can they maintain social distance in such cramped up homes?” she questioned and said, “Most transgender people in India are daily wagers and have mainly three sources of income – they beg, earn from badhai [where transgenders sing, dance and confer blessings on people] and sex work. With the nationwide lockdown, they have no way of earning money to pay rents, for food, utility bills and medicines. Some have already been evicted from their homes by landlords for non-payment of rent.”

Left with limited options, a few of them found shelter with other trans people, but many others have not as yet. Although there are numerous programmes for underprivileged people, most transgender men and women do not benefit from these. “We are called disgusting names and ultimately shooed away from such food centres. Yeh tumlog ke liye nahi hai [this is not the place for you people], is what they are told,” said Reshma Prasad, a transwoman and Secretary of Dostana Safar, an organisation in Patna, Bihar. 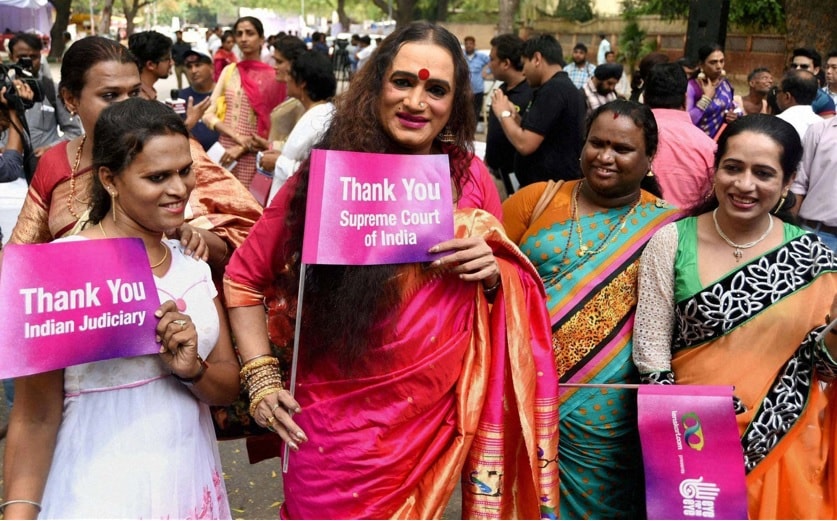 Accessing medicines Due to their involvement in sex work, many transgender people are often subjected to sexual assault and contract HIV. Although anti-retroviral HIV treatment is provided free of cost by the government of India, but accessing the medicines is getting difficult for them due to the lockdown. A number of transgender people have opted for sex reassignment surgery and/or are undergoing hormone therapy, such people need to intake medicines on time, if not they could face severe physical and mental health problems.

“Most transgender people who are undergoing gender reassignment are either out of medicines or on the verge of running out,” said Urmi Jadhav, a transwoman and activist for the community. The National Institute of Social Defence (NSID) did reach out to the transgender community and provided them with a Google document link, both for those with Aadhaar cards and a bank account and those who didn’t have either. However, Jadhav said that there is no follow up from authorities, even after submitting the forms.

Prasad explained, “Most trans people are uneducated as their family disowned them or they quit school due to constant physical and verbal abuse. They run away from homes leaving behind crucial documents including identity proof. Many forms are in English. How are we supposed to fill them? No one helps us. Even if we muster the courage to go to government offices or banks we are constantly judged and ridiculed and in some cases ignored by staff.”

Jayna Kothari, Senior Advocate, Supreme Court and Executive Director at the Centre for Law and Policy Research (CLPR) pointed out that the 2014 NALSA judgment was a landmark decision for the third gender. The judgement directed the central and state governments to take proactive action in securing the rights of transgender people.

Financial difficulties The 2017 United Nations Development Programme (UNDP) in association with the National AIDS Control Organisation (NACO) conducted a study of different social protection schemes for the transgender community by the Indian government and found that numerous issue plagued the community.

Most organisations reached out to the government for help, but simultaneously started pooling resources together. Some individuals contributed funds from personal savings, while employees of these organisations took voluntary pay cuts to help build funds for the community.

These organisations reached out to the community via networking platforms and with the help of individuals and corporate sympathisers started distributing ration, medicines as well as cash to help them. However, Reshma added, “There are thousands who are missing out and getting no welfare, especially in rural areas of Bihar, because they are scared to come out of their homes.”

Addressing mental health issues Many NGOs are helping transgender people cope with mental health problems through digital means. They are using Instagram, YouTube and Facebook to hold regular live chats to address issues such as anxiety, depression among others arising due to improper hormonal balance (due to disruption in hormonal therapy).

The Ministry of Social Justice and Empowerment (MSJE) and NISD are working to empower marginalised communities. Moreover, the Karnataka government on April 8 announced that transgender people receiving pension (Rs 600 per month) would get the amount for two months upfront, while free medicines – as long as they have a valid doctor’s prescription – would also be provided to them. However, not many are believed to have signed up for the assistance. This reason behind this could be the challenges in identifying transgender beneficiaries due to the lockdown. CNBC-TV18.com has reached out to MSJE and NISD and is awaiting a response. “Some community members have told me that when they go to a hospital, some doctors don’t know how to treat them. For example, if a transwoman goes to a female doctor, she is directed to a male doctor or vice versa. No woman would be comfortable if they are kept in a male ward. In extreme cases, some transgender people have been turned away altogether.”

Accepting and empowering transgender people Chhattisgarh is one of the few states with a functioning Transgender Welfare Board, and the state’s Education Board has included lessons about the transgender community as part of the school curriculum.

In 2019, in a big boost to the community, a mass wedding was organised where 15 transwomen were married to men in traditional Hindu rituals.

Veena Sendre is another example of the progressive change in Chhattisgarh. A winner of the second Miss Transqueen India, she represented India at the Miss International Queen 2019.

Moreover, the Chhattisgarh State Tourism Board released an advertisement with Sendre, with the tagline: #ALandFullOfSurprises.
Tags Coronavirus in India transgender community