During the pandemic, 34 percent of all smokers increased their cigarette smoking, primarily owing to stress (77 percent), followed by boredom (67 percent).

Insurance company ICICI Lombard found in a survey that 34 percent of smokers intensified their habit during the pandemic, with 77 percent citing stress as the reason and 67 percent citing boredom.

The survey was conducted from May 17 to May 23, 2022 — ahead of World No Tobacco Day on May 31 — and had 785 responses. It was aimed at finding critical trends across cities with a high smoking population, examining the impact of COVID-related stress on smokers, and deciphering the perceived difference between traditional and e-cigarette smokers.
Youngsters began smoking due to curiosity and influence, whereas millennials report stress as the key motivator. According to the poll, the average age to start smoking is 25 years.The findings reported that sixty percent of all respondents began smoking between the age group of 18 and 25.
Also read:
World No Tobacco Day 2022 focuses on environmental damage caused by smoking The impact of COVID
“Fear of COVID impact getting serious due to smoking helped 29 percent respondents to reduce smoking/ motivated for quitting,” the report stated.
During the pandemic, the proclivity to smoke had a mixed influence. According to the study, 29 percent of respondents reduced or were motivated to quit smoking due to the concern of being adversely damaged by COVID.
“48 percent of smokers reduced their cigarette intake. Among individuals in this category, 60 percent cited the fear of increased risk owing to the pandemic, while 32 percent reduced or quit smoking due to cigarette shortages,” as per the observations in the report. 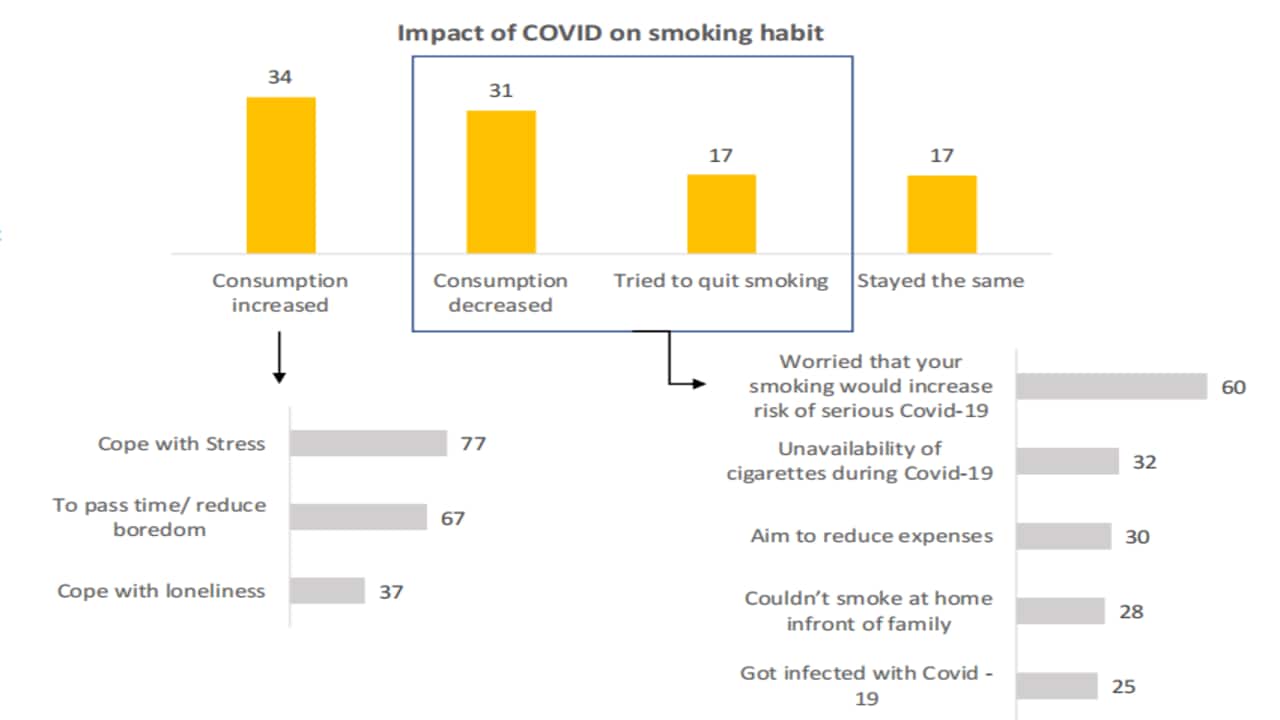 Efforts toward quitting
According to the poll, respondents quit smoking four times per year on average, and 77 percent had tried to quit in the past two years.
It can take up to an average of eight years for a smoker to quit smoking.
In India, 83 percent of those attempting to quit were from the north, 75 percent from the east, 75 percent from the west, and 72 percent from the south.
Furthermore, 86 percent of smokers who smoke once a day have attempted to quit, and 89 percent of respondents identified varied information about the risks of smoking as their incentive to quit.
“61 percent of the respondents mentioned health or appearance as the reason to quit smoking, followed by 43 percent citing the fear of  COVID and 42 percent stated its ill effect on family members as the reason” the report stated.
Also read: No smoking: New Zealand to ban youth from ever buying cigarettes
According to the survey, women (71 percent) appear to be more concerned about the health effects of cigarettes than men (57 percent).