India continues to witness a sharp spike in its COVID-19 cases with around 3.52 lakh new infections reported in the last 24 hours. This is the fifth day in a row when the single-day tally came in at more than 3 lakh. The number of deaths stood at 2,812.

However, there is some good news. Mumbai, which has been one of the worst affected cities, has seen a continuous fall in its single-day cases. Data for the last 20 days hints towards the city's improving COVID-19 situation with 5,542 cases reported in the 24 hours to Sunday, compared with 11,163 infections seen on April 4. 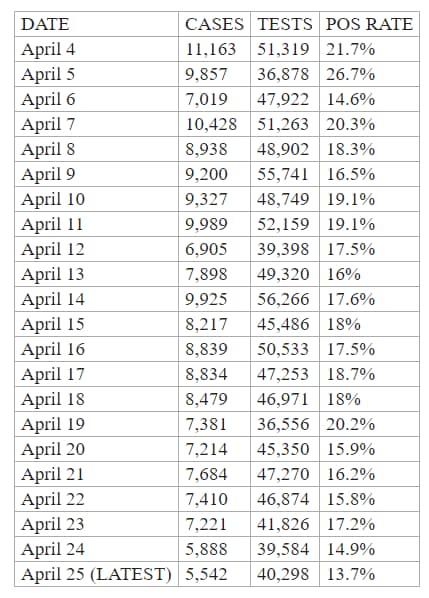 The mortality rate in Mumbai is the lowest in the world, said BMC Commissioner Iqbal Chahal in an interaction with CNBC-TV18 on Monday.

"The second wave in Mumbai started on February 10 and we are almost 76 days into it. In the last 76 days, we got 3.09 lakh new positive cases but I am very happy to state that out of these 3.09 lakh new cases, the number of deaths are only 1,319. That means our mortality rate has been 0.4 percent in this large sample of 3.09 lakh people who became positive and whom we treated. BMC has a great satisfaction that we could save a lot of lives," he said.

The city currently has around 120 containment zones, while the number of sealed buildings is more than 1,200. The Uddhav Thackeray-led Maharashtra government has imposed a night curfew and weekend lockdowns in the city.

The restrictions termed 'Break the Chain' by the government will remain effective till 7 am on May 1.