The third phase of the COVID-19 vaccination drive for 65 lakh people aged above 45 will begin on Thursday. In the first phase, starting January 16, over 3.6 lakh beneficiaries comprising healthcare workers and frontline workers, were vaccinated. In the second phase, shots were given to people aged 60 and above, and those in 45-59 age bracket with comorbidities.

Mamata seen shaking injured leg in video sparks war of words between TMC and BJP
A purported video clip where   Bengal Chief Minister Mamata Banerjee is seen sitting on a wheelchair and moving her plastered leg back and forth has gone viral on social media, giving her rivals an opportunity to claim that she was playing up her injuries to win sympathy. The TMC, however, has condemned the "manner in which the party supremo has been insulted", and said the rival BJP should learn how to respect women.
Share:

A total of 14 workers of two   political parties were arrested for allegedly distributing cash to voters in two areas here on Saturday, police said. Based on information, the police went to an area in Coimbatore south constituency where they caught 12 BJP workers distributing the money to residents.
Share:

Prime Minister Narendra   Modi Saturday slammed West Bengal Chief Minister Mamata Banerjee for branding BJP leaders as "outsiders" (Bohirgato) and said it is an insult to the inclusive ideology of Netaji Subhas Chandra Bose and principles of Indian Constitution. Asserting that Bengal's "Bhumiputra" (son of the soil) will take over as the chief Minister after the BJP is voted to power on May 2, Modi said no Indian is an "outsider" in the state.

People of Varanasi are as kind-hearted as people of Bengal. But you (Mamata Banerjee) will meet so many people with vermillion & 'choti'. 'Jai Shri Ram' slogan irritates you, but you will have to hear 'Har Har Mahadev' every 2 minutes. What will you do then?: PM Narendra Modi pic.twitter.com/ivfslPK7BY

With that it's a wrap to the LIVE updates on the coronavirus pandemic for today. Do join us tomorrow for the top developments on the COVID-19 situation from India and around the world. Until then stay safe and good night.
Share:

Telangana Health Minister reviews rising COVID-19 cases, vaccination
With the state witnessing a   gradual rise in COVID19 cases, Telangana Health Minister EatalaRajender on Thursday asked health department officials to once again work in a warlike mode to contain the spread of the virus and ensure that necessary medicines and equipment are available in all hospitals. Rajender, who held a teleconference with superintendents of tertiarycare and other hospitals, said work should be done in a warlike mode once again (having done so at the peak of COVID19 spread last year).
Share:

Gujarat reports 2,410 new COVID-19 cases, its biggest one-day rise
Gujarat reported its highest   singleday spike of 2,410 COVID19 cases on Thursday, which pushed its overall tally to 3,10,108, the state health department said. The death toll rose to 4,528 as nine patients succumbed to the infection in the last 24 hours.
Share:

Punjab on Thursday reported 3,187 fresh Covid19 cases, the highest singleday spike so far, and 60 more fatalities due to it. On March 26, the state had seen the maximum daily surge of 3,176 infections. As there was no sign of abating in fresh cases of infection, the tally rose to 2,42,895 with 3,187 cases.
Share:

Over 62 lakh people given COVID-19 vaccine in Maharashtra
As many as 62,45,860 people have   been given coronavirus vaccine doses in Maharashtra so far, the state government said on Thursday. Of them, 2,16,211 people were administered vaccines on Wednesday, it said in an official statement.
Share:

Jammu and Kashmir on Thursday recorded 461 fresh COVID19 cases that took its tally to 1,31,421, while four more fatalities pushed the death toll to 1,998, officials said. Of the fresh cases, 361 were reported from the Kashmir division and 100 from the Jammu division, they said.
Share:

Made-in-India COVID-19 vaccines in Yemen a 'game changer': UN official
The shipment of 360,000 MadeinIndia COVID19 vaccines that arrived in Yemen, as part of the first batch of 1.9 million doses it will receive throughout the year, is a "game changer" and a "milestone" in the fight against the pandemic in the country, health officials have said. Yemen on Wednesday received 360,000 COVID19 vaccine doses shipped via the COVAX Facility, a partnership between the Coalition for Epidemic Preparedness Innovations (CEPI), Gavi, the Vaccine Alliance, UNICEF and the World Health Organization (WHO), UNICEF said in a statement.
Share:

Kolkata Knight Riders batsman Nitish Rana was on Thursday cleared to train with his teammates after testing negative for COVID19, more than a week after returning positive for the infectious disease. The 27yearold lefthander had tested positive a day after his arrival in Mumbai on March 21, following which he went into isolation in the team hotel.

Delhi reported 2,790 COVID-19 positive cases and nine deaths in the past 24 hours, according to the health Bulletin released by the state government. The positivity rate stands at 3.57 percent. A total of 1,121 people have been recovered and discharged today.

One COVID-19 patient can infect 400 people, says Maharashtra health official
The head of Maharashtra's COVID-19 task force Dr Sanjay Oak on Thursday said a COVID-19 patient can infect 400 people, and hence, there is no alternative to masks, hygiene and social distancing. Speaking to reporters, Oak said a new range of symptoms such as common cold, mild body ache and fatigue has emerged in COVID19 patients in the state.
Share:

Sources told CNBC-TV18 that subject expert committee (SEC), appointed by India's drug regulator, did not consider recommending emergency use authorisation (EUA) for Sputnik V Vaccine today. According to the sources, SEC asked DR.Reddy's and Sputnik V to submit package insert, fact Sheet, stability data as the vaccine needs to be stored at minus 18 degree. "Dr.Reddy's asked for time before they come back on efficacy data and additional documents." 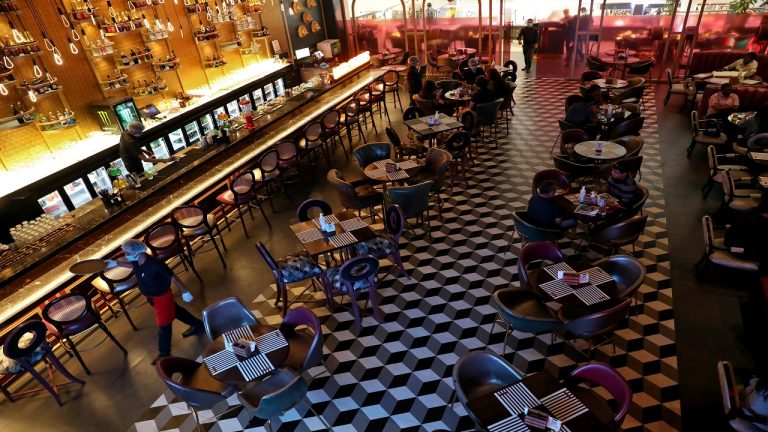 The service sector has been on a recovery path over the past few months, with the IHS Markit PMI data in February showing a sharp expansion versus the previous month. But a fresh wave of rising COVID…

Nagpur reports 3,630 new COVID-19 cases, 60 patients die
Nagpur district in Maharashtra on   Thursday reported 3,630 new coronavirus cases and 60 deaths, authorities said. With this, the district's caseload rose to 2,29,668, while the death toll went up to 5,158, the District Information Office said in a release.
Share:

Mumbai city reported 88,710 coronavirus cases in March this year, nearly 475 per cent more than the previous month's infection count, the Brihanmumbai Municipal Corporation (BMC) data has revealed. The city had reported 18,359 COVID-19 cases in February and 16,328 in January this year. It means that there were 70,351 more cases in Mumbai in March as compared to the previous month and 72,382 more cases as compared to the tally in January. As per the data, the virus claimed 216 lives in the financial capital of the country in March, a rise of around 181 per cent as compared to the death toll of 119 in February. The third phase of vaccination began today in which people above 45 years of age will be given doses.Get latest Healthcare online at cnbctv18.com

Kamal Gianchandani, President of Multiplex Association of India, on Thursday said government should allow businesses to function with uniform SOPs. He demanded that taxes and fees should be waived for businesses for the time they don't function.

Gianchandani said that a lot of restrictions have been taken in a haphazard manner and there is also a lot of misinformation about many restrictions. "Cinemas stated opening up in India by December and halls in South India are doing extremely well but theatres in North and West are still struggling.  Maharashtra is a very important state for the cinema industry."

UP reports 2,600 new COVID-19 cases, 9 fatalities
Uttar Pradesh reported 2,600 new COVID19 cases and nine fatalities on Thursday, pushing the state's infection tally to 6,19,783 and the death toll to 8,820.  The number of active cases in the state has gone up to 11,918, Additional Chief Secretary, Heath, Amit Mohan Prasad said, adding that 6,722 patients are in homeisolation, 287 in private hospitals and the rest in government facilities.
Share: