COVID-19 in Maharashtra: A comparative reading versus other states

COVID-19 in Maharashtra: A comparative reading versus other states Almost 75 percent of new daily deaths and nearly 50 percent of all deaths owing to coronavirus reported in India come from the state of Maharashtra. With the highest COVID 19 burden, Maharashtra has reported 97 deaths and a total of 1,364 confirmed cases till April 9.

Maharashtra government is contemplating to extend lockdown in certain worst affected pockets like Mumbai post the April 14 period. A detailed look at numbers can explain why.

Almost 75 percent of new daily deaths and nearly 50 percent of all deaths owing to coronavirus reported in India come from the state of Maharashtra. With the highest COVID-19 burden, Maharashtra has reported 97 deaths and a total of 1,364 confirmed cases till April 9.
Maharashtra reported 25 new deaths between April 8 and 9, versus the total 33 deaths reported across the country.
The state also has one of the highest mortality rates at 7.11 percent, more than double the national average of 3.10 percent and even higher than the global average of 5.95 percent.

April 10th analysis report by Maharashtra’s Medical Education and Drug Department highlights this. The state of Tamil Nadu and Delhi with the second and third highest numbers of confirmed COVID19 cases have seen mortality rate be much lower at 0.96 percent and 1.67 percent respectively.
Odisha that became the first state to already announce extending lockdown till April 30 has mortality rate of 2.27. Only one COVID19 fatality in over 44 confirmed cases in the state.

Almost 86 percent of COVID19 patients currently admitted in the hospitals in Maharashtra are asymptomatic
, meaning they did not show any symptoms of COVID19 when they were first tested. People infected with COVID-19 may not show signs of the disease for more than 7-8 days in certain cases and hence may get missed out. They can still be potential carriers and spreaders or the virus. However, extensive screening and tracing of contacts of laboratory confirmed cases can help report these cases.

26 patients, 3 percent of all admitted in the hospital are critical as of April 9.
The state is now planning to implement rapid random testing in the highly affected areas of the state to widen screening. The state is planning to procure 1 lakh rapid antibody testing kits from a South Korean company.
Till April 9, Maharashtra tested a total of 30,000 samples and has 4 percent ratio of samples testing positive.
Mumbai
The country’s financial capital Mumbai, followed by Pune has seen the fastest rise in the number of confirmed cases. The densely populated Mumbai has the highest number at 876 confirmed COVID19 cases and accounts for more than half of all deaths reported in the state.
The densely populated region of Mumbai Metropolitan Region accounts for 65 out of 97 total deaths. MMR expands to peripheral towns and districts of Mumbai, Thane, Kalyan-Dombivili, Vasai-Virar, Mira-Bhayander, Panvel-NaviMumbai, portions of Palgarh and Raigarh.
The state government is contemplating extending the lockdown in the MMR region post the April 14th period as the numbers continue to rise in the densely populated clusters in the city and neighboring areas.
While the cases in the state have spread to rural belts of Sangli, Satara, Yavatmal, Ahmednagar, Aurangabad, however the rise in cases has been moderate.
Age Distribution
39 percent of all people infected due to COVID-19 are in the 20 - 40 years age group. More than 48 percent COVID-19 patients are under the age of 40 years, in line with the country’s average.
More younger people, particularly in the 21 – 30 years age group (20 percent), are falling down with the infection in Maharashtra. 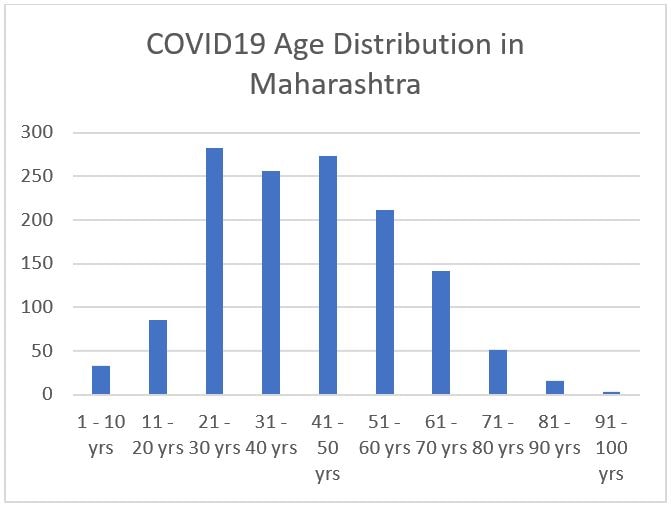