Updated : September 06, 2020 08:30 PM IST
Here are the latest updates and developments from the novel coronavirus outbreak in India today

India’s COVID-19 tally on Sunday saw another record surge of 90,632 cases in the past 24 hours, as infections spread to smaller cities and parts of rural India. According to the Union health ministry, the country’s caseload reached 4,113,811, slightly short of Brazils confirmed 4,123,000 infections. Brazil is the second worst-hit country after the United States with 6,245,112 cases. The ministry on Sunday also reported 1,065 deaths for a total of 70,626. More than 1 million cases have been detected in India in less than two weeks. Health officials say the country’s daily testing exceeds 1 million now.

Here are highlights from the coronavirus outbreak in India from September 6:

After being closed for over five months due to the COVID-19 pandemic, the Delhi Metro is all set to resume services in three stages from Monday, even as it appealed to people to use the rapid transport only if urgently needed.

The Delhi Metro Rail Corporation (DMRC) authorities on Sunday reiterated that stations located in containment zones, as per the status on the day of the journey, will remain closed.

Over 65% jump in containment zones count in Delhi

There has been a rise of 80 per cent in the number of home isolation cases of COVID-19 in the national capital in the last 16 days, and parallely the containment zones count too has spiralled up to 976 over the same period, according to official data. Amid steady rise in fresh and active coronavirus cases in the last several days, the number of people in home isolation here on Saturday reached the five-figure mark again after over a month's time.

The coronavirus positives increased by the new normal 10,000-plus but the number of active cases dropped below the one-lakh mark in Andhra Pradesh

Immense self-discipline and caution were exercised at places of worship in India during the coronavirus pandemic, setting an example for the entire world, Minority Affairs Minister Mukhtar Abbas Naqvi said on Sunday.

He said followers of almost all religions of the world reside in India and various festivals and other auspicious occasions were observed during the coronavirus crisis.

Congress' Rajya Sabha MP from Haryana Deepender Singh Hooda tested positive for COVID-19 on Sunday. The 42-year-old, who is the lone opposition MP from Haryana, is currently in Delhi. He asked people who may have come in his contact during the past few days to isolate themselves and get tested.

With a record 73,642patients having recuperated in a day, India's COVID-19 recoveries have surged to nearly 32 lakh, pushing the recovery rate to 77.32 per cent while the case fatality rate, one of the lowest globally, has further dropped to1.72 per cent as on date, the Union Health Ministry said on Sunday. There are 8,62,320 active cases of coronavirus infection in the country accounting for only 20.96 per cent of the total caseload, it highlighted.

Pakistan's COVID-19 tally reached 298,509 on Sunday after 484 coronavirus cases were recorded across the country, according to the official data. Another two patients died in the last 24 hours, taking the COVID-19 death toll to 6,382, the Ministry of National Health Services said.

A 19-year old woman  COVID-19 patient was allegedly sexually abused by an ambulance driver while shifting her to first line treatment centre near here, police said on Sunday. The ambulance driver Noufal (29) was taken into custody on Sunday based on a complaint by the victim's mother to the hospital authorities and the police.

Rajasthan recorded eight fresh fatalities due to COVID-19 and 726 new cases of the virus on Sunday, according to an official report here. With this, the cumulative number of COVID-19 deaths and cases in the state has climbed to 1,130 and 90,089 respectively. Of the eight deaths, one was reported in Ajmer, one in Alwar, three in Bikaner, one in Dausa and two in Jaipur.

With 2,574 new Covid-19 cases registered during the last 24 hours, Telangana's tally crossed 1.4 lakh on Sunday. The new infections pushed the cumulative numbers to 1,40,969. Nine more people died during the period taking the toll to 886. According to a media release from the office of the Director of Public Health and Family Welfare, the fatality rate in the state was at 0.62 per cent against the national average of 1.7 per cent. Of the fatalities, 53.87 per cent had co-morbidities.

said. The 16 people who succumbed included five women and were in the age group ranging from 54 to 85. Most of the deceased had comorbidities, a release from the Health department said.

Arunachal Pradesh's COVID-19 tally inched closer to the 5,000-mark on Sunday as 139 more people, including 20 security personnel, tested positive for the infection, a senior health official said. The fresh infections have taken the northeastern state's caseload to 4,914, he said.

#COVIDー19 India Updates | India’s total #coronavirus cases have gone past 41 lakh with a record rise of over 90,633 cases. The jump to more than 41 lakh cases comes only 14 days after India reached 30 lakh pic.twitter.com/QMdIn1pbfh 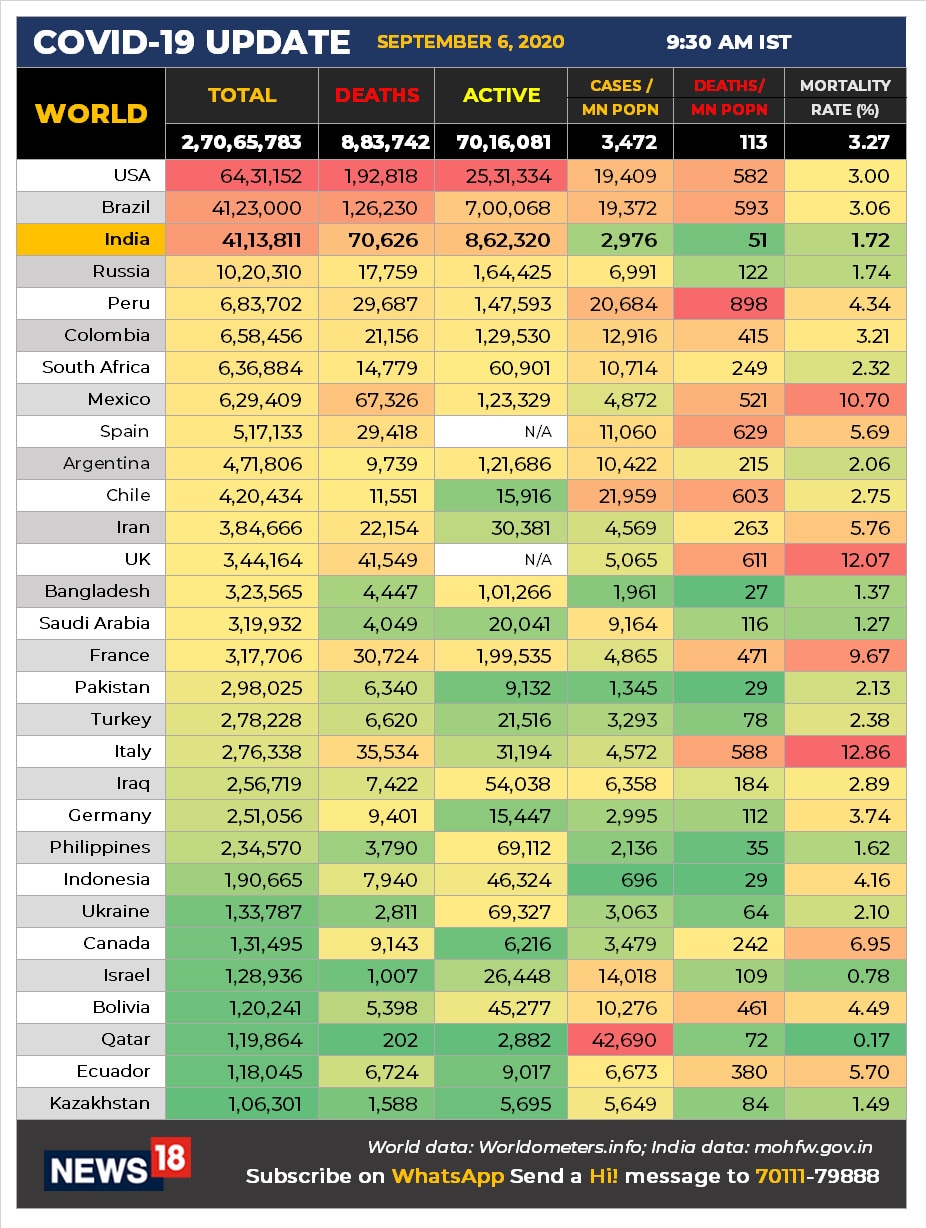