COVID-19 tally added some 16,488 new cases, more than 12,700 discharges and 113 deaths, taking the country total to more than 1.10 crore cases. There are more than 1.59 lakh total active cases in the country, as the vaccination count is steadily rising.

The country has vaccinated over 1.4 crore high-risk people to date, and more than 8 lakh people were vaccinated yesterday.

Stay tuned for the live updates on coronavirus news and inoculation drive from across the world.

Jammu and Kashmir on Saturday recorded 97 new COVID19 cases, taking the infection tally to 1,26,383, officials said No fresh COVID19related death was reported in the past 24 hours, they said. Of the new cases, 24 were from the Jammu division and 73 from the Kashmir division, officials said.

Kerala on Saturday crossed the 10 lakh mark in terms of total COVID19 recoveries, while reporting 3,792 new positive cases and 18 deaths. With the addition of the fresh cases, the infection count surged to 10,56,498 and the death toll to 4,182, state Health Minister K K Shailaja said in a release.

The first phase of COVID19 vaccination programme in South Africa is ahead of schedule, health authorities said on Saturday after the second batch of Johnson and Johnson (J&J) vaccines landed in the country. In the first week of the Sisonke' campaign to vaccinate healthcare workers as a priority, 6,648 patientfacing healthcare workers in the public and private sector were vaccinated, the Department of Health said in a statement.

The NITI Aayog has promulgated a price range of Rs 300-500 for two Covid vaccines that would be available for the priority group at private facilities in the third phase of vaccination set to begin from March 1, sources privy to the development told IANS, adding that the Bharat Biotech's Covaxin would cost a bit higher. However, the union health ministry would take a final call on the proposition. The proposed price has been floated after a five-hour-long meeting held between Dr VK Paul, member (health), NITI Aayog and officials from Serum Institute of India and Bharat Biotech on Friday evening, which was concluded around 11 p.m., sources added.

Mumbai Police has registered a case against three marriage halls for allowing more number of guests than the prescribed limit of 50 on the complaint of the city civic body, an official said on Saturday. At each of these three marriage halls, located on CST Road in Kalina, at least 200 guests had assembled on Friday, the civic official said. He said many guests gathered at these halls were not wearing a face mask and social distancing norms were also not adhered to. "Officials of the BMC's (Brihanmumbai Municipal Corporation's) health department who were on supervision duty on Friday night spotted the violations at the three halls," the official said. Accordingly, action was taken against these halls and an FIR was lodged at Vakola police station against officials concerned with each marriage hall for violating the COVID-19 rules, he added.

New Mexico health officials on Friday confirmed an additional 659 COVID-19 infections, the highest daily case count in more than three weeks. Nearly 30 percent of the new cases involved state inmates. Officials earlier this week expressed optimism about downward trends in the overall spread of the virus, with all of the state's counties reporting positivity rates below 10 percent. However, they acknowledged that the seven-day rolling average of daily cases remained above targets. In all, New Mexico has reported nearly 185,000 cases since the pandemic began. The death toll stands at 3,685, with more than a dozen deaths reported Friday.

The Odisha government on Saturday said week-long home isolation will be mandatory for people coming by plane or train from five high-risk states even as 86 new COVID-19 cases pushed the tally to 3,37,104, a health department official said. Additional Chief Secretary, Health and Family Welfare, PK Mohapatra in a partial modification to the instructions issued on Friday to district authorities and others, has clarified that at present the precautionary measures may be limited to passengers coming from five high-risk states instead of 12 states named earlier.

Increased levels of a protein, which humans have inherited from Neanderthals, are associated with reduced disease severity in COVID-19 patients, according to a study that may lead to the development of new therapeutics against the novel coronavirus infection. The research, published in the journal Nature Medicine on Friday, noted that the protein OAS1 is linked to a less severe disease requiring ventilation and reduced mortality among COVID-19 patients, and may help develop potential therapies to treat those infected with the virus.

The Centre has cleared the decks for the second phase of mass vaccination against the novel coronavirus in India. In this phase beginning March 1, people above the age of 60 will be eligible to receive the shot. Besides the elderly, the Centre said that even 45-year-olds and above with co-morbid conditions can also get the jab. In the first phase, which began on January 16, healthcare, frontline and sanitation workers, as well as defence forces, police and paramilitary personnel, were vaccinated. Know more about registration, price, and documents.

Arunachal Pradesh did not report any new coronavirus infection in over a week, while there are only three active COVID-19 cases in the state at present, an official said on Saturday. In all, over 16,800 COVID-19 cases have been detected in the state so far, State Surveillance Officer Dr Lobsang Jampa said. No new cases were reported in the last eight days, he said. Altogether 16,777 people have recovered and 56 patients died, he said. The state has three active cases at present, Dr Jampa added. The recovery rate is 99.64 percent, while the positivity ratio stands at 0.01 percent, he said. The fatality rate is at 0.33 per cent, the official said. All three active cases are in the Namsai district.

The health department has been carrying out the inoculation drive four days a week -- Mondays, Thursdays, Fridays and Saturdays. 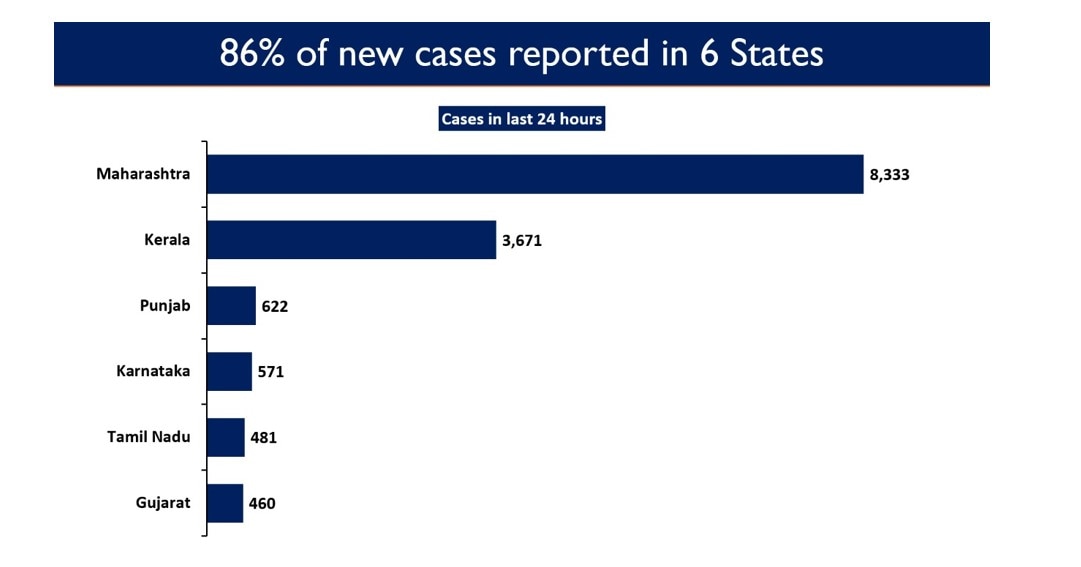 Philippine President Rodrigo Duterte has extended partial coronavirus curbs in the capital until the end of March, as the country awaits the arrival of vaccines, the presidential spokesman said on Saturday. With Southeast Asia's second-highest tally of infections and deaths, the Philippines has suffered lengthy, strict lockdowns in Manila and provinces, hitting an economy that was among Asia's fastest-growing before the pandemic. Curbs will stay for another month in Manila, which accounts for 40 percent of national economic output, the spokesman, Harry Roque, said in a statement.

Talks between Government and COVID-19 vaccine manufacturers to set the vaccine price at Rs 250 remain inconclusive as manufacturers hesitate to supply to private hospitals at such a low price. Sources told CNBC-TV18 that the government has proposed to cap the price per dose of vaccine at Rs 250, including Rs 150 for vaccine and Rs 100 for user feed and administration charges. However, "vaccine manufacturers express their reservation to supply to private hospitals at Rs 150," people aware of the matter said. Click here for more information.

The active case count has further increased to 1,59,590, which comprises1.44 per cent of the total infections, the data stated. The number of recoveries reached 1,07,63,451, which translates to a national COVID-19 recovery rate of 97.14 percent and the case fatality rate stands at 1.42 percent.

For the first time, a coronavirus-linked death has been reported in Lakshadweep. The Health Ministry stressed that more than 70 per cent of the deaths were caused due to comorbidities. "Our figures are being reconciled with the Indian Council of Medical Research (ICMR)," the ministry said on its website, adding state-wise distribution of figures is subject to further verification and reconciliation.