Coronavirus news highlights: India’s total COVID-19 cases have risen by more than 2 lakh for a second day running with a record reading of 2.17 lakh. 1,185 deaths have been reported which is the biggest single-day increase in the last seven months. There is a silver lining – the increase in active cases is lower versus the last two days, but it still remains around the 1 lakh mark. Also, recoveries have picked up and an increase of more than a lakh has been reported for the first time.

With that it's a wrap to the LIVE updates on the coronavirus pandemic for today. Do join us tomorrow for the top developments on the COVID-19 situation from India and around the world. Until then, stay safe and good night.

Delhi recorded its highest-ever one-day COVID-19 figures Friday when 19,486 cases and 141 deaths were reported, prompting Chief Minister Arvind Kejriwal to order setting up more coronavirus facilities and increase the strength of oxygen beds. Lt Governor Anil Baijal also directed Chief Secretary Vijay Dev to set up helplines for information on availability of hospital beds, besides establishing help desks at every COVID-dedicated health facility to assist patients and their attendants. Kejriwal appointed his deputy Manish Sisodia the nodal minister' for overall COVID-19 management in the city and assigned him the responsibility of inter-ministerial coordination. With the unprecedented rise in coronavirus cases, the AAP government also appointed 10 IAS officers as "nodal officers" for COVID-19 hospitals run by it and asked them to work from the health care facility they have been assigned.

Mumbai on Friday reported 8,839 new COVID-19 cases, taking the tally to 5,61,998, while 53 more patients succumbed to the infection, the city civic body said. According to the Brihanmumbai Municipal Corporation's (BMC) updated data, the new cases took the overall COVID-19 tally in the financial capital to 5,61,998, while the toll rose to 12,242. As compared to a day before, the city reported nearly 600 more COVID-19 cases and four more fatalities. Mumbai had recorded 8,217 new infections and 49 fatalities on Thursday. Mumbai's highest one-day case count so far is 11,163, reported on April 4. Also, 9,033 patients were discharged from hospitals during the day, taking the number of recovered cases to 4,63,344, the civic body said. The BMC said with 50,533 more COVID-19 tests conducted in the last 24 hours, the number of samples examined so far increased to 48,51,752.

A doctor and three hospital ward boys have been arrested for allegedly stealing remdesivir injections from dead COVID-19 patients in order to sell them in the black market, Nagpur Deputy Commissioner of Police V Neelotpal said on Friday. The four work in different hospitals and 15 vials of the injection, in high demand amid a spike in coronavirus cases, have been seized from them, he said. "When a patient used to die, they would enter the room in PPE kits, steal Remdesivir injections lying unused around and then sell each vial for as much as Rs 5,000. A ward boy was also supplying them these injections for Rs 3,500 and the accused were selling it for Rs 16,000. They have been doing this for the past 10 days, we have found out. Another doctor and ward boy are also on the radar in this case," he said. The four were remanded in police custody till April 28, the DCP informed, and identified the accused as Dr Lokesh Shahu, and ward boys Shubham Mohdure, Kunal Kohale and Sumit Bangde.

1,189 samples have tested positive for variants of concern of SARS COV-2 in India: Health ministry The Maharashtra government is trying its best to tackle the severe spike in COVID-19 cases but it was not possible for anyone to give an absolute assurance that no patient would die, state Deputy Chief Minister Ajit Pawar aaid on Friday. Talking to reporters after chairing a review meeting on the COVID-19 situation here, he said the issue of beds, oxygen, Remdesivir injections, a key medicine in the treatment of the infection, were discussed. "We are trying our best to serve the people. No government or leader would think of losing any of its citizens. However, no one assure error free support," the deputy CM said when asked whether his government could promise that no one would fall prey to shortage of beds or medicines. He said not every patient required Remdesivir but private hospitals were asking relatives of patients to get vials of this medicine, which is not correct.

Europe's drug regulator on Friday said it would hold a press briefing on its review of very rare blood clotting disorders associated with the use of Johnson & Johnson's COVID-19 vaccine on Tuesday, April 20, at 1500 GMT. The European Medicines Agency (EMA) had previously announced it would provide an update on its review of the cases, which have occurred in the United States, next week. It has so far maintained that the benefits of the shot outweighed the risk of any side effects.

Telugu film star and Jana Sena Party chief K Pawan Kalyan has tested positive for coronavirus but is now stable, his political secretary P Hariprasad said on Friday. "Kalyan is being monitored closely by his personal doctor as well as a team of experts from Apollo Hospitals. There is some flum in his lungs and he is suffering from small bouts of fever. But he is stable," Hariprasad said in a statement. Kalyan remained in self-isolation at his farm house outside Hyderabad after returning from the by-election campaign in Tirupati on April 3. Initial test turned out a negative result for Covid- 19 but he continued to suffer from slight fever and body pain. "A second test revealed the Covid-19 infection," Hariprasad said.

India remains badly placed to tackle COVID spread: Fitch Solutions
Despite several healthcare reforms, India remains badly placed to tackle the third wave of COVID19 infections sweeping the nation, Fitch Solutions on Friday said, adding the unprecedented crisis has highlighted the need to increase investment in the healthcare sector.  After some success in curbing the virus considerably, India's economy had returned to functioning normally by the second half of 2020.
Share:

India remains badly placed to tackle COVID spread: Fitch Solutions
Despite several healthcare reforms, India remains badly placed to tackle the third wave of COVID19 infections sweeping the nation, Fitch Solutions on Friday said, adding the unprecedented crisis has highlighted the need to increase investment in the healthcare sector.  After some success in curbing the virus considerably, India's economy had returned to functioning normally by the second half of 2020.
Share:

Be more conservative, considerate in filing applications when judges, staff down with COVID: HC
A Delhi High Court judge on Friday said lawyers "need to be a bit more conservative" while filing applications in the prevailing situation where several judges and staff of the high court are down with COVID19.  Justice Prathiba M Singh said filing of applications for urgent hearing when there was no urgency in a matter was not fair to the judges or the registry staff.
Share:

ITBP activates medical setup, special COVID care centre for serving and retired personnel
All hospitals of the IndoTibetan Border Police (ITBP) have been "activated" and a COVID care centre has been operationalised in Delhi for serving and retired personnel of the force in view of the spurt in coronavirus infections across the country, the paramilitary said on Friday.  ITBP director general S S Deswal issued a message in this regard to around 90,000 personnel and an estimated 20,000 retired and dependents of the force that was raised in 1962 after the Chinese aggression.
Share:

Harmanpreet Kaur recovers from COVID-19
Indian women's T20 captain Harmanpreet Kaur on Friday announced that she has recovered from COVID19.  Harmanpret had tested positive and made it public on March 30. After more than two weeks, her RTPCR report has come negative.
Share:

An Italian prosecutor has accused the World Health Organization (WHO) of hindering efforts to investigate allegations that Italy failed to prepare adequately for the coronavirus pandemic. Prosecutors in the northern city of Bergamo, the epicentre of the deadly outbreak of COVID-19 in 2020, are also looking into accusations that WHO officials helped the Italian health ministry cover up its alleged shortcomings.

Union health minister Dr Harsh Vardhan today reviewed preparedness of AIIMS, New Delhi in light of recent surge of COVID-19 cases in the capital. “We defeated the virus when we did not know much about it and we can do it again.” "Think about developing new models that can be implemented and replicated in other parts of the country," Vardhan told the Medical community. “COVID Appropriate behaviour: the biggest social tool we have to break the transmission chain.”

Dr Jagadish Hiremath of Ace Multi-Specialty Hospital today said authorities were behaving like an ostrich, and did not prepare for the COVID-19 second wave. "We saw people attending political rallies. Put an end to kumbh melas. Supply chain needs to be corrected for remdesivir and oxygen. Vaccination is the key," he added.

He had held an emergency meeting over COVID, at his residence earlier today. pic.twitter.com/i5fPumgIIl 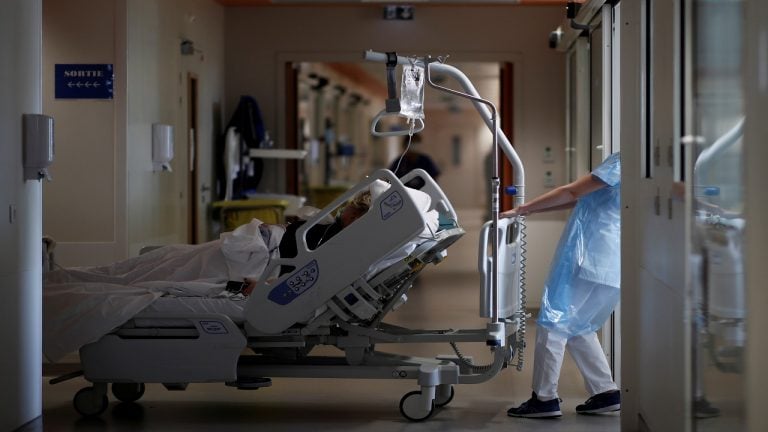 In an interview to CNBC-TV18, Dr BS Ajaikumar, chairman & CEO of HealthCare Global Enterprises and Dr Vikram Shah, CMD of Shalby spoke at length about the stress in healthcare infrastructure.Get…

As many as 1,243 persons tested positive for coronavirus and 14 died of the infection in Maharashtra's Raigad district, an official said on Friday. With the latest cases reported on Thursday, the tally of infections in the district has reached 86,467, of which 75,433 patients have recovered from the disease, the official said.

Of the latest cases, Panvel taluka alone recorded 727 infections, followed by Alibaug taluka with 147, Khalapur with 60 and Karjat with 45, he said. Among the 14 fatalities reported on Thursday, five were from the Panvel Municipal Corporation limits, three from Sudhagad, two from Karjat and one each from Pen, Murud, Tala and Mahad talukas, the official said.

IndiGo airline transported a total of 81,437 kg of COVID-19 vaccines between January 12 and April 12, the budget carrier said in a statement on Friday. It noted that the airline had a leading market share of 36.56 per cent in COVID-19 vaccine transportation during this period. "IndiGo operated these flights by adhering to all the requisite precautionary measures," the statement said. The Directorate General of Civil Aviation had in early January issued guidelines for airlines for transportation of COVID-19 vaccine packed in dry ice. Ronojoy Dutta, chief executive officer of IndiGo, said, "We are pleased to be the leader in COVID vaccine transportation in the country by moving the highest share of these vaccines, at 36.5% in the last three months, from key COVID vaccine manufacturing points - Pune, Hyderabad & Mumbai."

People will likely need a third booster dose of a COVID-19 vaccine within 12 months of being fully vaccinated, Pfizer CEO Albert Bourla said on Thursday. The pharma giant is one the major manufacturers of the coronavirus vaccine. In a televised interview with CNBC, Bourla also said that annual revaccination against COVID-19 could be a possibility. “A likely scenario is that there will be likely a need for a third dose, somewhere between six and 12 months and then from there, there will be an annual revaccination, but all of that needs to be confirmed. And again, the variants will play a key role,” Bourla.

Centre focusing on vaccination and testing, has no lockdown plans

#CNBCTV18Exclusive | Centre continues to focus on testing and vaccination. Govt sources say it’s up to states to decide on curfew and curbs, Centre has no lockdown plans, reports @AnshuSharma02 pic.twitter.com/WyfBtKB93p

Weekend curfew to be imposed in Chandigarh from Friday 10 pm to Monday 5 am. Only essential services will be allowed. The order will come into effect from tonight. The decision was taken in a high-level meeting of Chandigarh Administration.

UP reports over 27k new cases and 103 deaths on Friday

Amid rising COVID-19 cases, the Haj Committee of India (HCI) has said that no Indian Muslim shall be allowed to go for the annual Haj pilgrimage unless they have been administered two vaccine doses.