Coronavirus in Mumbai: As Dharavi cases show, social distancing is a distant dream for slumdwellers

India’s strategy of enforcing ‘social distancing’ through lockdown measures to fight novel coronavirus is facing its biggest test in Mumbai’s Dharavi. Five people have tested positive in Asia’s largest slum including a doctor running a clinic in the area, raising questions over the use of social distancing to contain the spread of the deadly virus amid an ongoing 21-day lockdown.

Social distancing requires establishing physical distance between people to be successful. But maintaining an adequate space between people is a luxury that India’s slums and chawls cannot afford. Take for instance Dharavi’s case, where about 10 lakh people live within an area of 535 acres.

Maharashtra is the worst-hit state in the country with the total cases standing at more than 850 on Monday, followed by Tamil Nadu and Kerala. Maharashtra has also reported the maximum 52 deaths, as of Monday.

Within Maharashtra, Mumbai has reported more than 400 cases as of Monday and over 30 deaths linked to the virus. With over 2 crore population, India’s financial capital is also identified as among top virus hotspots in the country by the government.

Dharavi, however, is not just alone facing dangers from the community transmission of coronavirus and there are other equally vulnerable localities in the metropolitan area. In fact, nearly 42 percent of Greater Mumbai’s population lives in slums, according to an estimate by World Population Review, which estimates world population based on UN data.

“The houses are very small here and in such small places, how do we maintain the distance? People say being in the house is the easiest thing to do but they say that because they have that kind of space and comfort which we don’t,” said 40-year-old Chanda Chaurasia, a resident of JJ Upadhyay chawl, in suburban Mumbai’s Jogeshwari.

On an average, houses in these slums are of 150 square feet, which residents claim is the reason behind many being spotted outside despite there being strict guidelines. 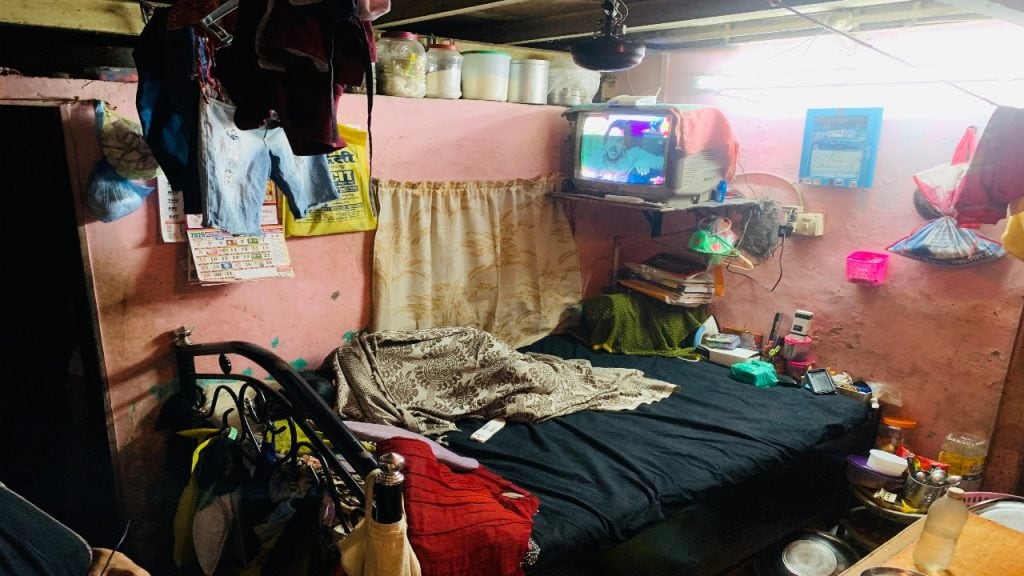 A big challenge in these slums is that a high majority of the dwellers depend on community toilets thereby further raising the risk of community transmission of the virus.

“We all have common toilets and drinking water too comes from a common tap and so there is no way we cannot come in contact with people,” Chaurasia adds. 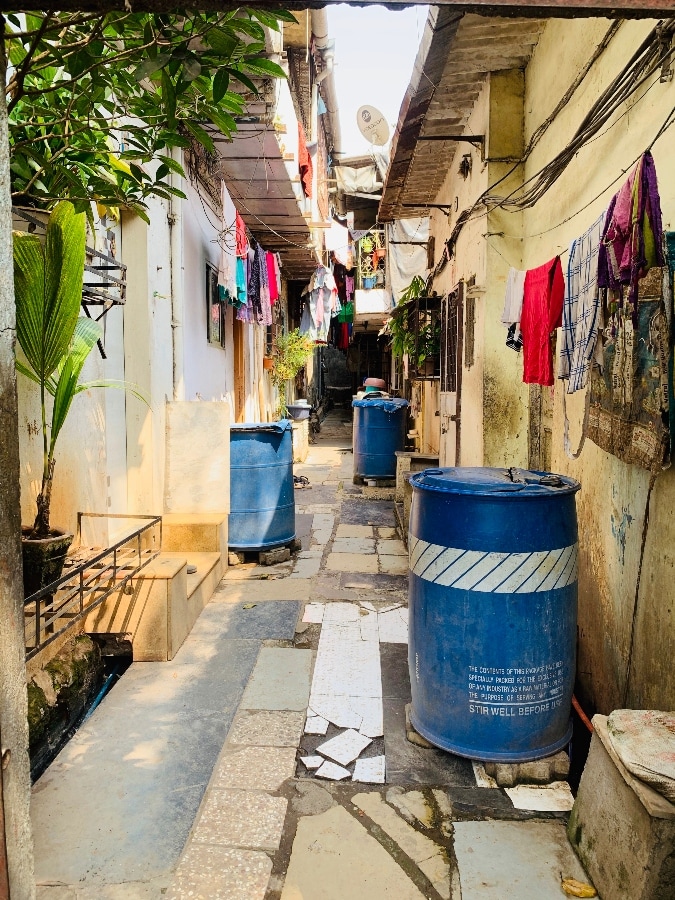 Chaurasia’s is a joint-family with 9-10 members putting up together in one house at times.

“There are joint families and elders, due to their age, fall sick frequently, which includes coughing too. How can you keep your kids away from them?” she asks.

Chaurasia’s mother Shail Chaurasia was recently kept in isolation at one of Mumbai’s private hospitals after she developed breathing difficulties due to severe coughing. She tested negative for the virus.

Her son, 38-year-old Santosh Chaurasia, explains the rationale for stepping out despite the ongoing lockdown. He said that on normal days, they don’t feel the space constraint much as the kids are in school and the adults are at work during the day time; however, when everyone is at home, they feel suffocated and hence choose to step out for some time. People on the road outside their chawls. (Image source: Niral Sharma, CNBC-TV18)

Yet another challenge in these localities is to make people understand the gravity of the situation. Most people lack seriousness or remain ignorant about the threat coronavirus poses to their lives.

“While we are wearing masks, cleaning hands with sanitizers, there are many who remain ignorant,” said Ravi Mishra, a 17-year-old science student, residing in the same chawl.

The 21-year-old Suraj Kumar (name changed), a resident of Gama Singh chawl in Jogeshwari, said that he chooses to step out of the house as “it is boring to sit whole day inside” and that “it was fun and entertaining to come out and watch cops”. 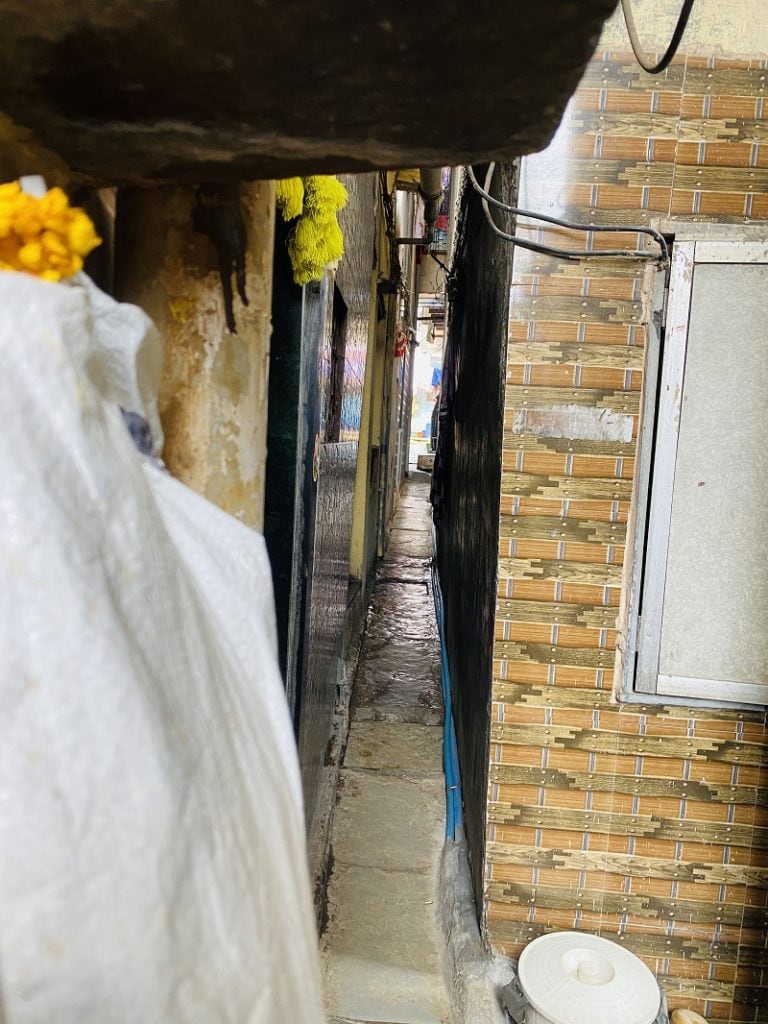 The Ministry of Health and Family Welfare had warned that if the community does not work with the government and does not follow the guidelines, the "community transmission phase" of coronavirus will start. “Only 2-3 people out of 10 would bother wearing masks here. While we all should take responsibility of our health, not everyone thinks the same. Some are taking it very lightly,” said 30-year-old Lokesh Bhoir, who is a resident of Surajmal Gosai chawl.

“Whether you are educated or not, clearly, the risk is higher in chawls than apartments or independent house,” he added.
Tags coronavirus dharavi Dharavi Slum