Climate emergency: Alternate fuel is also easier on the pocket

Updated : November 07, 2019 06:44 AM IST
CNG is environment-friendly as it reduces vehicular exhaust emissions
Saving in running cost when one uses CNG over petrol is Rs 3.29/km

Many scientists have asked that “climate change” be now called “climate emergency”. More than 11,000 scientists issued a warning on Tuesday of "untold suffering" due to global warming and some even said Paris carbon-cutting pledges are "too little, too late". In India, the national capital region (NCR) has been battling smothering conditions for over a week. In this scenario, using cleaner fuels seems to be a logical alternative and the good news is that it is not only better for your health but also easier on your pocket.

Compressed natural gas is a viable alternative to traditional fuels. Being low in pollutants, high in calorific value and heat yield, economical and available in abundance globally, CNG is a preferred fuel. At current levels, CNG is also at an attractive discount of 30-50 percent over substitute liquid fuels.

Additionally, CNG is environment-friendly as it reduces vehicular exhaust emissions significantly. Carbon monoxide emissions are reduced to a maximum of 90 percent and hydrocarbon emissions by 60 percent in comparison to petrol. Carbon dioxide emissions, a cause for global warming, are also reduced by 10 percent.

Taking an example of Delhi and Mumbai, and the assumption that India is primarily a small car driving the market, the mileage that a petrol car gives is 12 km/lt and diesel mileage is higher at 15 km/lt. This compares with a CNG car that has the highest mileage at 17 km/lt. This, of course, is with a caveat that the mileage does depend on different car models and nuances like the city (metro or tier I).

So how does one really save 30-50 percent in costs if they use CNG? It’s illustrated below. The saving in running costs if you use CNG over petrol is Rs 3.29/km and if it’s over diesel, it is Rs 3.4/km. 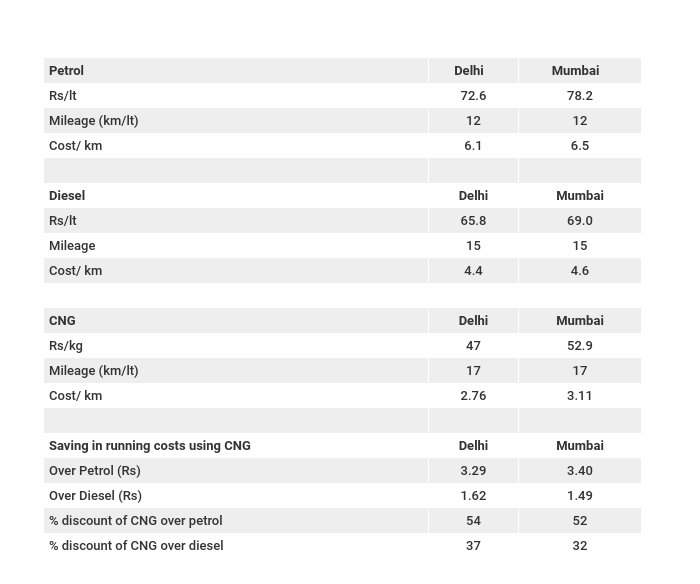 And if you already have a petrol/ diesel car and want to convert to a CNG car, this is what the payback period will look like considering that on an average, you will be paying Rs 40,000 as a conversion cost.

There are some downsides as well. CNG takes up boot space, infrastructure is not well developed and provides a lesser range than other fuels. However, considering the pollution levels and the fact that electric vehicle infrastructure will take some time to develop, this looks like a good option.
Tags air pollution alternate fuel climate change climate emergency CNG Delhi NCR Diesel fuel emissions Petrol PM levels Pollution