Updated : September 30, 2019 01:24 PM IST
It all boils down to how well a bank can define its spread over the repo to keep its average spread healthy over the term of the loan.
If that’s done right, rather than being a bane, the move could actually turn out to be a boon.

There’s been much hullabaloo about how linking lending rates to external benchmarks will pose a challenge for banks when liabilities aren’t similarly pegged. There have also been views expressed on how this can impact the margins of banks. Rationally, when you have one moving and one static number there is bound to be volatility due to expansion and compression of spreads between the two. However, what’s also true is that banks have not in the past been keeping their lending rates static. And that’s what must be factored in.

We did a simple tabulation of repo rate changes and MCLR shifts for India’s largest bank, State Bank of India (SBI), and this is what we found. While the repo rate since April 2016 has moved in a band from 6.5 percent to 5.4 percent (a 90 bps difference), the bank’s 3-year MCLR, too, has oscillated between 9.3 percent and 8.35 percent (a 95 bps band). The spread of the MCLR over the repo for SBI has ranged from 2.15 percent to 2.95 percent with the simple average spread being 2.57 percent. Now, given this, it all boils down to how well a bank can define its spread over the repo to keep its average spread healthy over the term of the loan. If that’s done right, rather than being a bane, the move could actually turn out to be a boon — spreads won’t shrink to as low as 2.15 percent.

This apart, banks also have other levers to manage their costs. For instance, the credit cost for a customer is loaded on this disclosed rate. In today’s environment, given the stress levels across segments, one would expect lenders to factor in higher credit risk on fresh loans. And like the downward cycle in interest rates need not continue through the period of the loan, the credit risks too would change. However, the credit spread will not get adjusted lower. What’s also not quite clear is whether banks will periodically adjust (perhaps annually) the spread over the repo rate on new loans.

Then there’s the matter of the processing fee for loans. While at times banks offer discounts or waivers on this, it is up to them to do so or not go forward, and this offers another lever.

Also, a lot of the short-term volatility in repo rates will likely get smoothened out over the tenure of the loan without any impact on the bank’s cash flows — as EMIs will unlikely be revised monthly on large-ticket home loans, where the practice is to adjust the tenure.

Even in the case of shorter-term products like car loans, the actual impact of rate changes on EMI is nominal — less than Rs 250 per month on an over Rs 10,000 EMI (Rs 5 lakh loan) for a 5-year tenure — which from a borrower’s perspective shouldn’t upset home finances.

Given this, one would expect the large private sector banks to comfortably navigate in the new regime, despite the expressed apprehensions. In the case of public sector banks, though, some pressure to transmit earlier rate cuts could dent their spreads. Important to note here also is that the rates set for loans linked to benchmarks from October 1 will not allow for any further delayed transmission of earlier rate cuts, as rates from then on will move in line with the benchmark. And that allows for keeping some cushion in the bag.

In a recent interview to CNBC-TV18, Aditya Puri of HDFC Bank said that he will be a Shylock to protect the interests of his depositors. While he meant this in relation to ensuring borrowers repaid their dues — for the bank to repay its depositors. One would assume the same philosophy would extend to maintaining the bank’s spreads to ensure a healthy return to depositors on their money.

And, if he will do this, others will too. 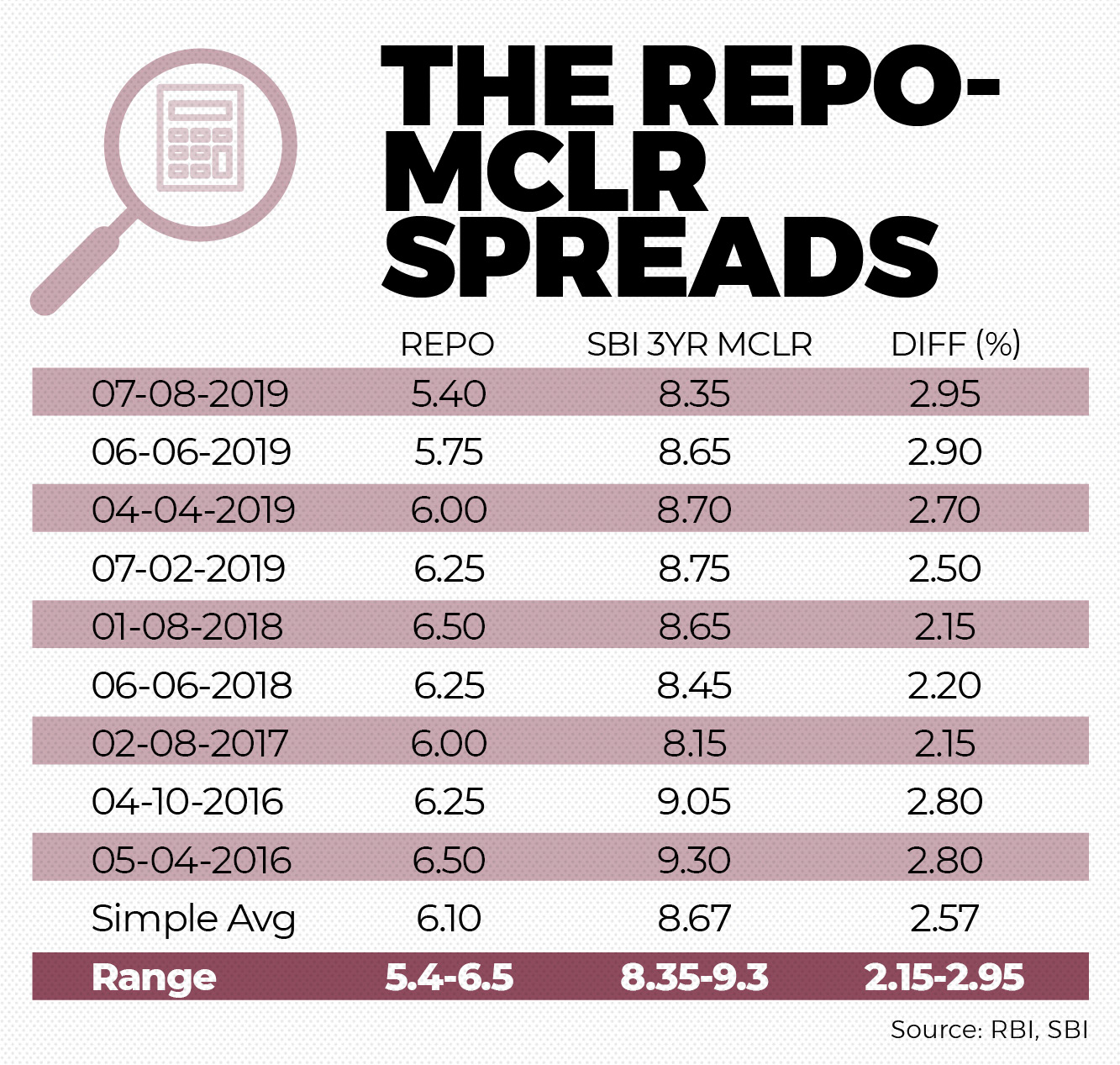