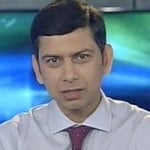 Finance Minister Nirmala Sitharaman today presented her maiden budget aimed at boosting infrastructure and foreign investment in the country.  It is the first budget since Prime Minister Narendra Modi returned for a second term in power.

In an interview with CNBC-TV18, a group of financial experts have shared their views on the budget. They include Member of BSE Ramesh Damani, Group CEO of Ambit Ashok Wadhwa, Director of Enam Holdings Manish Chokhani, Chief India Economist at JPMorgan Sajjid Chinoy, former chairman of SBI Arundhati Bhattacharya, CEO of Dhruva Advisors Dinesh Kanabar and former deputy governor of RBI Rakesh Mohan.

According to Chokhani, the tax structure existing in the country is a bit bizarre. "The central government taxes are basically 12 percent of gross domestic product (GDP) of which 3 percent comes from income tax, 4 percent from corporate taxes and only 5 percent net from indirect taxes. It seems really bizarre to me in a country where goods and service tax (GST) rates are at an average of about 16 percent. Net collection from GST is barely 5 percent of GDP and we keep on trying to raise resources from the 0.7 percent people who are allegedly super rich in the country. It is a bit bizarre. We all have to bear it -- we are all taxpayers but it is clearly not a move in the right direction," he said.

Commenting on the income tax levels, Wadhwa said:"The increase of 3 percent in absolute terms, from 35 percent to 38 percent, is above Rs 2 crore and up to Rs 5 crore. Above Rs 5 crore, the tax is now 42 percent. Forty-two percent effectively is 20 percent increase from the previous 35 percent and obviously 38 percent is 10 percent increase from the previous 35 percent. Now that is a significant hike. One can rationalise and say that the government has to generate revenue from somewhere in a period where corporate earnings are relatively benign. But at least new tax regimes are not being introduced which could have been even more cumbersome."

Raising of personal income tax rate would be a negative, believes Damani. "There are about 1.5 lakh taxpayers in India who are earning more than Rs 1 crore. So the amount of earning more than Rs 3 crore would diminish quite sharply after that. It is a tax against a very small minority. The other thing that surprised me was the public shareholding, the proposal to make it 65 percent, which will be very negative for the multinational companies," he noted.

Talking about PSU recapitalisation package of Rs 70,000 crore, Chinoy said: "It is a good start, I presume this will be done through bonds. What we don't want is this lending to be indiscriminate, as there will be non-performing assets 4-5 years down the line. There is a lot of concerted effort on foreign capital inflows which I think is positive."

In Rakesh Mohan's opinion, doing external sovereign borrowing in external currency is a dangerous move given the fiscal pressures in India. "We have been able to live with this for a long time with financial stability because we have not been doing external sovereign borrowing. It is correct that we have a very low proportion of external sovereign debt, but I am quite apprehensive about this move. It is in response to the low financial savings available in the country which has been the case for the last few years. So, as I said this is a move that will have to be looked at more carefully," he observed.

Kanabar has pointed out an interesting change on the Gujarat International Finance Tec-City (GIFT). "In the NBFC space, on interest on NPAs, there was a regime gap between banks. When NPAs happened banks could account interest only on receipt basis, that was not applicable to NBFCs, but now that has been done. Moreover, an interesting change is on the GIFT city. I deal with a number of foreign institutions who would like to be in GIFT city and who thus far were not comfortable because it was not on par with what foreign offshore regimes were. Now what I heard is, you have zero tax for a period of 10 years, you have no capital gains tax. If you borrow money and you pay interest out of GIFT city and no withholding taxes, so it makes a regime very benign and I am very sure that a lot of people will relocate to GIFT city," he said.
Tags Arundhati Bhattacharya Ashok Wadhwa budget 2019 Dinesh Kanabar Manish Chokhani Rakesh Mohan ramesh damani Sajjid Chinoy
Published : July 05, 2019 03:24 PM IST