24 suitors line up for DHFL so far

Updated : February 18, 2020 09:26 AM IST
As per a senior executive involved in the process, KKR India Financial Services Limited, conglomerates Welspun Group, and Adani Group are among the suitors who have placed expressions of interest (EOIs).
Global alternative investment management firm Oaktree Capital, ARCIL Asset Reconstruction Company and Bain are the other players that have expressed interest to acquire the firm.
Private equity players Warbug Pincus, Varde Partners as well as Deutsche Bank have also placed EOIs.

At least twenty four suitors have already submitted an Expression of Interest (EOI) to acquire troubled mortgage lender Dewan Housing Finance Limited (DHFL) under the Insolvency & Bankruptcy Code, hours before the deadline for submission for EOIs is to end at midnight on February 17, multiple sources confirmed to CNBC-TV18.

As per a senior executive involved in the process, KKR India Financial Services Limited, conglomerates Welspun Group, and Adani Group are among the suitors who have placed EOIs under Option I to take over the entire business. Global alternative investment management firm Oaktree Capital, ARCIL Asset Reconstruction Company and Bain Capital are the other players that have submitted an Expression of Interest under the same Option I to acquire the entire company, sad a person familiar with the development.

The Committee of Creditors for Dewan Housing Finance Limited had invited Expressions of Interest (EOI) from suitors for submission of resolution plans for the troubled mortgage lender under the Insolvency & Bankruptcy Code earlier. The last date to submit EOIs had been set for February 17. 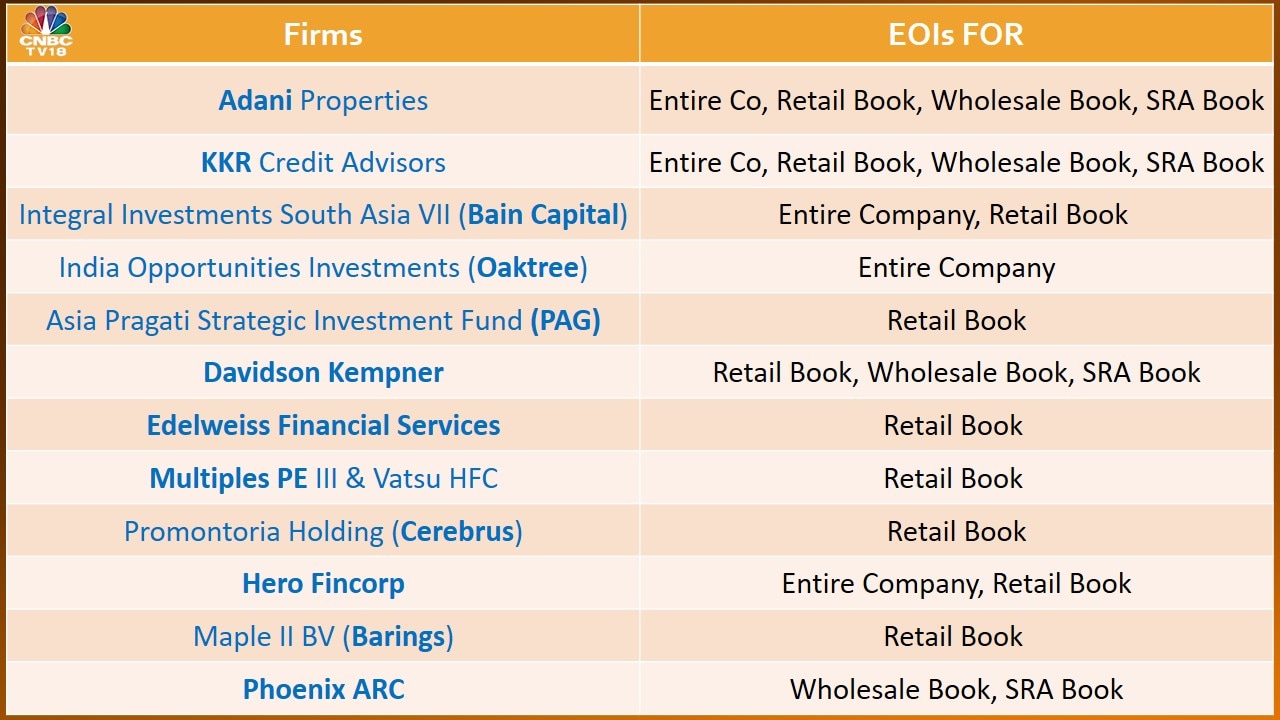 Under Option I, suitors are invited to submit EOIs for the entire business of DHFL as a going concern.

Under Option II, prospective resolution applicants are invited to submit EOIs for one or more Groups or a combination of any assets in isolation across different Groups of DHFL. For this purpose, the Administrator and Committee of Creditors of DHFL have categorised the business of DHFL into three Groups. Group A comprises of DHFL’s retail assets, investments, unsecured loans, fixed assets, etc, Group B comprises of construction finance loans, mortgage loans, corporate loans, and inter-corporate deposits, pass-through certificates (“PTCs”)/Security Receipts (“SRs”), and Group C comprises of loans to projects relating to Slum Rehabilitation Authority, Mumbai, Government of Maharashtra. Banking executives involved in the deal who spoke to CNBC-TV18 said that as many as 16 suitors are expected to place EOIs for DHFL by the end of the deadline tonight.

CNBC-TV18 first reported on DHFL lenders looking to split the company into three parts, and invite separate bids for each business on January 17.

Financial creditors alone have made claims of over Rs 86,892 crore against the company under IBC, of which Rs 80,979 crore of claims have already been admitted.

DHFL is the first financial services company to be admitted into NCLT under the Insolvency and Bankruptcy Code for resolution under the newly introduced Section 227 of the IBC. The board of DHFL was superseded by Reserve Bank of India earlier in November owing to governance concerns and defaults in repayments by the company and sent to the NCLT thereafter. R Subramaniakumar, the former MD & CEO of Indian Overseas Bank, has been appointed as the administrator for DHFL by RBI, and he is being advised by a 3-member panel including Rajiv Lall, non-executive chairman, IDFC First Bank, NS Kannan, managing director and CEO at ICICI Prudential Life Insurance, and NS Venkatesh, chief executive of the Association of Mutual Funds in India.