The Big Babu Churn: Garg’s exit from Finance Ministry came as a bolt from the blue

Updated : July 25, 2019 04:32 PM IST
New Economic Affairs Secretary Atanu Chakraborty’s primary task will be to prop up market sentiment which has taken a beating since Budget 2019.
Garg is understood to have made a case for having a part of India’s borrowings in foreign currency, a move criticised by many economists.

Power corridors of Delhi are always set abuzz by bureaucratic reshuffles as babus, journalists and policy wonks go over the DOPT office memos detailing the new postings and share gossip about why someone gained or lost a plum posting.

But in Wednesday evening’s churn of top officials, where 24 new postings were approved by the Appointments Committee headed by Prime Minister Narendra Modi, one name stood out - Subhash Chandra Garg - who was the top official in the Department of Economic Affairs. Garg, being the senior most amongst his five peers in the Finance Ministry, had the designation of finance secretary.

In fact, this is the second time that a finance secretary was removed by the Modi Government. The first instance was that of Arvind Mayaram, who was sent packing to Tourism Ministry as secretary in October, 2014 and then within a fortnight was transferred to the Ministry of Minority Affairs. 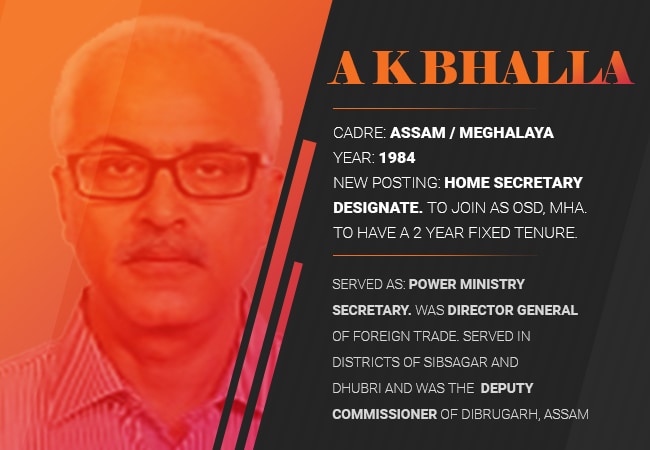 While Mayaram’s unceremonious shift was attributed by many to his closeness to the UPA regime, Garg’s appointment as power secretary came as a bolt from the blue to the observers of North Block.

That is because Garg was seen as a close confidant of team Modi - having prepared three budgets in close coordination with the PMO. As the finance secretary, he steered the first Budget of the Modi government’s second tenure, which was presented less than a month ago.

In the run up to the budget, Garg was seen taking a call on some of the most pressing economic policy matters. As a member of the Bimal Jalan panel on transfer of RBI excess capital to central coffers through the Economic Capital Framework (ECF), he had submitted a dissent note, calling for a one-time transfer of the central bank funds. It was Garg, who had initiated the discussions on ECF and it was during his tenure that RBI started paying an interim dividend to the central government.

Moreover, as the head of the Department of Economic Affairs, Garg is understood to have made a case for having a part of India’s borrowings in foreign currency - a proposal that found mention in Finance Minister Nirmala Sitharaman’s maiden budget speech on July 5. This proposal threw the cat among the pigeons as many top-notch economists raised red flags.

Last but not the least, several economic pundits who advise the government were critical of the way core economic policies were being formulated. Last week, PMEAC member Rathin Roy told Sapna Das of CNBC-TV18 that “India was staring at a silent fiscal crisis”. Roy, who is part of a team of economists advising the PM, made these comments even as the Budget 2019 estimated India’s fiscal deficit - difference between expenditure and revenue - at 3.3 percent of the GDP, which was 10 basis points lower than predicted.

Garg’s tenure also saw demand in most sectors of the economy plummet. While passenger and commercial vehicle sales saw a near-two-decade low sales in the months comprising the first quarter of the 2019-20 financial year, FMCG sales recorded the second worst quarter ever in the April-June period. Indian stock markets lost Rs 10.3 lakh crore in valuation since the presentation of the budget.

At the time of writing of this copy, it is learnt that Garg may have sought voluntary retirement from service after his transfer to the power ministry.

If he continues in service, Garg will have his share of firefighting to do in Power Ministry. Firstly, he will have to ensure that states make timely payment to power generating companies, without which the Load Dispatch Centre - the central government operated monitor - will snap power supply to defaulting states. Moreover, Garg will also have to prod state capitals to adhere to UDAY targets on lower financial and technical losses.

New Economic Affairs Secretary Atanu Chakraborty’s primary task will be to prop up market sentiment which has taken a beating since Budget 2019. Thanks to his tenure as Secretary of Department of Investment and Public Asset management since May 2018 and his earlier stint in the Department of Expenditure between January 2002 to March 2007, Chakraborty is well familiar with the twists and turns of North Block corridors. His colleagues from Gujarat remember him as the suave, sophisticated ‘bhadralook’ (gentleman), who was a maverick in financial matters. Chakraborty's expertise will surely come in handy as he deals with some of the most challenging fiscal policy issues seen in recent times. First up will be navigating the NBFC crisis and the liquidity crunch arising out of it. Secondly, managing the fiscal roadmap as a precursor to the 15th Finance Commission report that is due in November. Thirdly, dealing with the Bimal Jalan panel recommendations that are due shortly and implementing them in the backdrop of the dissent note that his predecessor, Garg, had raised.

It will also be interesting to see how Chakraborty deals with the proposal on sovereign bonds, which according to Garg may be part of the second half of the government borrowing calendar. And while he juggles all of the above, Chakraborty will also have to get ready for Budget 2020. Last but not the least, the new DEA secretary will have to maintain and nurture lines of communication with the central bank as well as market regulator SEBI; remember that the budget proposes to raise shareholding limits from 25 percent to 35 percent.

Another Gujarat Cadre officer who has been made in-charge of a critical economic Ministry is Guruprasad Mohapatra, who returns to Udyog Bhawan as Secretary Department of Promotion of Industry and Internal Trade (DPIIT). In his earlier tenure, Mohapatra handled issues like Special Economic Zones in Department of Commerce. As the head of DPIIT, Mohapatra will have to hit the ground running on issues like E-Commerce - on which a policy has been under formulation. In addition, he will also have to give shape to India’s third Industrial Policy, which has been on the drawing board for the past couple of years. if that is not enough, the Gujarat cadre officer will also have to lead the reforms on FDI norms - which found mention as an important to-do item in the budget speech.

The officer who got the most prized portfolio is power secretary AK Bhalla -- who belongs to the Assam Cadre. He will be joining Home Ministry as an OSD and in end August, take over as India’s Home Secretary from Rajiv Gauba. Amongst other internal security issues, Home Minister Amit Shah will seek to use Bhalla’s experience in the North East to deal with pressing matters like law and order situation arising out of implementation of National Register of Citizens as well as finding a permanent solution to the Naga Insurgency problem.