SBI Chairman says deposit rates will rise but with a lag

SBI Chairman says deposit rates will rise but with a lag Shares of SBI fell nearly 3 percent on Monday after the bank reported a weak set of earnings for the first quarter of financial year 2023 with the profit declining against an expectation of a growth.

State Bank of India (SBI) Chairman Dinesh Kumar Khara on Monday said that India's largest lender would benefit from improving margin due to a lag in deposit rate hike even as lending rates see a quicker transmission with an increase in the policy rate by RBI.

"All said and done, in the rising interest rate scenario, there is always a lag effect when it comes to the deposits and to that extent, the banks will certainly be benefiting from the situation," Khara said during an interview with CNBC-TV18.
Shares of SBI fell nearly 3 percent on Monday after the bank reported a weak set of earnings for the first quarter of the financial year 2023, with the profit declining against an expectation of double-digit growth.
The stock was trading 2.41 percent lower at Rs 518 per share on BSE at the time of writing. It has gained 6 percent in the last month while it is up 12.47 percent this year so far. SBI has gained 18.87 percent in the last year, outperforming Sensex by about 11 percent.
SBI’s profit at Rs 6,068 crore, down 6.7 percent year-on-year (YoY), missed the Street estimates by a massive margin as analysts had expected a rise in the number by 16-18 percent. A CNBC-TV18 poll had estimated the profit at Rs 7,688.2 crore. The decline in the net profit was due to a massive drop of 80 percent in non-interest income to Rs 2,312 crore from Rs 11,802 crore, owing to losses of Rs 6,549 crore in investments as a result of a spike in bond yields.
"We now seem fully insulated from rising bond yields," Khara said in a virtual press meet.
Net interest income, though down as compared to the poll estimate, jumped 13 percent from last year with improved credit offtake and asset quality.
Net interest margin — a measure of the profitability of banks — grew 8 basis points on a year-on-year basis to 3.23 percent but was down 17 basis points sequentially. NIMs, however, are expected to go up. “I do not really envisage any challenge from the loan book in terms of quality, which actually gives me confidence that perhaps we should have much better NIMs," said Khara.
For the first time, deposits saw a sequential decline in 22 quarters to Rs 40.45 lakh crore but were up 8.7 percent compared to last year. Advances stood at Rs 28.15 lakh crore, up 15.8 percent YoY and 3 percent QoQ, with domestic advances surging 14 percent and foreign office advances jumping 22.4 percent.
Slippages, however, saw a sharp increase sequentially. Gross non-performing assets fell by 141 basis points YoY to 3.91 percent but were down marginally QoQ. Provisions declined 15 percent to Rs 4,268 as asset quality improved.
The loan book grew 14.9 percent with healthy corporate and retail books. While corporate loans rose 10.57 percent from last year, the retail book saw a jump of 18.58 percent.
"In the retail book, we continue to see decent trends, the way we have grown in this quarter, about 18 percent, we expect almost similar kind of a trend to continue going forward," the chairman added.
Most brokerages remain positive on the stock, increasing their target price. 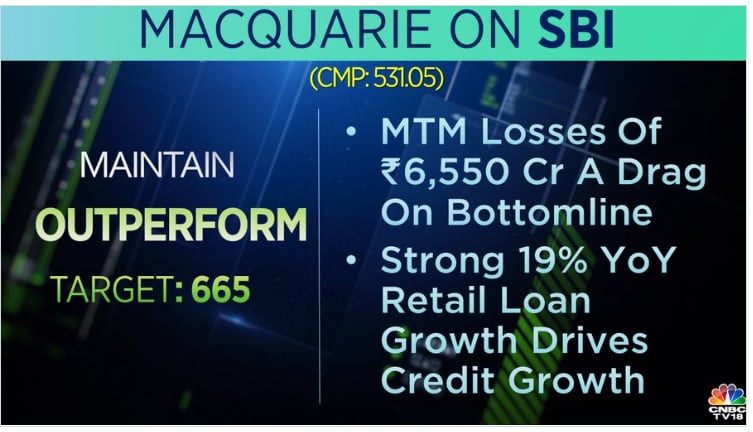