The government and the RBI have been fighting for weeks over how much autonomy the RBI should have as the administration of Prime Minister Narendra Modi seeks to reduce curbs on lending and to gain access to the RBI’s surplus reserves.

Reserve Bank of India (RBI) governor Urjit Patel on Monday resigned from his post on account of personal reasons, with immediate effect.
"On account of personal reasons, I have decided to step down from my current position effective immediately," Patel said in a statement.
The 54-year old Indian economist had served as the deputy governor for three years before his appointment as the governor on September 4, 2016.
"It has been my privilege and honour to serve in the Reserve Bank of India in various capacities over the years. The support and hard work of RBI staff, officers and management has been the proximate driver of the Bank’s considerable accomplishments in recent years. I take this opportunity to express gratitude to my colleagues and Directors of the RBI Central Board, and wish them all the best for the future, " he added. 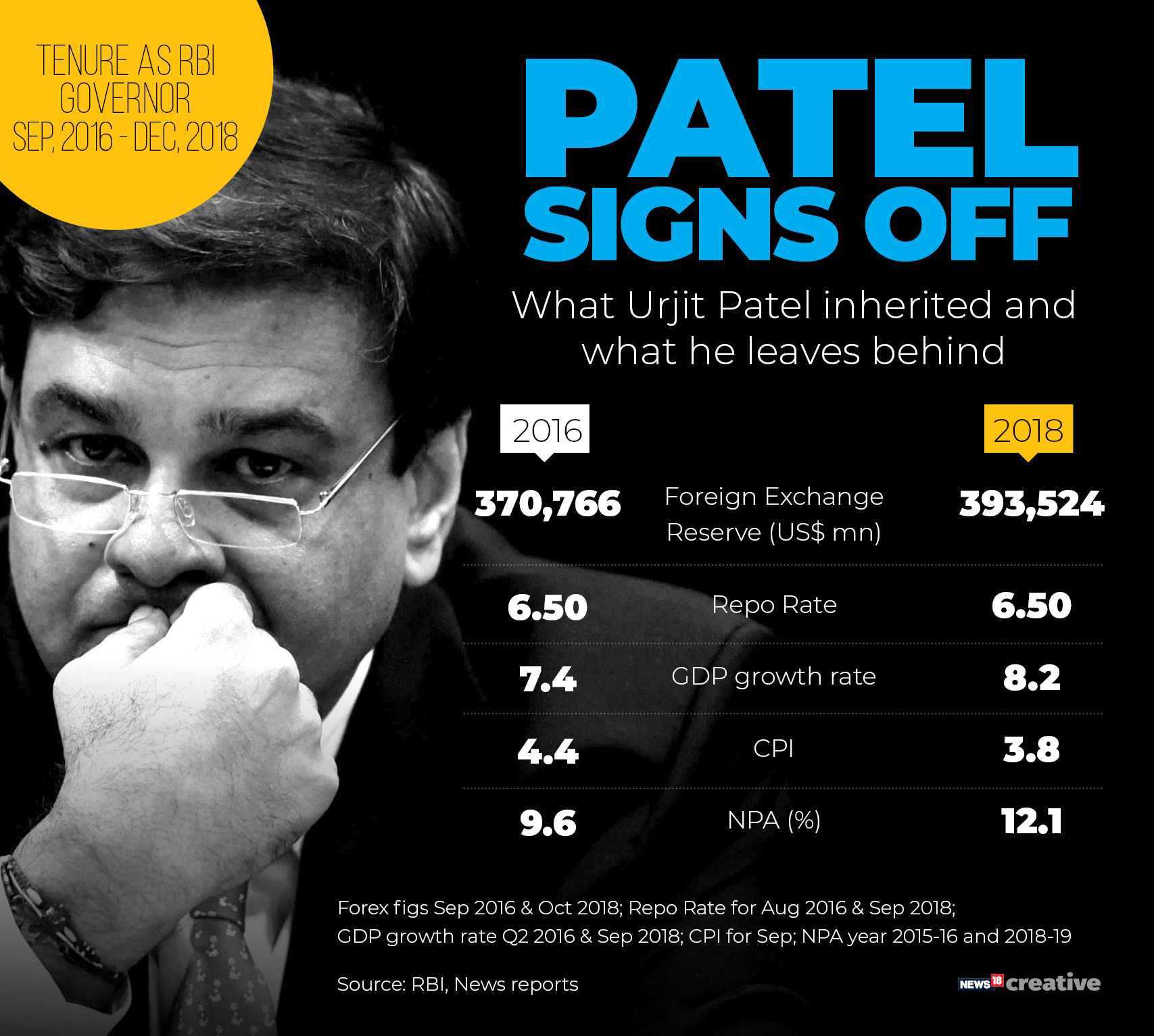 However, reacting to the speculations of resignation by deputy governor Viral Acharya, RBI spokesperson denied news reports.
“After the last board meeting of RBI, it was pointed out that everything was hunky-dory, that all the issues have been resolved. So quite clearly the resignation of Patel shows that nothing has changed and things are as bad as before," former finance minister Yashwant Sinha told CNBC-TV18.
His resignation is a clear sign of the government trying to interfere with the working of the RBI, they are trying to destroy the autonomous character of the bank, Sinha said, adding that after the resignation of Patel there is no reason for the finance minister to continue in his post.
“I feel that the ‘R’ in the RBI has been changed into a ‘C’ and the RBI is being made into another CBI," said former union minister Arun Shourie.
The defaulters, who have looted the banks are not willing to pay back their loans, they and their lobbyists have triumphed once again as they did in Raghuram Rajan’s case, Shourie told CNBC-TV18.
"Patel's resignation will be bad for our economy, RBI and the government," said senior BJP leader Subramanian Swamy.
"He should at least stay till July, until the next the government comes to power. The Prime Minister should call him and find out the reason and dissuade him from leaving in the larger public interest," Swamy said.
Last month, CNBC-TV18 had reported that Patel is considering all options including resigning from his post following an unprecedented attack on the central bank’s functioning by finance minister Arun Jaitley.
The government and the RBI have been fighting for weeks over how much autonomy the RBI should have as the administration of Prime Minister Narendra Modi seeks to reduce curbs on lending and to gain access to the RBI’s surplus reserves.
The rift worsened in October when Viral Acharya, one of the bank’s deputy governors, said in a speech that undermining central bank independence could be “potentially catastrophic”.
Patel, who completed two years in the central bank on September 4, has been steadfast in maintaining the top bank's independence and in handling the bad loan cases.
Within a month of Patel taking over the top job at the RBI on September 4, 2016, the Monetary Policy Committee (MPC) framework was introduced to decide on rates.
Despite often being called reticent, Patel has also been speaking up his mind through his lectures and articles, at his regular post-policy press meets and also before parliamentary panels. Officials at the RBI say his main focus has always been on implementing things.
Within days of the demonetisation move also, when he was being criticised by one and all for not speaking up, Patel had told PTI in an interview in November 2016 that the central bank was taking all necessary actions to "ease the genuine pain of citizens" with a clear intent to normalise the things as early as possible.
In 2014, the Patel-led committee recommended the RBI to follow an inflation-targeting approach, using consumer price inflation as the base, seeing inflation control as one of the key factors to stable economic growth.
Before his stint in the central bank, Patel, who holds a PhD in economics from Yale University and MPhil from Oxford, was an advisor to the top consulting firm Boston Consulting Group (BCG).
Patel was a part of the International Monetary Fund (IMF) between 1990 and 1995 where he had addressed central banks on debt market developments and banking sector reforms.
Between 1998 and 2001, he was a consultant to India's ministry of finance. He was also chosen to be a part of several government committees such as committees on direct taxes, infrastructure, telecom, civil aviation reforms and government pension systems.
Patel has also served in the private sector. He was a part of the Reliance Industries Ltd and IDFC Ltd group as the president of business development and as the executive director, respectively.
Check out our in-depth Market Coverage, Business News & get real-time Stock Market Updates on CNBC-TV18. Also, Watch our channels CNBC-TV18, CNBC Awaaz and CNBC Bajar Live on-the-go!
Tags