The first quarter earnings reports have been weak for private sector banks especially due to increase in stressed assets, deterioration in asset quality and decline in profitability. But another key area is the risk-weighted assets (RWAs) growth on a sequential basis which has been far higher than loan growth.

The sharp rise in risk-weighted assets of private banks mean they will consume higher capital than earlier envisaged.

What led to rise in risk-weighted assets? The Reserve Bank of India (RBI) believed that unrated exposure can pose challenges ahead

In its assessment, the RBI mentioned that unrated exposures can pose challenges in an accurate assessment of both the creditworthiness of borrowers and the capital levels in banks. The central bank modiﬁed the prudential regulatory guidelines in 2016 to plug the regulatory arbitrage in terms of risk weights between rated and unrated exposures above a speciﬁc threshold for the size of bank exposure to the borrower.

Exploiting this exposure threshold in a regression discontinuity design, this study shows that the policy had a desired impact in discouraging a switch among the treated group of borrowers from the rated to the unrated category. In aggregate terms, the change in policy resulted in a 50 percent decline in the treated borrowers’ likelihood of switching from rated to unrated categories over quarters.

The increase in RWAs meant that the banks had a lot of unrated customers/loans on which they had to increase their RWA.

There has been a 10.3 percent quarter-on-quarter rise in risk-weighted assets of RBL Bank in comparison to their loan growth of 4.7 percent. IndusInd Bank follows with 7.7 percent increase in sequential RWA against 3.8 percent QoQ loan growth while YES Bank’s RWA increased by 5.7 percent QoQ against a loan book decline of 2.2 percent.

The most comfortably-placed is Federal Bank, which saw a 2.65 percent QoQ growth in RWA against 1.64 percent QoQ loan growth, suggesting that it catered largely to rated entities only and had few unrated accounts to worry about. The off balance sheet credit exposure 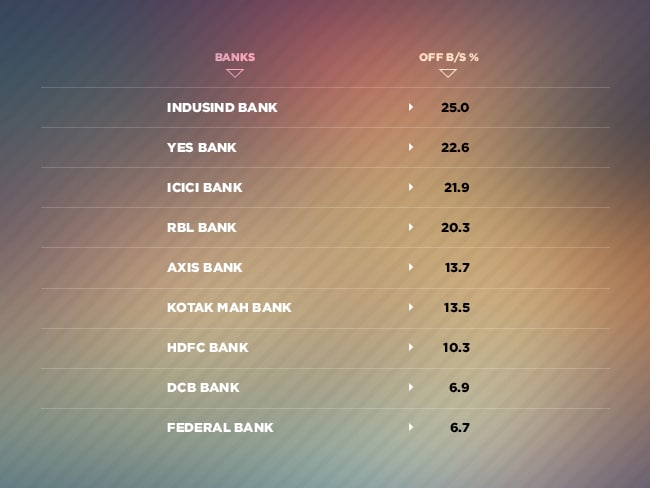 The capital adequacy ratio data shows sharp consumption of 139 basis points of capital for RBL Bank and 80 bps of capital consumption for YES Bank (despite decline in loan growth QoQ).

There was an improvement in capital adequacy ratio of Kotak Mahindra Bank and IndusInd Bank.