PSU banks continue to report net losses due to PCA framework, provisions on the ageing of NPAs, adhoc provisions and elevated slippages for some of them. Ex-Q1FY20, PSU bank’s losses are on the lower side when compared to last 7-8 quarters. However, the onus of bad results go-to mid and small private banks.

Some of these banks have increased their credit cost guidance (and they are looking to raise funds in order to enable them to make provisions) for FY20 as they hadn’t expected a slowdown in recovery or higher stress in their balance sheet. While PSU banks reported another quarter of net loss, some of them went all out on using their resources to mobilise income as loan growth remained tepid.

The mid/small private banks are the worst performers in Q2:

As mentioned in the previous qtr result update, the outlook for growth has worsened which was reflected by the slowdown in the economy. As also mentioned in the previous result update, outlook for private sector banks had weakened, it has further weakened for mid/small private banks while large private banks are going all out to grow their retail loans, seen as the key driver of growth going ahead for large lenders like HDFC Bank, ICICI Bank, and Axis Bank. Analysts continue to cut their estimates for several smaller peers like YES Bank and RBL Bank.

The pain came to a large extent from exposures to stressed names known in the NBFC and HFC sector, as well as from large stressed accounts like the Zee group. DHFL may prove to be a thorny account in Q3FY20 as bankers would need to treat it as an NPA if a resolution is not achieved before the quarter ends. Moreover, certain banks have already classified the account as an NPA while some others have made ad-hoc provisions towards it. The quarter also some banks like Federal Bank coping with the impact of floods in their core markets.

On average, PSU banks now have a provision coverage ratio of more than 70%. PSU Banks have also strengthened the provision coverage ratio on their NCLT accounts to >80%-90%. Recovery from these NCLT accounts will be a huge earnings booster for PSU banks in the coming quarters what with the Supreme Court upholding the right of the Committee of Creditors to decide on the distribution of resolution proceeds under IBC in the Essar Steel case.

Some of them are still in pain like IDBI Bank, PNB, Allahabad Bank, etc, but majority of them are out of the woods now.

There is a big differentiation between the men and the boys in private sector banks. While the large private banks aggressively expanding their retail reach and business, the mid and small private banks are reeling under tremendous pressure of stressed assets, rising credit costs and are in dire need of capital for survival.

With more capital coming in from the Govt, PSU banks are now in much healthier shape, barring a few like PNB and the banks under PCA. One niggling worry is that loans to stressed accounts like DHFL could turn NPAs in Q3FY20. But on the other hand, any recovery in NPAs or from stressed accounts, which is probable in H2FY20 may be a positive kicker.

Thus, while the market share of PSU banks continues to deteriorate, the outlook on profitability for most is much better now. And this could spell a better end to fiscal 2020. Slippages are loans that turn into NPAs as payments are due for more than 90 days. The negative impact that slippages have for a bank is they lead to lower interest income while higher provisioning & thus dent the earning capacity of a bank. It’s vice-versa impact i.e. declining trend of slippages coupled with loan growth means better earning capacity of the bank. 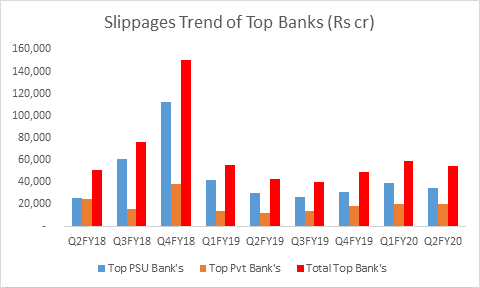 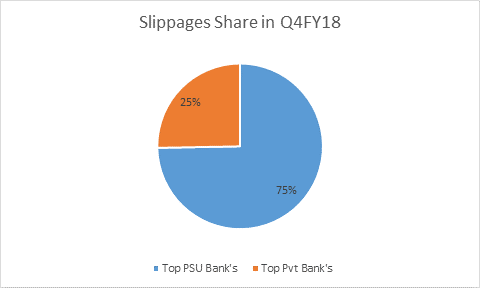 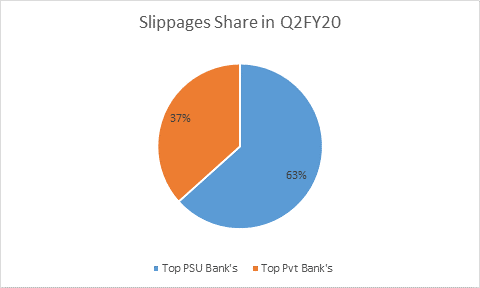 PSU banks back to reporting net loss; but it's okay!

PSU banks have reported a net loss of Rs4186 cr thanks to some heavy provisioning done by the likes of UCO Bank, IDBI Bank & Other PCA banks which are fighting their way out of PCA framework. The incremental stress in the balance sheet has been reducing in terms of SMA 1 & SMA 2. Slippages have been declining for them. With government capital infusion, the majority of the banks are now well strengthened in terms of capitalization. Higher provision coverage ratio also meant that PSU banks reported Net NPA below 5% for the third time in 15 quarters and it is expected to remain below 5% henceforth. PSU banks continue to lose their market share to private banks. PSU banks have lost market share of 990 bps or 9.9% in the last 16 quarters.

It can be said that Q2FY20 is the first quarter where the huge difference was seen between the results of large banks & mid/small private banks. The men are now concentrating on the next leg of loan growth i.e. RETAIL sector! They are expanding their branch network, increasing workforce, spending on advertisements, etc to capture the retail market. On the other hand, mid/small private banks are now reeling under the pressure of stress in the balance sheet. Banks like YES Bank, RBL Bank have increased their credit cost guidance along with a rise in stress portfolio in the bank & deterioration in asset quality to continue. Banks like Lakshmi Vilas Bank, with CRAR at 5.5-5.7%, YES Bank, etc are in dire need of capital for survival.

The net profit for private banks was at Rs10514 cr, down 3% YOY & 27.8% QOQ. The good part is that they continue to gain market share for the 16th qtr in a row on the back of strong capitalization. Healthy loan growth has also enabled them to make higher provisions despite an increase in provisions in Q2. The majority of the private banks saw a decline in their NIMs on a QOQ basis due to a steep rise in cost of funds. GNPA of private banks was at Rs1.4lk cr, up 5.7%QOQ. Some of the positive surprises in private bank results came from the likes of ICICI Bank, HDFC Bank & Axis Bank. Negative surprise came in from YES Bank, RBL Bank & IDFC First Bank. 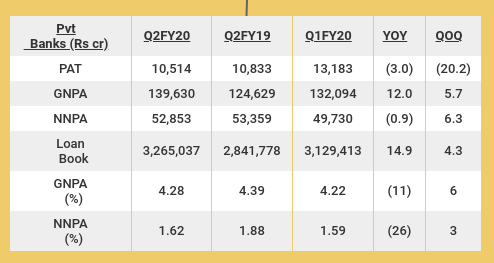 Slippage analysis of some of the large (sectoral based i.e. PSU & pvt sector) corporate banks