Analysis: PSU banks back in the black, profits of private lenders rise, but banking still not out of the woods

Analysis: PSU banks back in the black, profits of private lenders rise, but banking still not out of the woods

Though the PSU bank profits total a mere Rs 65 crore, and the outlook of private banks has started to weaken, the improved earnings have amplified hopes that a wrenching bad debt problem has begun to release its grip on the sector.

There is some good news finally on the banking front. PSU banks have reported profits for the first time in 10 quarters and their private sector counterparts have posted their highest quarterly profits in 16 quarters.

Though the PSU bank profits total a mere Rs 65 crore, and the outlook of private banks has started to weaken, the improved earnings have amplified hopes that a wrenching bad debt problem has begun to release its grip on the sector.
Sample this. PSU lenders such as Bank of Baroda, Corporation Bank, Punjab National Bank, Allahabad Bank and Central Bank of India reported net profit in the first quarter of FY20 compared with a net loss a year ago. Private lender HDFC Bank continued with its ‘20 percent’ profit growth momentum. On a year-on-year basis, a mix of PSU and private banks such as ICICI Bank, Bank of Baroda, State Bank of India, Central Bank of India and Bank of Maharashtra, among others, have turned in profits compared with losses a year ago.
The improved performance doesn’t mean banks are out of the woods. At least not yet.
The growth outlook has worsened due to economic slowdown, which has been highlighted by managements across FMCG, infra and other sectors, besides by bankers themselves.  Among PSU banks, IDBI Bank and Syndicate Bank reported huge losses; the former’s at Rs 3,801 crore and the latter’s at Rs 981 crore compared with the previous quarter.
Earnings of some private banks showed a similar sorry picture. IDFC First Bank’s net loss almost tripled quarter on quarter. Asset quality of others such as YES Bank, Equitas Holding and City Union Bank deteriorated significantly.
Indeed, slippages — loans that turn into NPAs for payments due for more than 90 days — of several private banks increased sharply; by as much as 60 percent quarter on quarter for lenders such as Axis Bank, YES Bank and Federal Bank.
Private banks such as RBL Bank and YES Bank have also forecast higher credit cost.
These factors apart, banks have exposure to stressed entities such as Sintex, DHFL, Jet Airways, Zee as well as the real estate and NBFC sectors. The impact from flood-affected areas in many states will also have a bearing on the earnings of the banks in the second quarter.
Banks are also facing delays at the National Company Law Tribunal, the court that deals with bankruptcy cases, to resolve debt positions of companies. On an average, PSU banks now have a provision coverage ratio, an indication of the provision made against bad loans from the profit generated, of more than 70 percent. No doubt, recovery from NCLT accounts will be a huge booster for the earnings of PSU banks in the coming quarters.
What the outlook says
Deposits are hard to come by and are coming at expensive rates at that. Banks cut deposit rates in June 2019 and the effect will be seen in the second quarter’s cost of funds.
Loan growth may remain tepid due to the economic downturn as well as the second quarter generally being the weakest of the financial year in terms of loan growth. Banks have started cutting lending rates as well. There are also a few stressed assets that need to be accounted for in the second quarter. Majority of the treasury gains have been taken on the profit and loss statement by banks.
Though there has been a marked improvement in the profitability of the bigger PSU banks, the market share of PSU banks as a whole continued to decline. Some of them are still reeling under financial pain.
Except for NCLT cases, recovery in NPAs or stressed accounts seems unlikely in the second quarter. The future holds out hope though — one may see gradual recovery from NPAs from the third quarter onwards.
The slippage picture
What about the impact of slippages? Elevated slippages lead to lower income and banks have to make higher provisioning, which thereby dents their earning capacity. The worst of slippages was seen in the fourth quarter of the last financial year on account of RBI’s circular on restructured loans. There is little to show that the scene has improved.
Slippages showed an increase for two quarters in a row and the exposure to stressed accounts such as DHFL, Zee etc weigh in on the banks.
Overall, slippages for top banks increased by 19.5% quarter on quarter, led by 26.7  percent spike in slippages of top PSU banks.
Mixed bag on bad loans
The gross NPAs of the sector were at Rs 9.28 lakh crore, down 7.6 percent year on year and up 0.6 percent quarter on quarter. The GNPA ratio was at 9.97 percent compared with 11.86 percent year on year and 9.92 percent quarter on quarter.
The core provision coverage ratio improved to 62.2 percent compared with 51.6 percent YOY and 61.8 percent QOQ. Gross NPA of PSU banks was flat QOQ in absolute value while their Gross NPA ratio increased by 9 bps QOQ due to decline in loan book.
Gross NPA of private banks increased by 3.8 percent QOQ, and due to healthy loan growth around 4.6 percent, their GNPA ratio increased by only 10bps QOQ.
PSU banks continued to strengthen their balance sheet with provision coverage ratio (PCR) that aided the overall PCR of banking industry to 62.3 percent compared with 51.2 percent YOY and 62 percent QOQ. This PCR is without technical writeoff.
The core provision coverage ratio of private banks was at 61.8 percent compared with 54.5 percent YOY and 61.05 percent QOQ.
A higher coverage ratio reflects a stronger balance sheet to sustain sudden jolts on NPAs or stressed assets. The higher provision coverage ratio meant that PSU banks, for the second time in 14 quarters continued to report net NPA below 5 percent (also aided by higher writeoffs as well).
PSU bank profits
Though PSU banks reported a meager profit of Rs 65 crore for the first quarter of FY20, they are in black for the first time in the last 10 quarters. Remember, the profits came despite a rise in the incremental formation of bad loans or slippages. 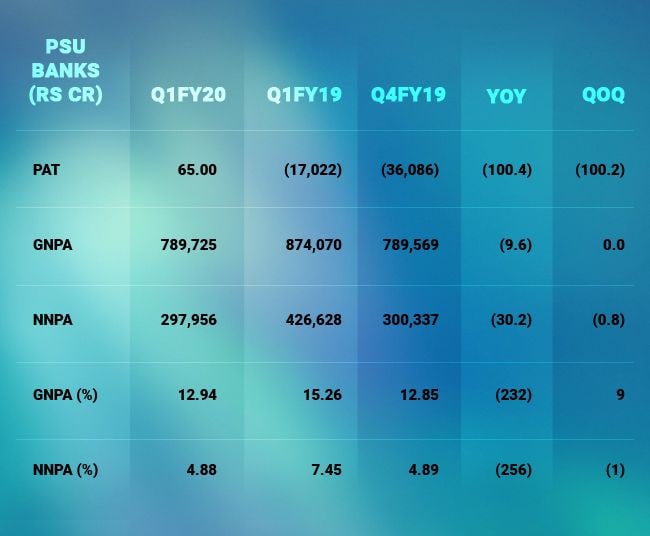 Provisions remained high due to ageing of NPAs as well. The net NPA of these banks is expected to remain below 5 percent for the foreseeable future.
But the bad news is that PSU banks continued to lose market share to private banks. PSU banks have lost market share of 8.94 percent in the last 15 quarters.
Though net interest margin may improve in Q2FY20 as they have been more than prudent in cutting deposit rates, slippages could play spoilsport. Slippages remained high in Q1FY20 and there are many stressed accounts that can turn bad in the second quarter.
Residual stress in the balance sheet holds out hope. At single digits (as a percentage of the loan book, this is perhaps the lowest ever residual stress in the balance sheet of PSU banks in recent years.
Private banks profits
The net profit of private banks was at Rs 13,223 crore, up 30.7 percent YOY and 27.8% QOQ. The quarterly profits of private banks are the highest in the past 16 quarters. But what is worrying is that the guidance on stressed assets is on the higher side, leading to an increase in credit cost (provisions for NPA by advances ratio) for FY20.
Private lenders, however, continued to gain market share for the 15th quarter in a row on the back of strong capitalisation. Healthy loan growth has also enabled them to make higher provisions despite increase in provisions in the first quarter.
Majority of the private banks saw a decline in net interest margins on a QOQ basis due to a steep rise in cost of funds.
The likes of ICICI Bank, HDFC Bank and Axis Bank surprised with good results while YES Bank, IndusInd Bank and IDFC First Bank disappointed.
PSU banks under PCA
Gross NPAs of banks under the Reserve Bank of India’s prompt corrective action plan (PCA) for state-owned banks with high levels of bad debt and inadequate capital rose 0.7 percent QOQ at Rs 1.59 lakh crore. There are only five banks under the PCA framework after the RBI curtailed the list following an improvement in asset quality and capital ratios of some lenders.
The share in GNPA was at 17.13 percent vs 17.11 percent QOQ. Loan growth continued to decline for PCA-based banks.
Loan book was at Rs 5.93 lakh crore, down 3.08 percent QOQ. Due to shrinkage in their balance sheet, their credit book market share has declined to 6.37 percent compared with 6.58 percent QOQ.
Check out our in-depth Market Coverage, Business News & get real-time Stock Market Updates on CNBC-TV18. Also, Watch our channels CNBC-TV18, CNBC Awaaz and CNBC Bajar Live on-the-go!