M&M Financial Services share price: The stock lost about 21 percent of its value in two sessions, after the RBI restricted the company from conducting any recovery or repossession operations through outsourcing arrangements.

Mahindra & Mahindra Financial Services shares continued to face selling pressure for a second straight session on Monday, after the RBI restricted the financier from conducting any recovery or repossession operations through outsourcing arrangements.
The M&M Financial stock fell by as much as Rs 14 or 7.2 percent to Rs 180.5 apiece on BSE amid heavy selling in the scrip. At this level, the M&M Financial stock has taken its losses to 19.3 percent in two back-to-back sessions.
As many as 9.8 lakh shares of the company changed hands on BSE, as against a daily average of 4.4 lakh in the last two weeks, according to exchange data.
The RBI said the action is based on certain material supervisory concerns observed in the company with regard to the management of its outsourcing activities. It, however, said the company may continue with recovery or repossession activities through its own employees.
The regulator's move came after a pregnant 27-year-old woman was allegedly crushed to death under the wheels of a tractor being forcibly driven away by a recovery agent of MMFSL in Hazaribagh district of Jharkhand.
In connection with the death, the police arrested one Roshan, an employee of TeamLease, a firm hired by Mahindra Finance. Mahindra Group CEO and Managing Director Anish Shah condoled the death and assured that the incident would be investigated from all aspects.
Brokerages have mixed views on the company. 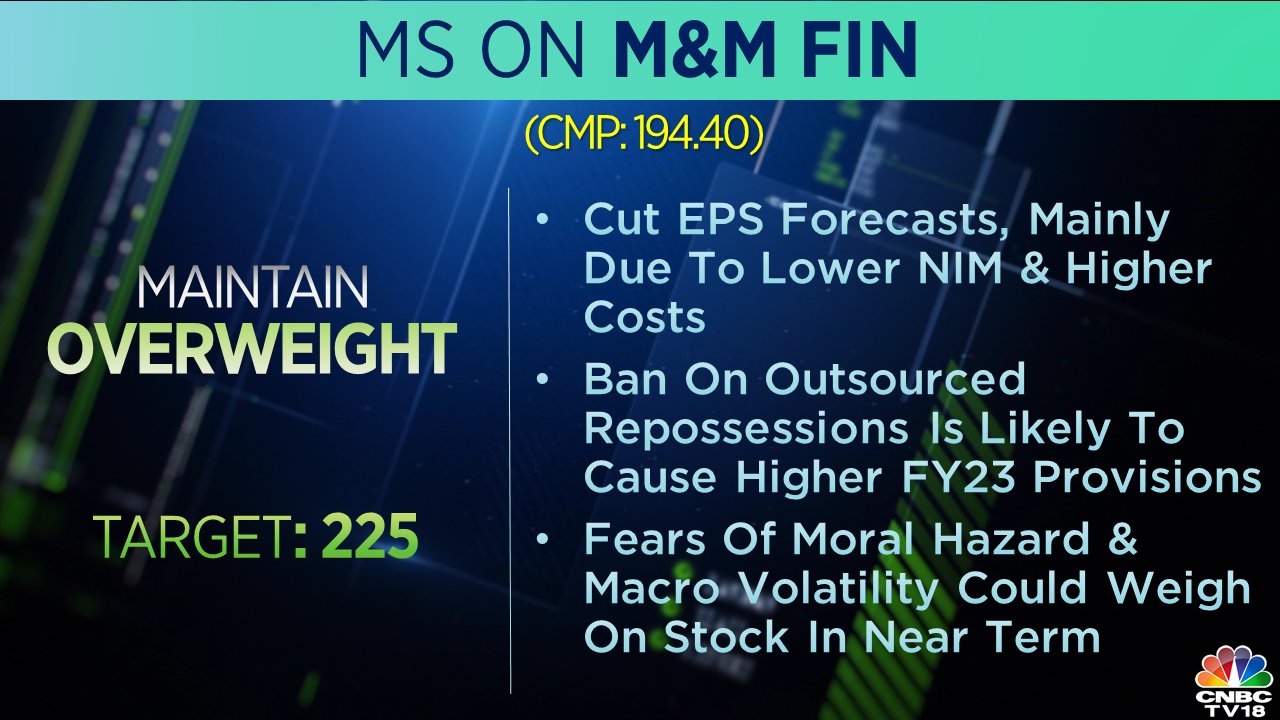 Morgan Stanley cut its earnings per share estimates for Mahindra & Mahindra Financial citing a lower net interest margin and higher costs
The brokerage said the ban on outsourced repossession activities is likely to cause higher provisions in the year ending March 2023.
Morgan Stanley's target price of Rs 225 for M&M shares implies upside potential of 15.7 percent from their closing price on Friday.

Jefferies maintained an 'underperform' rating on M&M Financial with a target price of Rs 155, suggesting 20.3 percent downside from Friday's level.

The ban could cause a 75-80 percent blow to the company's repossession activity leading to higher loan losses or till it readjusts its processes.