LIC is a major stakeholder in a dozen state-owned companies, including several PSU banks, NTPC, Bharat Electronics, GAIL, Bharat Petroleum, Indian Oil, BEML and Nalco. Among the recent investments, LIC bailed out IDBI Bank by acquiring a 51 percent stake from the government in August 2018.

State-owned insurer Life Insurance Corporation of India's total investment in the public sector enterprises between the fiscal year 2014-15 and 2018-19 was nearly equal to the total amount the company invested in state-owned firms since its inception in 1956.

India's largest insurer infused Rs 10.69 lakh crore in the PSUs between FY15 and FY19, the first term of the Narendra Modi government, according to a report released by the Reserve Bank of India. As of FY14, LIC's total investment in the public sector companies stood at Rs 11.94 lakh crore.
As of FY19, the insurer has a total investment of Rs 22.64 lakh crore in PSUs, showed the RBI's Handbook of Statistics on Indian Economy 2018-19. 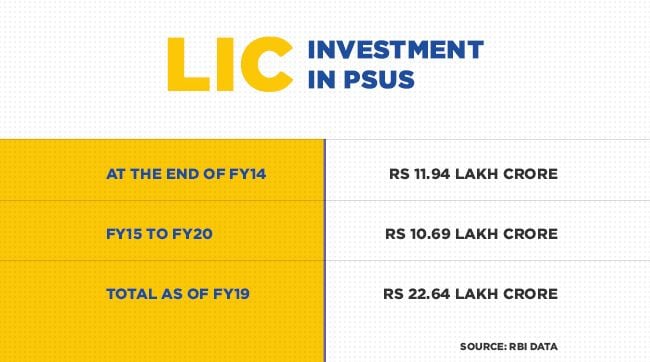 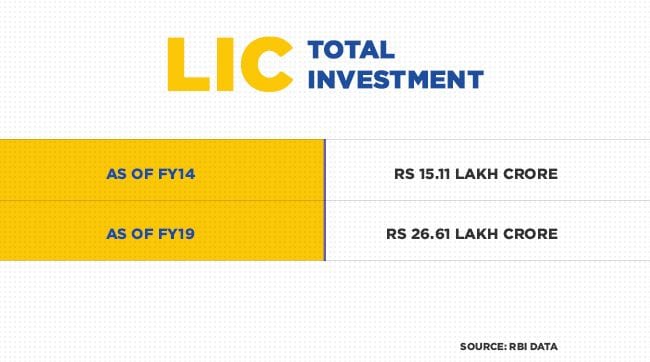 LIC is a major stakeholder in a dozen state-owned companies, including several PSU banks, NTPC, Bharat Electronics, GAIL, Bharat Petroleum, Indian Oil, BEML and Nalco.
Among the recent investments, LIC bailed out IDBI Bank by acquiring a 51 percent stake from the government in August 2018. LIC has infused about Rs 20,000 crore into it to revive the bank. LIC’s reported profits were of Rs 23,621 crore from its equity investment during 2018-19, against Rs 25,646 crore during 2017-18, reported MoneyControl.
CNBC-TV18 earlier this month reported that the government was planning to reduce its holdings in select central public sector enterprises to below 51 percent. The move could impact LIC's investment decisions. LIC may not be able to sell shares held in PSUs for some time, reported BloombergQuint, citing an anonymous government official.
The government on July 5 hiked its disinvestment target in the current fiscal from Rs 90,000 crore to Rs 1.05 lakh crore. The hike in the sell-off target comes amid the slow growth in tax proceeds, forcing the government to raise revenue from non-tax revenue sources.
In absolute terms, the fiscal deficit — a gap between expenditure and revenue — was Rs 5,47,605 crore at the end of July, as per the data released by the Controller General of Accounts on Friday. The fiscal deficit stood at 86.5 percent of the 2018-19 budget estimate in the year-ago period.
The fiscal deficit for 2018-19 came in at 3.39 percent of GDP, marginally lower than estimated 3.4 percent.
Check out our in-depth Market Coverage, Business News & get real-time Stock Market Updates on CNBC-TV18. Also, Watch our channels CNBC-TV18, CNBC Awaaz and CNBC Bajar Live on-the-go!