In an interaction with CNBC-TV18, Canara Bank CEO LV Prabhakar said he is confident of maintaining double-digit credit growth in the six months ending March 2023.

Canara Bank — India's third-largest state-run lender — is confident of maintaining its net interest margin, riding on the back of strong loan growth. "Out NIM is going to increase... We are not going to compromise on NIM," Canara Bank MD and Chief Executive Officer LV Prabhakar told CNBC-TV18.
The remarks from the top brass of the bank come days after it reported its highest net interest margin — a key measure of profitability for lenders — in nine quarters, at 2.83 percent.
"Our policy is (that) we want to take care about our stakeholders including depositors, borrowers, investors and staff," he said.
Canara Bank is betting big on loan growth, especially in its retail, agriculture and MSME (RAM) segment.
Exuding confidence of strong credit growth in the quarters ending December 2022 and March 2023, the CEO said: "Overall, we see that Canara Bank's credit growth will be in decent double digits in Q3 and Q4 (October-March). It is stable growth. This is evident."
This week, the state-run bank beat Street estimates with an 89.5 percent jump in its net profit for the July-September period.
Its net interest income — or the difference between interest earned and interest paid — increased 18.5 percent. 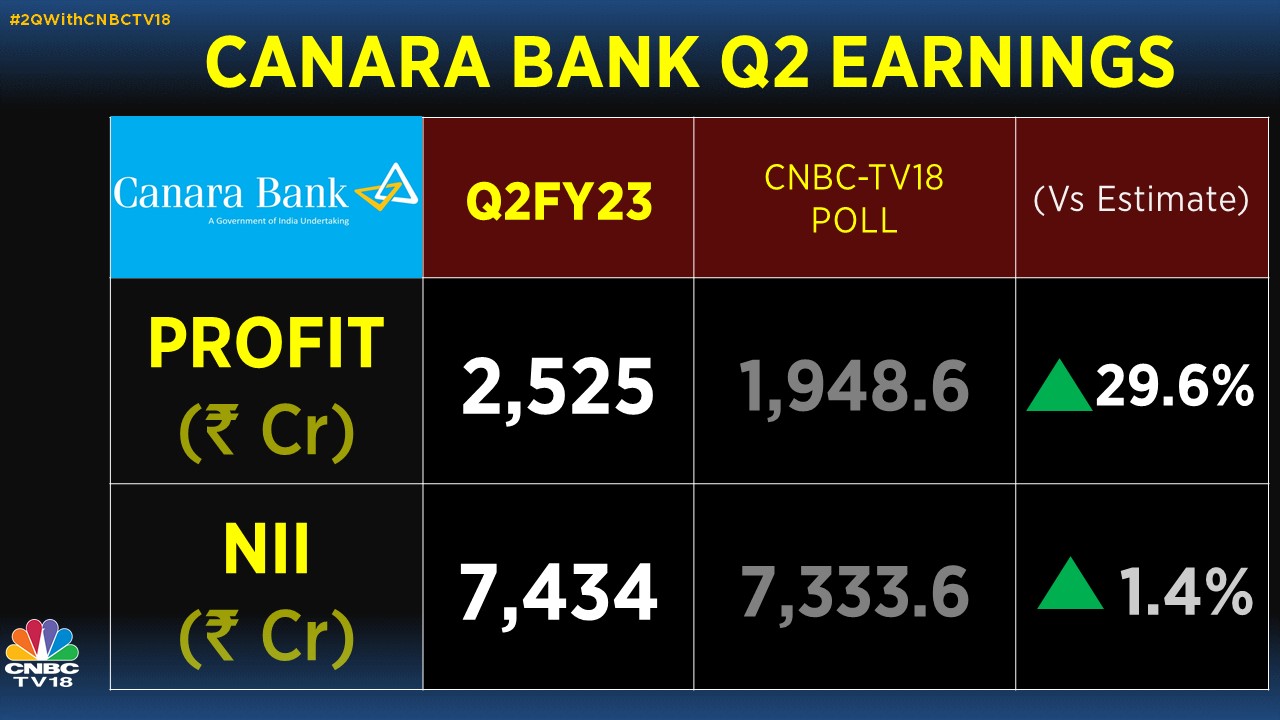 Canara Bank concentrates on two types of loan growth, RAM and corporate. The management asserted that even if there is a slowdown in one, the other takes care about the overall loan growth.
"All the sectors don't stop doing very well all of a sudden... Every sector will do well as per the present trend, which is what I am observing in the coming 2-3 quarters," said Prabhakar, who expects "excellent" loan growth in the RAM segment in the six months ending March 2023.
Prabhakar believes Canara Bank will comfortably conclude the year ending March 2023 with loan growth to the tune of 12-13 percent.
ALSO READ: Top fund manager describes what a 'goldmine' among PSU banks should have
He said the bank will bring down its gross non-performing assets — or bad loans — below six percent by March 2023.
Canara Bank reported improvement in asset quality in the July-September period. Its gross non-performing assets — or bad loans as a percentage of total loans — came down to 6.37 percent from 6.98 percent in the previous three months.
Its net non-performing assets shrank 6.6 percent sequentially, and provisions  came down by 1.4 percent.
Canara Bank shares have rewarded investors with a return of 8.5 percent in the past one month, a period in which the Nifty50 benchmark has declined 1.3 percent.
Catch latest market updates with CNBCTV18.com's blog
Check out our in-depth Market Coverage, Business News & get real-time Stock Market Updates on CNBC-TV18. Also, Watch our channels CNBC-TV18, CNBC Awaaz and CNBC Bajar Live on-the-go!