Axis Bank — India's fifth largest bank by market value — on Thursday reported a net profit of Rs 5,329.8 crore for the July-September period, beating Street estimates by a huge margin. The quarterly net profit increased jumped more than 70 percent compared with the corresponding period a year ago — the highest growth in 25 quarters, boosted by an all-round strong performance. 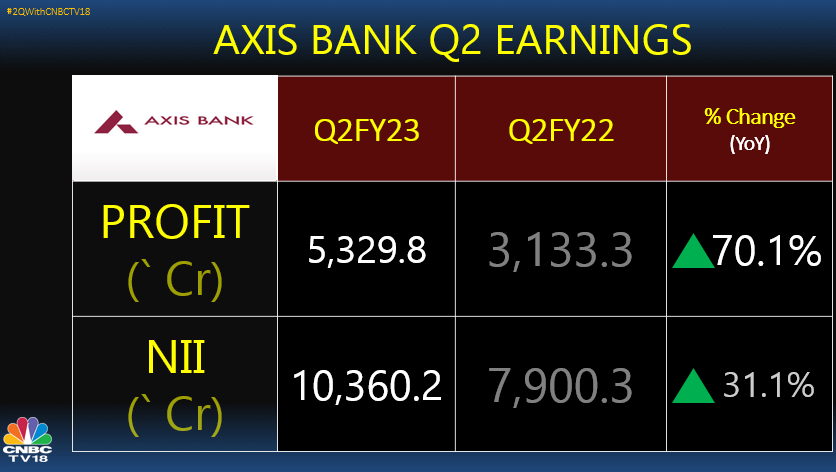 The lender's net interest income — or the difference between interest earned and interest paid — jumped 31 percent to Rs 10,360.2 crore compared with the year-ago period, according to a regulatory filing. Analysts in a CNBC-TV18 poll had estimated Axis Bank's quarterly net profit at Rs 4,343.7 crore and net interest income at Rs 9,779.6 crore.
Axis Bank's quarterly numbers come at a time when lenders are eyeing the ongoing festive season in India, which typically leads to higher consumer borrowing, amid a rising interest rate environment as central banks scramble to tame red-hot inflation.
“Over the past 12 months, we have made significant strides across every identified priority area. The focus on customer obsession and digitisation has got our acquisition engine humming. The core operating profits and
margins have grown on the back of strong performance across business segments," said Amitabh Chaudhry, MD and CEO, Axis Bank.
The lender's net interest margin — a key measure of profitability for financial institutions — hit a 26-quarter high of 3.96 percent.
The CEO said the bank's operating performance as well as net interest margin are best in the industry. "We are the fastest growing card acquisition franchise...now rated as the world’s highest rated mobile banking app. We are leading the digital revolution in financial sector," Chaudhry said on a post-earnings conference call.
He acknowledged a few challenges on the domestic economic front.
The lender's asset quality improved, as its gross bad loans as a proportion of total loans reduced to 2.5 percent in the July-September period compared with the previous three months.
Its net bad loans came down to Rs 3,995.4 crore — a sequential decline of 16.4 percent. 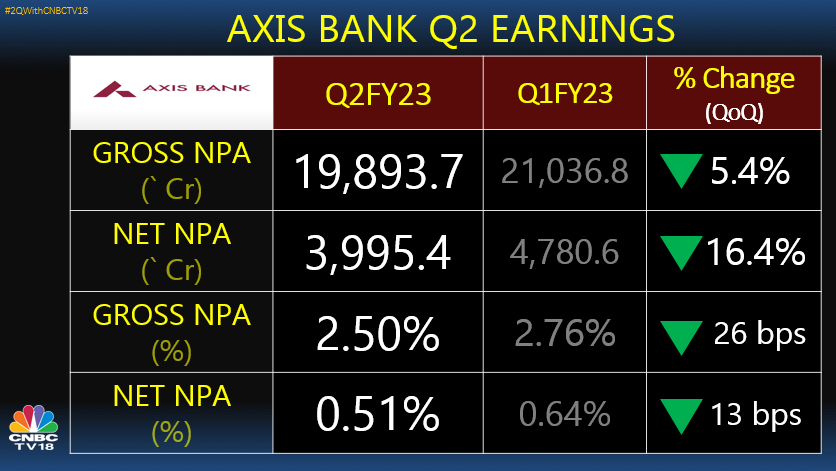 Axis Bank shares succumbed to selling pressure ahead of the earnings announcement.