Updated : February 22, 2019 01:47 PM IST
Both entities are relatively smaller entities with assets under management of Rs 21,765 crore and Rs 4,915 crore respectively.
AU and MAS are run by first generation entrepreneurs who know their respective businesses well and have a proven track record of navigating their businesses through different economic cycles.

Once a darling of the markets, with bumper listing gains in 2017, AU Small Finance Bank (AU) and MAS Financial Services (MAS) have had a rough ride in recent times. AU is down almost 22 percent from its 52-week high and 16 percent lower than the level at which Temasek had picked up equity in the company last June. MAS (CMP: Rs 542, M Cap: Rs 2,963 crore) too has seen a significant correction, down by close to 18 percent from its listing price.

Did investors get their investment thesis wrong? Or are there still long-term opportunities that are now available at a more reasonable valuation?

We believe there are fundamental reasons for these businesses doing well, going forward. Here are the reasons:

Both entities are relatively smaller entities with assets under management of Rs 21,765 crore and Rs 4,915 crore respectively. That means there is enough headroom for growth without getting impacted by broader macro headwinds.

AU and MAS are run by first generation entrepreneurs who know their respective businesses well and have a proven track record of navigating their businesses through different economic cycles. The presence of marquee shareholders in both companies showcases the faith of long-term investors in their growth journey.

Finally, in a system where growth is hamstrung by lack of capital for many players, both AU (capital adequacy ratio of 19 percent) and MAS (CAR: 29.43 percent) have enough resources to capture market share in a weak competitive landscape.

AU Small Finance Bank – all about the growth journey

Promoted by first generation entrepreneur Sanjay Agarwal, AU successfully transitioned to a small finance bank (SFB) from its earlier asset financing NBFC avatar in April, 2017. It operates in eleven states of the country (Rajasthan and a few states of north and west India) and created a niche by focusing on a high growth segment (customers include low and mid income individuals and micro and small businesses) while ensuring minimum asset quality issues, thanks to robust processes and long experience in the market.

The reported earnings post listing and conversion to the bank have been much less impressive compared to the robust growth in business. The high upfront cost of conversion to a bank coupled with compression in interest margin took a toll on the numbers.

The advances book has risen by 2.8 times to Rs 20,000 crore over the last seven quarters with diversification to newer businesses like business banking, gold loans, home loans, agri-SME, consumer durables and two-wheelers. The diversification and de-risking of the book has resulted in close to 200 basis points decline in yields. However, the riskiness of the portfolio is coming down with a declining ratio of risk weighted assets to total assets. While this has resulted in compression in interest margin, it should gradually stabilise as the bank becomes successful in garnering deposits and brings down the cost of funds. In the past seven quarters, deposits have risen over 15 times from Rs 815 crore in Q1 FY18 to Rs 12,573 crore in Q3 FY19. Today, deposits fund close to 67 percent of advances compared to 11 percent seven quarters back. However, CASA (low cost current and savings accounts) is languishing at 24 percent and deserves focus.

The conversion to a bank has resulted in an increase in up-front or initial costs. Consequently, cost to income ratio (operating expenses to net total income) has risen to 61 percent, much higher than peer group banks (usually less than 50 percent). Going forward, as the bank sweats its investment and sees improved traction in fees from an expanded distribution network, this ratio should moderate, providing a fillip to earnings.

What stands out for AU amid the high growth is its ability to contain asset quality stress with gross and net non-performing assets at 2.1 percent and 1.3 percent of advances respectively.

We see a strong and profitable growth journey ahead. Seen in this context, the correction has rendered the valuation reasonable. MAS – A slow but steady NBFC for the long run

Unlike AU, where growth is the hallmark of the business, MAS is a cautious NBFC based out of Gujarat that has weathered several sectoral challenges in the past and is coming out with flying colours from the headwinds confronting the NBFC space now.

Promoted by Kamlesh Gandhi and Mukesh Gandhi, this Gujarat-based NBFC operates across six states and Delhi although a majority of the branches are in the economically vibrant states of Gujarat and Maharashtra.

Over the years, the company has grown its book in a calibrated manner without taking on unnecessary risk. 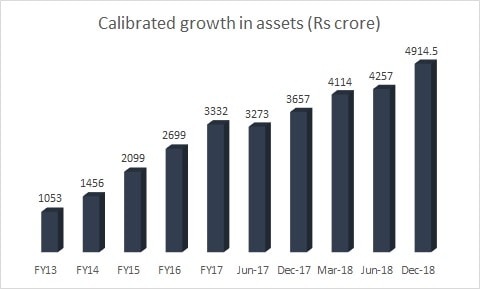 MAS has a unique sourcing model. In addition to its sales team, the company has entered into commercial arrangements with a large number of sourcing intermediaries, including commission based Direct Selling Agents and revenue sharing arrangements with various dealers and distributors, where part of the loans that go bad are guaranteed by such sourcing partners. It has over 120 small NBFC partners for sourcing business.

The company has stringent qualitative and quantitative evaluation criteria that keeps a check on delinquency. This is reflected in the numbers with the Gross NPA and net NPA at 1.19% and 0.95% of advances respectively. 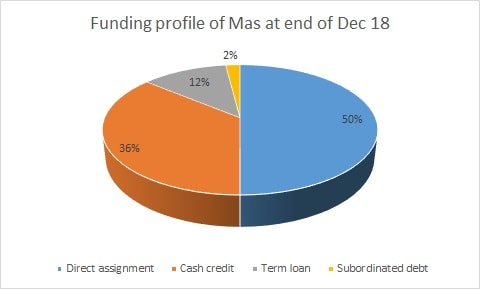 The diversified funding profile, together with a big demand from banks for assets originated by the company, has shielded it in the wake of the funding crisis in NBFCs. While a rise in funding cost might impact near-term margin performance, there is little risk to its growth. 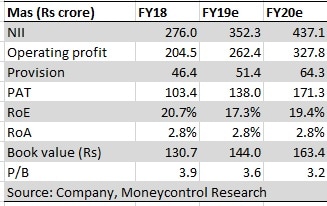 The current weak sentiment may be just the right opportunity to gradually accumulate these high quality businesses for the long term.

Disclosure: The views and investment tips expressed by investment experts are their own and not that of the website or its management. Users are advised to check with certified experts before taking any investment decisions.