Updated : September 18, 2018 07:41:13 IST
Arun Jaitley said Insolvency and Bankruptcy Code was a defining moment in the creditor-debtor relationship and ended the culture of creditors chasing debtors.
Talking on bank merger, finance minister said boards of Dena Bank, Vijaya Bank and Bank of Baroda will meet shortly to discuss this amalgamation.

Union finance minister Arun Jaitley on Monday blamed adventurous lending from 2009-2014 as the cause of non-performing assets (NPA) in Indian banks.

Jaitley said Insolvency and Bankruptcy Code, 2016 (IBC) was a defining moment in the creditor-debtor relationship and ended the culture of creditors chasing debtors. Talking on bank merger, finance minister said boards of Dena Bank, Vijaya Bank and Bank of Baroda will meet shortly to discuss this amalgamation and no employee will be faced with an adverse service condition post merger.

Jaitley said government's announcement of bank merger indicate confidence, business as usual and added that procedure with respect to earlier amalgamations will all be followed. Talking on basis of selecting banks for merger, Jaitley said stronger bank must have the strength to support the weak bank.

Earlier, department of financial services secretary Rajiv Kumar said government has decided to merge Dena Bank with Vijaya Bank and Bank of Baroda and the boards of three banks have been told to consider the amalgamation.

The amalgamated bank would be the third largest bank in India and will be strong competitive lender with economies of scale, he said adding the three would have synergies for network, low-cost deposits and subsidiaries. 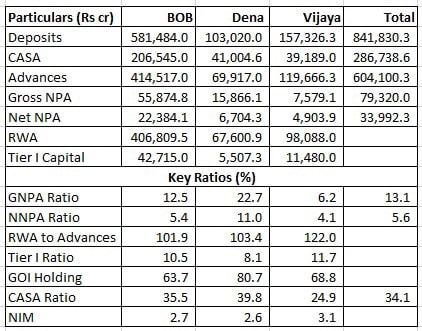 Kumar said the asset quality pressures have peaked and steps have been taken to clean up the banking system.

Addressing the media,  he said the approach of the government is to make the foundation of banking strong to ensure no repeat of past errors.

The ministry of finance said, "The alternative mechanism comprising of its chairperson, the union finance minister Arun Jaitley and cabinet ministers, Piyush Goyal and Nirmala Sitharaman met in New Delhi on Monday and decided that Bank of Baroda, Vijaya Bank and Dena Bank may consider amalgamation of the three banks. The envisaged amalgamation will be the first-ever three-way consolidation of banks in India, with a combined business of Rs 14.82 lakh crore, making it India’s third largest bank."

In a press release, ministry of finance, said, "The consolidation will help create a strong globally competitive bank with economies of scale and enable realisation of wide-ranging synergies. Leveraging of networks, low-cost deposits and subsidiaries of the three banks has the potential of yielding significant synergies for positioning the consolidated entity for substantial rise in customer base, market reach, operational efficiency, wider bouquet of products and services, and improved access for customers."

To transform Indian banking in to responsible and responsive, the Department of Financial Services (DFS) has initiated several measures including clean credit, leveraging honesty, appointments on merit and no interference in commercial decisions.

Additionally, strict enforcement of conditions of loan sanctions, stressed asset vertical in banks, transparent recognition of NPAs, upfront provisioning for losses on NPAs, agenda for reforms,  recalling of expensive AT1 bonds, rationalisation of overseas branches and effective management of operational risks, collection of past details of borrowers for loans of over Rs 50 crore.

On proposed merger of three banks, Sanjiv Bhasin, executive vice president-markets and corporate affairs, India Infoline, feel positive for the deal and the biggest gainer in the market will be Dena Bank.

Bhasin said market will be unkind to Vijaya Bank and Bank of Baroda and stocks will fall tomorrow.

"You have Rs 3,700 crore market of Dena Bank and it gets merged with ten time more market cap of Rs 36,000 crore of Bank of Baroda and somewhere in between Rs 7,800 crore is Vijaya Bank," Bhasin said.

"So combined you will have a Rs 48,000 crore market capitalisation. The synergies seem very positive in the longer-term and in short run the government has got away without infusing further capital and it may have been a lull in the storm. The market momentarily will try and balance the three but in the longer run it will create a strong franchise," Bhasin added.

Bank of Baroda managing director and chief executive officer PS Jayakumar said that according to Rajiv Kumar, the Reserve Bank of India (RBI) is on board with respect to the merger and personally, I am not privy to the discussion between the government and the apex bank.

Jayakumar said, "One of the slides that financial secretary had was that capital is going to be available if required. So with benefit of scale working in, with greater distribution, with more opportunities for products for our customers etc., a reasonable assumption is that there will be good opportunity to go, but it is something that will happen in due course."

RK Bakshi, former executive director, Bank of Baroda believes that bank merger is a very big bold and a very intelligent move by the government, "We have been hearing of amalgamation, mergers and consolidation in banking industry right from early 2000’s. But no proposal could really materialise. State bank merger was a different and that also happened very recently."

"Main thing was, do we merger five banks and which banks to choose. They have chosen very intelligently as Dena Bank and Bank of Baroda are Gujarat and Mumbai-based banks. They have got large networks and will offer a lot of scope for consolidation of branches and therefore efficiency of operation. They can cut expenditure by that and render good service," Bakshi said.

Vijaya Bank, managing director and chief executive officer, Sankara Narayanan, said, "We are not interested in a consolidated entity than thinking about who is the head of the organisation. The issue is a sounder entity, probably the third largest banking organisation in India with better reach better capital and definitely wide range of products to meet all customer needs."

According to Narayanan, he was informed about the merger just a few minutes back, "We will take it to the board. The honourable FM also suggested that the board will take a call as far as the amalgamation is concerned."

Talking on board meeting, he said, "In another 10 days’ time, we will meet and take a call. There is no timeline and it will go as per the normal schedule time which may take. We will probably meet with other two banks and decide how to proceed."

R Gandhi, former RBI deputy governor, said, "I agree with RK Bakshi views, that it's an intelligent move, because there has always been one end of the expectations of how to deal with band banks and banks which are in problem.”

Former Securities and Exchange Board of India (Sebi) executive director, JN Gupta, consider bank merger as a very bold move on the part of the government, “Again, somebody will gain and somebody will lose in the merger. But ultimately, long-term benefit will be seen."

G Kannan, chief executive officer, Indian Banks Association, said mega merger is a good step and having 20 banks in public sector doesn’t really make sense, "Two-three years ago, there was a discussion on the merger – a need for having 3-4 large global banks which can compete in international market and it will also have large capital, risk bearing capacity."

"So, whatever be the reasons, we have been considering and this step of creating one single banks by merging two strong banks and one relatively weaker bank could be the first step for consolidation and merger," Kannan said.

We have some advantages along the way. It cannot happen overnight but 6-12 months down the line, there are strengths for each of the banks and there are weakness of some of the banks. Overall, they will come out stronger," he added.
Tags Arun Jaitley Bank Bank of Baroda banks BJP government Centre Dena Bank Finance Minister GDP NPA NPAs Rajiv Kumar RBI Vijaya Bank
Published : September 17, 2018 06:16 PM IST