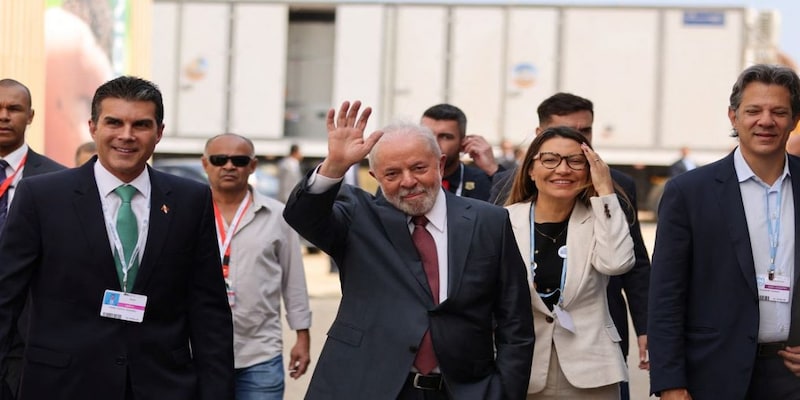 Brazil is ready to step up measures to protect the Amazon rainforest — the 'lungs' of the planet which has been choked due to record deforestation this year. Making a heroic entry at COP27 summit in Egypt on Wednesday, Brazil's President-elect Luiz Inacio Lula da Silva renewed his pledge to fight deforestation and offered to hold future UN climate talks.

"There is no climate security for the world without a protected Amazon," he said, explaining he wanted people to see the region. "We will spare no efforts to have zero deforestation and the degradation of our biomes by 2030," he said at COP27. He noted that in 2021, Brazil had a deforestation of 13,000 sq km. "The destruction will stay in the past," he was quoted by the Guardian as saying.

Lula went on to bring in focus his strategy for attaining "zero deforestation". He said efforts to fight climate change will have the highest profile in his next government. "We will strengthen oversight bodies. We will punish illegal activities: gold miners, loggers, farmers," he said. Lula also announced a ministry for Indigenous people.
Also Read: At COP27 climate talks, frustrations flare over 'too many unresolved agenda items'
He also sought to make Brazil the host of COP30 in 2025 and said in a tweet that he would aim to put the venue in the Amazon rainforest, rather than the more populous coastal region.
He further confirmed that Germany and Norway will reopen the Amazon fund, which was closed under the previous Jair Bolsonaro-led government.
Commenting on the climate financing issues at COP27, Lula said, "We need financial mechanisms to remedy loss and damage caused by climate change. We cannot postpone this debate...It is time to act. We cannot live with this rush towards the abyss."
ALSO READ | COP27: Counting the rising cost of climate disasters
'Brazil is back'
Lula won the Brazil presidential election last month, defeating Jair Bolsonaro, who presided over the mounting destruction of the Amazon rainforest — once a great carbon absorber.  During his tenure, Bolsonaro had also reportedly refused to hold the 2019 climate summit originally planned for Brazil.
Also Read: COP27: France, Spain join pledge to halt sales of petrol cars
Bolsonaro had appointed climate skeptics as ministers and saw deforestation in Brazil's Amazon rainforest spike to a 15-year high, Reuters reported. Moreover, according to the Associated Press, satellite images taken between January and June showed 4,000 square kilometers (1,500 square miles) of forest destroyed more than in any six month period in the seven years of record-keeping under the current methodology.
"The extent is four times the size of New York City," AP reported.
Meanwhile, it is noteworthy that Lula, who is due to start his third term in January, had reduced deforestation to near-record lows in his first presidency from 2003 to 2010.
Now, taking to the world stage, Lula said, "I'm here today to say that Brazil is ready to come back," Lula said, drawing cheers from the crowd of delegates at COP27 summit.
He emphasised that Brazil is back to resume its ties with the world and to once again fight hunger in the world. "To cooperate once again with the poorest countries – above all Africa – to cooperate with technology transfers to build a better future for our peoples," he was quoted as saying.
Check out our in-depth Market Coverage, Business News & get real-time Stock Market Updates on CNBC-TV18. Also, Watch our channels CNBC-TV18, CNBC Awaaz and CNBC Bajar Live on-the-go!