Vivek Chaand Sehgal wins Forbes India ‘Entrepreneur for the Year 2018’ Award. Take a look at the other winners

Vivek Chaand Sehgal, chairman of the Samvardhana Motherson Group, won  ‘Entrepreneur for the Year 2018’ and Wipro chairman Azim Premji bagged the 'Lifetime Achievement’ honour at The Forbes India Leadership Awards, which celebrated the who’s who at a high-profile ceremony in Mumbai on Thursday.

The awards, across nine categories, with an emphasis on excellence, innovation and transformational leadership, acknowledged the outstanding contribution of CEOs, entrepreneurs and business leaders who have built enterprises that have had a deep and enduring impact on the wider Indian society. The nominees and winners represented diverse backgrounds: startups and mid-sized firms to the more mature organisations operating at a global scale.

“The winners of the Forbes India Leadership Awards have found a balanced path to guide their organisations to success year after year. They command authority, as well as respect, and yet believe in flat organisational structures, decentralised decision-making and empowered teams. Change is something they embrace gracefully. The Forbes India Leadership Awards strives to recognise these changemakers and nation builders,” said Brian Carvalho, Editor, Forbes India.

The achievements of this year’s winners assume significance since they braved challenging economic conditions over the past year, to steer their organisations towards operational excellence.

Here is a list of winners of the Forbes India Leadership Awards 2018: 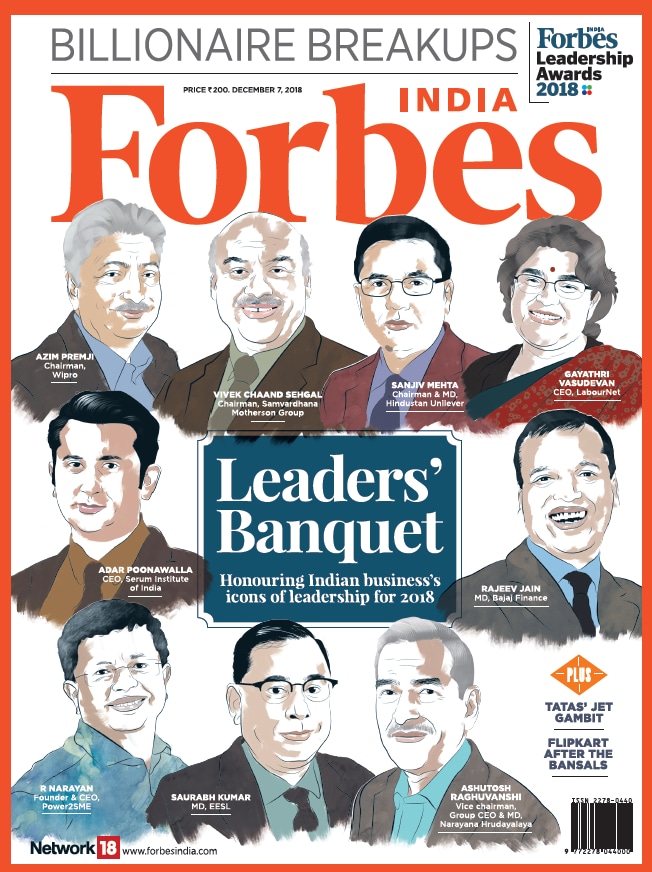 Vivek Chaand Sehgal, 62, is the chairman of the Samvardhana Motherson Group, which was set up in 1975. He founded the company with his mother. The company largely caters to the auto industry and deals with major clients such as BMW, Volkswagen, etc. Since 2002, Sehgal has made 21 acquisitions of which one includes the major acquisition of French auto parts maker Reydel Automotive Group in August this year.

Azim Premji, 73, is the chairman of IT major Wipro. He is an electrical engineer from Stanford and gave up his studies to look after the family's cooking oil business in 1966 after his father died. He expanded the business into the software sector. Premji is known to be among the most generous billionaires as he gave away 39 percent of his Wipro shares to charity.

Sanjiv Mehta is the chief executive officer of Hindustan Unilever Ltd. The 57-year-old  is a chartered accountant from The Institute of Chartered Accountants of India and has been with the company for over 26 years.  He has also completed the Advanced Management Program at Harvard Business School. Along with being a CEO of the major FMCG company, Mehta is also a director of the board of Indian School of Business and chairs FICCI’s FMCG committee and CII’s National Committee on MNCs.

R Narayan, the founder and chief executive officer of the startup Power2SME, had also founded Denave, India's largest technology powered sales enabling services firm and remains to be a board member of the company.  Power2SME was founded by the 24-year experienced cost accountant in April 2012. The firm is the first ‘Buying Club’ for the small and medium enterprises in India and focuses on their business enterprise segment with the aim of increasing their profits. The startup helps in reducing the SME's purchase prices and increasing productivity.

Adar Cyrus Poonawalla is the chief executive officer of Serum Institute of India, the company which was founded by his father in 1966. The 35-year-old entrepreneur expanded the company's operations across 140 countries and made it the third-largest vaccine producer in the world. He is an undergraduate in business management studies from the University of Westminster.

Gayathri Vasudevan is the chief executive officer of LabourNet Services India. The company aims to provide livelihoods for informal sector workers by providing vocational education and training and facilitates their financial inclusion and social security measures. A PhD holder in Development Economics and International Development from Delhi University, Vasudevan has also worked in the International Labour Organisation (ILO) as a project officer. At her eight-year stint with the ILO, she monitored the child labour policy, vocational training education and policy, education programmes, among others.

Rajeev Jain is the chief executive officer of Bajaj Finance, who has more than 20 years of experience in financial services across Indian and multinational companies. Before his stint with Bajaj Finance, he was the deputy CEO  of the American International Group (AIG) for more than a year. He holds a BCom degree from American College and a master's degree in business administration from TA Pai Management Institute.

Saurabh Kumar is the managing director of EESL, and has been leading the public company for more than five years. Kumar is an IIT graduate in electrical engineering and holds a master’s degree in public policy from National Graduate Institute of Policy Studies, Tokyo. He has also served the United Nations on handling environmental issues in the Asia-pacific region.

The process started almost six months ago, with extensive research on qualitative and quantitative parameters, said a statement by Forbes India. The long-list of names for each category was whittled down by August and was narrowed down to a strong set of three to five nominees for each category, it said.

In September, a high-powered jury headed by  Harsh Mariwala, chairman of Marico Ltd, examined the nominations and came up with the set of winners. The other eminent members of the jury were Saurabh Mukherjea, Founder, Marcellus Investment Managers; Sanjay Nayar, CEO, KKR India; Ashu Suyash, MD and CEO, Crisil; Ronnie Screwvala, Co-Founder of UpGrad; and Noshir Kaka, Senior Partner, McKinsey & Company India. Together, they bring years of experience in the corporate sector to the jury.

KPMG, Forbes India’s knowledge partner for the event, helped with the number crunching so essential for the process.

About The Awards Forbes India magazine seeks to play a catalytic role in spotting and recognising outstanding entrepreneurs. Instituting the Forbes India Leadership Awards is one big step in that direction, said the statement. In many ways, the themes behind each award category reflect the editorial agenda of the magazine, Forbes India said. Transformational leadership, which the 2018 edition of the Forbes India Leadership Awards seeks to honour, includes individuals and organisations who have achieved success through their vision, foresight, and business ethics. They have put their enterprises on a new growth trajectory by taking bold decisions and creating value for all stakeholders. They are individuals and organisations who believe in creating an environment where leadership can thrive; they help create a new generation of leaders.Disclosure: Network18, the parent company of CNBCTV18.com and Forbes India, is controlled by Independent Media Trust, of which Reliance Industries is the sole beneficiary.
Tags Adar Cyrus Poonawalla Azim Premji Bajaj Finance EESL Entrepreneurship Forbes India Forbes India Leadership Awards Gayathri Vasudevan Rajeev Jain Sanjiv Mehta Saurabh Kumar Vivek Chaand Sehgal Wipro
Published : November 22, 2018 07:30 PM IST