This American has transformed a backward community in Rishikesh, one child at a time

Updated : May 16, 2018 04:46 PM IST
The students who reach class 12 are the best of the best. Many win state-level sports trophies, which adorn Shahla’s office, and several score above 95% in final exams.
Today, her English-medium school has about 430 students on its rolls, from kindergarten to class 10 and follows the Uttarakhand board.

Dressed in all-white — from her dupatta to shoes — Shahla Ettefagh stands out amongst the sea of colour at her school, Mother Miracle, where the walls are painted in bright hues and students have been given uniforms in four different colours to indicate their ‘houses’.

“It encourages team spirit and fosters competition,” explains the petite powerhouse of energy as she takes you on a tour of the Rishikesh school, which took 10 years to reach its current form.. Shahla (in white, back row) with Mala Rajya Laxmi Shah, Maharani of Tehri Garhwal and Member of Parliament, (in yellow) with students and staff at Mother Miracle School’s annual day in April this year.

In all this time, with her American work ethic, never-say-die conviction and tough love, she has not only transformed the most underprivileged children from Rishikesh’s shanty areas into academic toppers and sports champions, she has also affected a remarkable change in the social and economic fabric of this impoverished neighbourhood, where caste differences once eroded human rights and ate into the holy hill town’s development.

Shahla’s personal aura and magnetic personality leave you somewhat awestruck, even as she goes about in her firmly no-nonsense manner. Born in Iran in the 1950s to a wealthy family, Shahla has lived an eventful life. A qualified architect, her first marriage ended just as the 1979 Iran Revolution took place, and she migrated with her son and family to America. The art room at the school.

There, they started their business from scratch and once again reached the pinnacle of wealth. Shahla would go skiing in Switzerland, shopping in Paris, dining in London. Her three-story home in San Francisco, where she frequently hosted parties, had four walk-in closets full of designer clothes and shoes, many with the tags still attached because she never had time to wear them, she says.

But her soul was not at peace.

A trip to India in the winter of 1995 changed everything. Travelling via road with her friends from Varanasi to Bihar, she was initially disgusted by the sight of utter poverty and disease, the flies, dust, the blaring of car horns, and smells from heaps of rotting garbage that went on for miles. She complained non-stop, she recalls, smiling wryly.

The group stopped for tea at a roadside restaurant. Shahla sat gingerly on a chair, dressed in a black Eddie Bauer down ski suit with a matching hat and gloves. Suddenly, a skinny three-year-old girl entered, her dress in tatters, her feet bare.

The child came up to Shahla and pointed at her tea. Shahla handed it over, but instead of drinking it, the child just held it in her palms for warmth. Then she sat on the floor and snuggled up to Shahla’s legs to share her body heat.

“My motherly instinct kicked in as I felt her shivering, and I hugged her tiny, naked body in my arms,” Shahla narrates. “That was it. With my eyes closed and my arms around the girl, scenes from my life flashed all around me. What was I doing with all my privileges?” 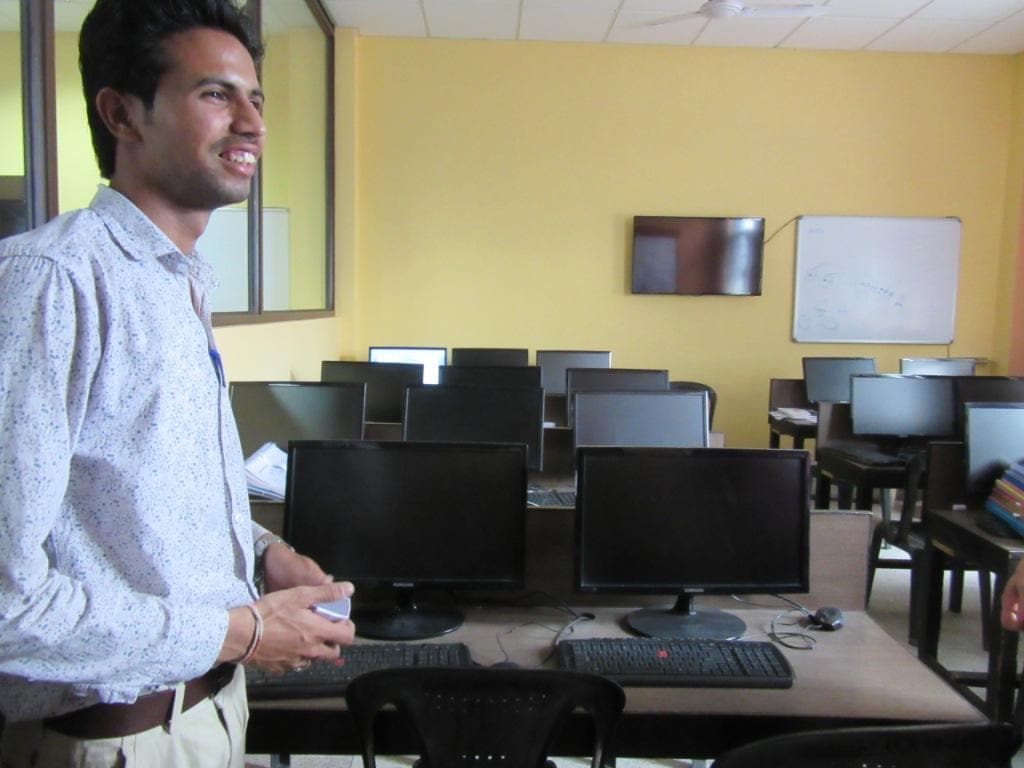 For the rest of the trip, not one complaint escaped Shahla’s lips. At a temple in Assam, as her friends clicked photos, she vowed to return to India and do something about its poverty. Back in the US, she became a changed woman. She stopped drinking alcohol, turned vegetarian, began doing yoga and meditation, and adopted a simple lifestyle.

She attended Buddhist lectures and spiritual seminars almost every second day. She also sold her home and her interior art business. By this time, her son had secured a good job and was independent.

In 2002, Shahla moved to Rishikesh, and began to live in a small apartment overlooking the Ganges. The next few years were an uphill climb, as she tried to set up a school for the poor. She kept facing roadblocks — from fussy government officials, from cheats who ran away with her money, and from nature, as the school she built would get flooded during the rains.

Yet, Shahla steeled herself and pushed on.

She offered free books, food and uniforms using her own funds. She taught English, computers and art. Students joined her year after year, regardless of her logistical problems. Finally, in 2016, the former architect constructed a flood-free school spread across over 25,000 sq ft in Shisham Jhari, one of the most impoverished localities in Rishikesh.

She opened her doors to the poorest of the poor. Soon, due to a space crunch, she could choose only the brightest children from the throngs of thousands who lined up every year for admission.

Realising she could not build a sustainable model of education from her personal funds alone, Shahla returned to the US year after year seeking donations from friends. “My family laughs at me, but I have no shame in asking people for $40 dollars for my children,” she says proudly. She also conducted collection drives for old books and toys.

Today, her English-medium school has about 430 students on its rolls, from kindergarten to class 10 (they are adding classes 11 and 12 next year) and follows the Uttarakhand board. All children get uniforms and NCERT books; girls get sanitary napkins. 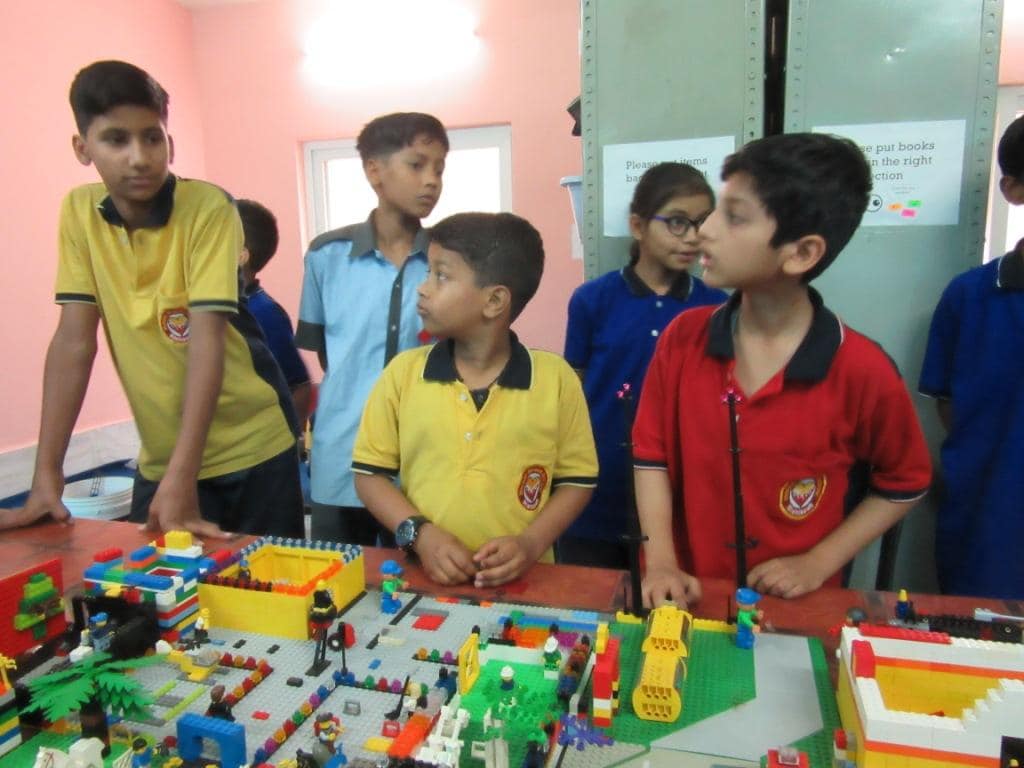 Students display a ‘township’ made from a donated bag of Lego.

The school offers a volleyball-cum-badminton court, basketball loop, hockey field, table tennis, tennis, art classes, computers, dance classes, science labs, clinic, a large canteen where kids get two balanced meals where they can eat all they want (“It’s often the only food they get all day”), WiFi, and modern, sparkling clean toilets that would put most government schools to shame.

Corporal punishment is banned. Every child is taught to meditate and send “healing energy to the sick people in the world”. The school facilities are also used after school hours for vocational programmes for the local community, and a French café caters to tourists — all revenue is pumped back into the school’s running costs.

Discipline is uncompromising: shoes must be lined up in parallel outside the canteen during lunch time; “Awry shoes will be confiscated,” the kids are warned. Toys must be put back on shelves after playing, mats must be rolled away, and lab equipment cleared. The cook and kitchen staff must be thanked with a bow after meals. Bullies are expelled.

Shahla is painfully aware that the kids’ harsh home lives are in stark contrast with the loving school environment. Parents are warned against making the children, especially girls, do housework after school or hitting them. The teachers deliberately give kids extra homework, so that they have no time for anything else at home.

“The parents are mostly illiterate construction workers or daily wagers. They know this school is the only chance their children will ever get to break out of poverty,” Shahla says in her blunt way. “They will do anything to keep them here.”

The students who reach class 12 are the best of the best. Many win state-level sports trophies, which adorn Shahla’s office, and several score above 95% in final exams. Every child speaks English well, says “good morning” politely to visitors, walks with quiet confidence, and plays with the school Labrador, Scooby.

Much emphasis is put on computers and programming. “There are only three ways for you to rise above caste discrimination,” Shahla tutors her students: “Computers, computers, computers.” The school already owns 48 desktops; 50 more are on the way. Children start learning coding from class 6 onwards; by class 12, they can design and run a complete website.

Over 360 children in the school have individual sponsors who will fund their cost of education all the way till they complete college ($480 per year per child).

Oregon-residents Johane and Paul Van Camp, for instance, both retired medical professionals, are old-time sponsors of Utkarsh from class 10 who wants to join the Armed Forces, and Unnati from class 8 who wants to be a doctor. “So Utkarsh won’t need too many funds for his higher education,” jokes Paul grinning at the teenage boy who smiles back smartly. The couple are on a visit to Rishikesh this year to attend the school’s annual-day event.

The event, which sees over 1500 visitors, is the most celebrated date on the school’s calendar. Bollywood choreographer Uma Shankar is flown in with his troupe to teach the children elaborate dance performances. Special costumes are designed, and the Maharaja and Maharani of Tehri Garhwal are invited as chief guests.

The symbolism is stunning: here are the most revered members of upper-caste Hindu society, in a holy Hindu town, stepping into a former slum colony where only the backward castes live, to support a school run by a Buddhist Iranian-American.

It takes a fireball of love like Shahla to achieve that.

From day one, Shahla put an end to all caste snobbery among the school’s 42 staffers: when she heard the cooks pooh-poohing about eating at the same table as the toilet cleaners, Shahla and her (Brahmin) manager went and sat at the table along with them. “Everyone here is a professional, no matter what work they do. If you a have a problem dining with your colleagues, you can leave,” she said sternly. That put an end to that.

Older students vow to sponsor the next generation. Vikrant Sharma, for instance, who is now studying to be a neurosurgeon from Drake University thanks to his American sponsors and who considers Shahla his second mother, will support his school as soon as he lands a job. Kusum Bijalwan, 24, who completed her MSc in Zoology, is back at the school working with Shahla as her personal assistant.

Many other students return — one works as the accountant — and an alumni association is in the offing. “I used to be worried about who will run the school after I am gone,” says Shahla, who has withstood government pressure to make it a private school, and has registered it under a non-profit trust. “But now I can die in peace.”

This story was first published in the May 2018 issue of  eShe magazine.
Tags Rishikesh unwind