From exploring new corners of the world to jumping hurdles to leaping fences, passion is what enables us to take a chance on what reverberates in our soul. This month, we bring you an inspiring journey of two supremely talented women who honoured their creativity and passion for art while pursuing a medical career. Dr Sharanbir Kaur, fondly called Sharan by friends and family, feels lucky to be born in the 1990s when “there was more to life than technology”. With both parents working, she was rooted with a healthy upbringing and a more independent and mature outlook towards life. “My childhood helped strengthen my identity as a person. I learnt to be an optimist from early on,” says the dentist, whose passion for illustration has earned her almost 50,000 fans on Instagram today.

She spent significant time building her career in dentistry. An introvert by nature, Sharan feels that mapping a career path for herself taught her a lot about success and failure. “The road was uneven, and I went through several bad patches. It was during one such bad phase that I found art.” Sharan paints using acrylics, watercolours and oils to make illustrations and customise art on order.

The beauty of art lies in its ability to trigger varied emotions in people. For Sharan, it was a liberating experience. “Art helped me unwind and de-stress even on my worst days, and it gave a deeper meaning to my existence.”

About whether art as a creative form has become essential now, she further adds, “Today, people have become more isolated than ever. Our virtual connections are getting stronger, and real-life ones more distant. So, in times when you are frazzled, reassurance even in the form of a random post online gives you hope. It can make all the difference.”

Sharan is the founder of @the_blue_frenchhorn, an Instagram account where she posts all her illustrations and works of art. She happily calls it her positive, happy place where there is hope, joy, sunshine and rainbows. “I sometimes get messages when a particular post of mine made a reader feel better, or made them try again just when they were thinking of quitting. It could be music, it could be art, it could be a good book, but in this age we all need a soft cushion to fall back on our gray days,” says the 31-year-old. 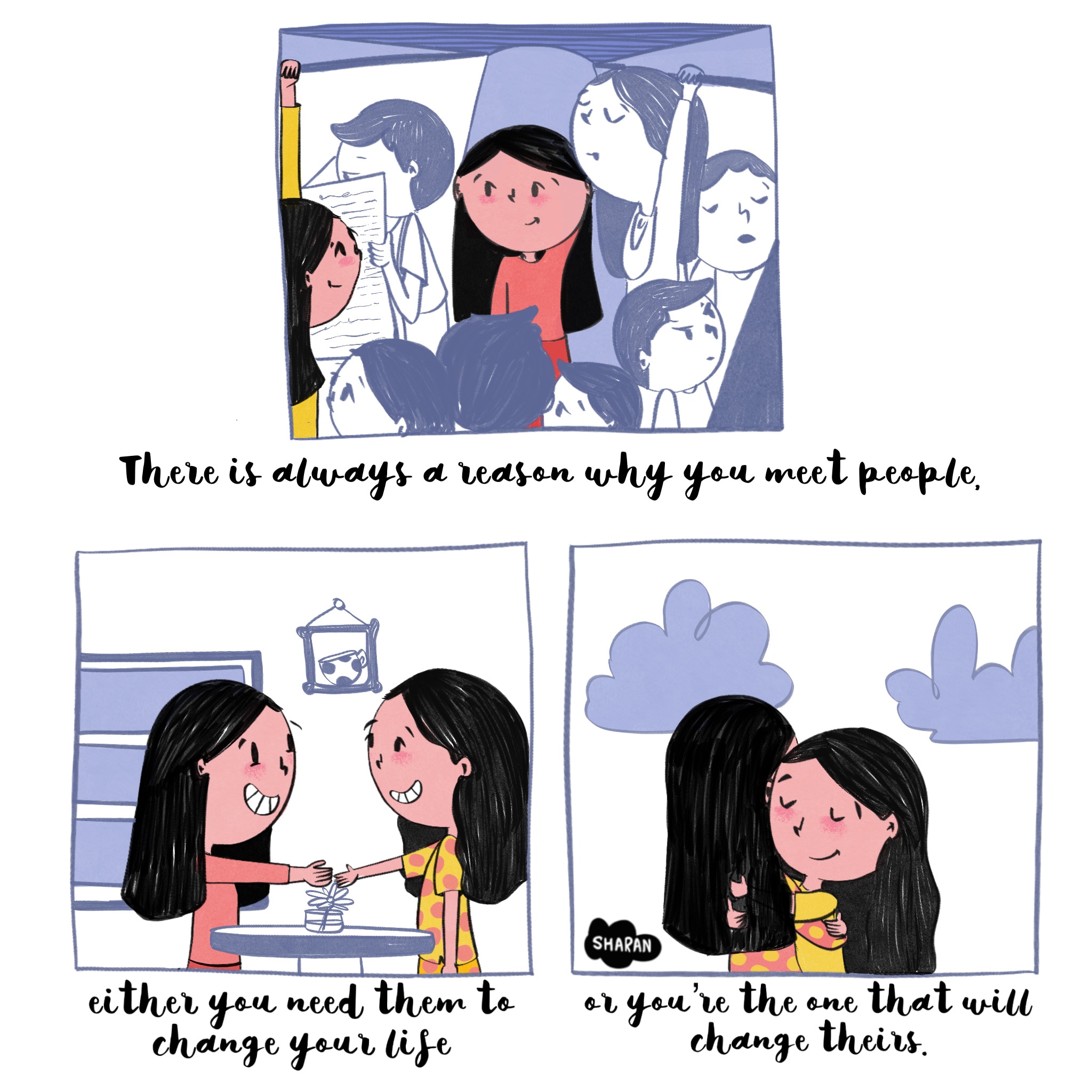 We are all creative in our own right, but what is it that Sharan enjoys the most about her creative side? “I love the artistic liberty it gives me. I can be as expressive as a person and artist as I like,” says Sharan who feels art has gifted a comfortable space to her thoughts.

She also admires the fluidity that comes with it. “I love the fact that there are no rules, no one method, no one track that you need to follow while drawing.”

Sharan spends the first part of her day at her clinic and reserves the latter half for art. “Which includes much daydreaming, brainstorming through ideas, scrolling through random stuff,” she quips. Born with a stubborn heart, she has never shied away from pursuing what she loves and credits her family and friends for their unflinching support.

As we take steps towards personal fulfillment, we learn some incredible lessons that give our life its deepest significance. As the Delhi-based dentist says, “People need to realise how beautiful life is and be grateful for that.” From early on, Jaya Gupta was brought up in the company of boys. Despite the extended family being conservative, her parents never let her miss any opportunity. She could pursue whatever her heart demanded. Driven by strength, she travelled miles – from Delhi to Manipal, University of Madison at Wisconsin, and finally Ahmedabad – to make a career in medical science at a young age.

“It was an uncomfortable decision because no girl in my family had gone that far. But my parents stood by me and gave me the confidence to march ahead,” she recalls.

Her parents’ firstborn, Jaya calls herself a survivor. “Being a survivor is a trait you acquire with time. It should be seen as an amalgamation of a strong upbringing, belief systems that our parents root in us and the impact of people we encounter,” says the dermatologist, who has a flourishing practice in south Delhi.

Jaya was an intelligent and creative child. After completing her MBBS, she obtained her Master’s in clinical dermatology though it was not her first preference. “A sudden boom in the aesthetics and the cosmetics industry in those years compelled me to opt for it. And, my sincere interest in art and photography propelled me further.” She believes that there is nothing better than a syncretic fusion of passion and work. “Like in painting, we have rules of proportions – what would look beautiful and strive to the eye – similarly, as an aesthetician, we work on making any facial feature look more appealing to the eye. It dawned on me soon how I could use my creativity at work,” explains the 32-year-old.

Apart from making a living doing what she enjoys, Jaya also urges everyone to take up art. She calls it a reservoir of happiness. She shares how art has been an integral part of her life ever since she suffered from personal and professional struggles: “Art helped me heal. The past 10 years have not been easy. I went through several meltdowns, and it was during that time that my passion for art manifested. I could see the negativity in me transforming into beautiful creative expressions.” Of course her medical profession also brings her joy in its own way: “I love helping people. It fills me up.”

Before spending an entire day in patient care, Jaya religiously dedicates her mornings to creative pursuits. An early riser, she also enjoys spending time with her parents. Is there any secret to navigate through this complex world? She says, “Be passionate. Find out your strengths and start building a life around them.”