The seventh episode of Amazon's Lord of the Rings isn't as elevated or startlingly dramatic as the previous one. The Eye, however, is an engrossing hour that lays the groundwork for a potentially epic season 1 conclusion next week, with events in the series' three primary storylines apparently drawing to a crescendo. The following contains spoilers for The Lord of the Rings: The Rings of Power episode 7.

The latest Rings of Power episode is titled "The Eye," which instantly brings to mind the Eye of Sauron. However, we are yet to see him or his eye in the series so far.

Although 'The Eye,' as an afterthought, hints at Miriel's unexpected medical condition or even Galadriel waking up after being knocked unconscious by the volcanic explosion that ended the previous episode. It can perhaps also allude to Durin finally opening his eyes and acknowledging his obligation to his friend.
The seventh episode of Amazon's Lord of the Rings isn't as elevated or startlingly dramatic as the previous one. The Eye, however, is an engrossing hour that lays the groundwork for a potentially epic season 1 conclusion next week, with events in the series' three primary storylines apparently drawing to a crescendo. Image: Amazon Prime
Also read: Rings of Power Episode 6 Review: ‘Udûn’ unleashes fire and fury in the show's best episode
The episode does little to reveal Sauron's actual identity and leaves it hanging, but perhaps it will become clear in the next episode.
Southland turned to ashes
The episode starts with the aftermath of last week's Pompeii-level explosion, which blanketed the region in ash, making for an eerie and dread-inducing opener. This is followed by a slower-paced entry of the characters who are making sense of this major catastrophe. We see a bewildered and appalled Galadriel taking in the horrors surrounding her after Mount Doom's explosion.
The terrain is littered with the burnt corpses of Númenorean soldiers and Southland’s civilians, as well as wrecked dwellings and debris. Galadriel's persistent drive and tenacity in tracking down Sauron partly fueled it, and it will ignite a sense of resentment inside Elendil once he believes his son Isildur is dead. 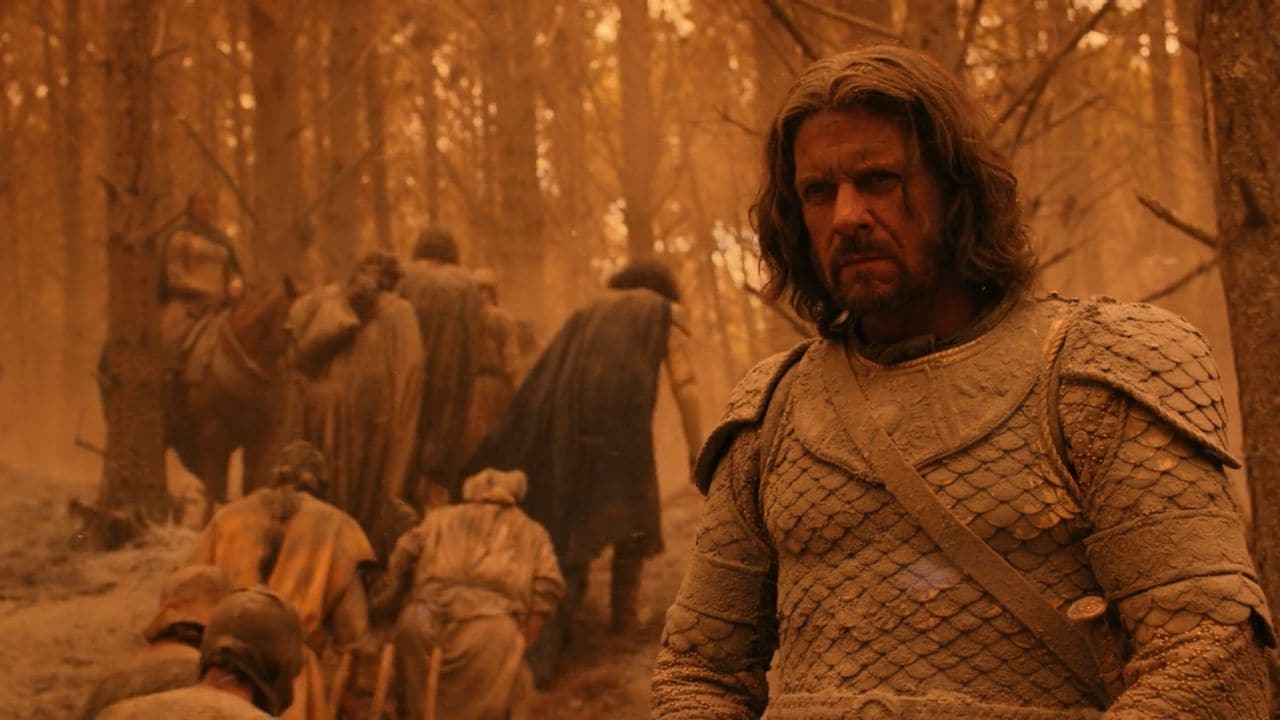 Image: Amazon Prime
All of our favourite heroes are experiencing tremendous, personal loss. Galadriel runs into a horrified Theo and leads him through the mayhem boiling around them. A reunion between Isildur and Queen Regent Míriel takes place, and they labour together to save Valandil from beneath a crumbled wall, which is immediately interrupted by the discovery that Ontamo, Isildur and Valandil's friend, who is buried under rubbles, dead.
The three of them attempt to rescue other citizens trapped in a neighbouring burning building, but at a heavy price. Embers fall down Míriel's face, blinding her and stealing her eyes, meanwhile, Isildur appears to be smothered as the roof crumbles over him.
Our courageous tiny friends
Mount Doom's desolation becomes even more apparent with a sudden return to the hobbits' journey after a one-episode hiatus, as the Harfoots would soon discover their own horrors on their lush and verdant adventure.
Our tiny friends wind up close enough to the blast radius for a few pyroclasts to crash nearby, melting many trees. Except for Sadoc, the group's leader, everyone is perplexed by this new horror that has befallen them.
According to stories told by Sadoc's old gran, some mountains in the south have the ability to spit fire rocks before going to sleep for hundreds of years, a hibernation that only ends when "a new evil" rises.
Nori worries if the stranger is to blame for the new evil, casting doubt on her decision to assist him. The Stranger rubs his hands over the trunk of a charred tree, whispering lines which appear to stir the wind, while Harfoots pluck black and lifeless fruits from the scorched branches of the trees. Image: Amazon Prime
His murmuring rouses the tree; its scorched bark splits apart, exposing fresh life beneath, and the fruits brighten once again. When the magic gets too powerful to manage, a massive trunk breaks and falls on top of Nori, trapping her underneath it. The Stranger is hurt, and Nori becomes skeptical. This relationship is really not going to get better any time soon.
A flower grows from the tree’s trunk.
Also read: The Rings of Power Episode 5 Review: 'Not all who wander are lost'
A decision is made to break ways with the Meteor Man. It's heartbreaking, especially when Sadoc and Nori give him the star chart and an apple for the lone voyage.
But hope endures. Nori wakes the next morning to discover the Stranger's spell has indeed come to fruition, with the Harfoots picking apples and other fruits and vegetables in preparation for their next journey.
However, Poppy notices a large footprint in the riverbed while fetching some water. The Harfoots later discover the Mystics, a team of three comprised of the Dweller, the Nomad, and the Ascetic, who are searching for the Stranger's whereabouts. While Nori tries to distract them by giving the wrong directions, the Mystics burn down their whole dwelling and carts. 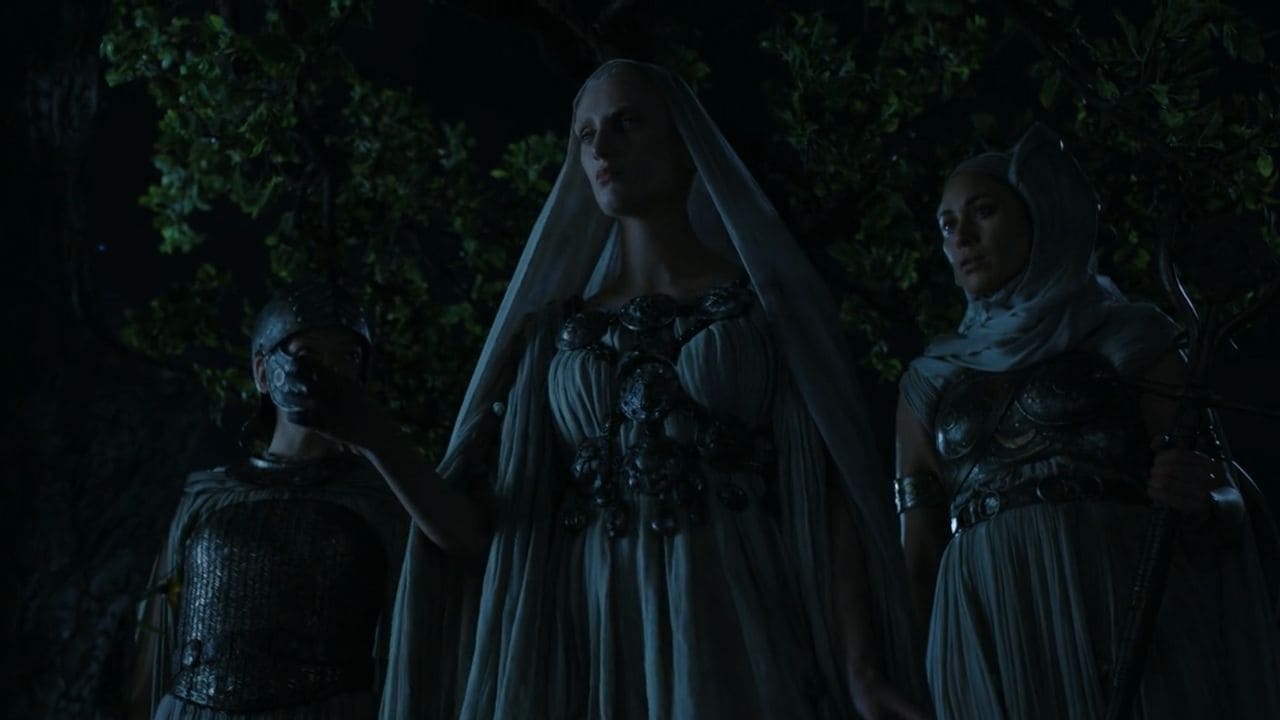 Image: Amazon Prime
Nori decides to embark on her own journey to locate the Stranger and warn him about the Mystics, but she will not be alone. Poppy and, in a kind act, Nori's mother Goldie decides to accompany her. Sadoc, the only one with off-trail experience, chooses to join the squad as well.
Númenoreans shall return
Meanwhile, Galadriel and Theo's interaction allows The Rings of Power to display how far the fiery elf has come since her episode one voyage. She persuades an angry and impulsive Theo not to embark on a deadly journey to defend his homeland. 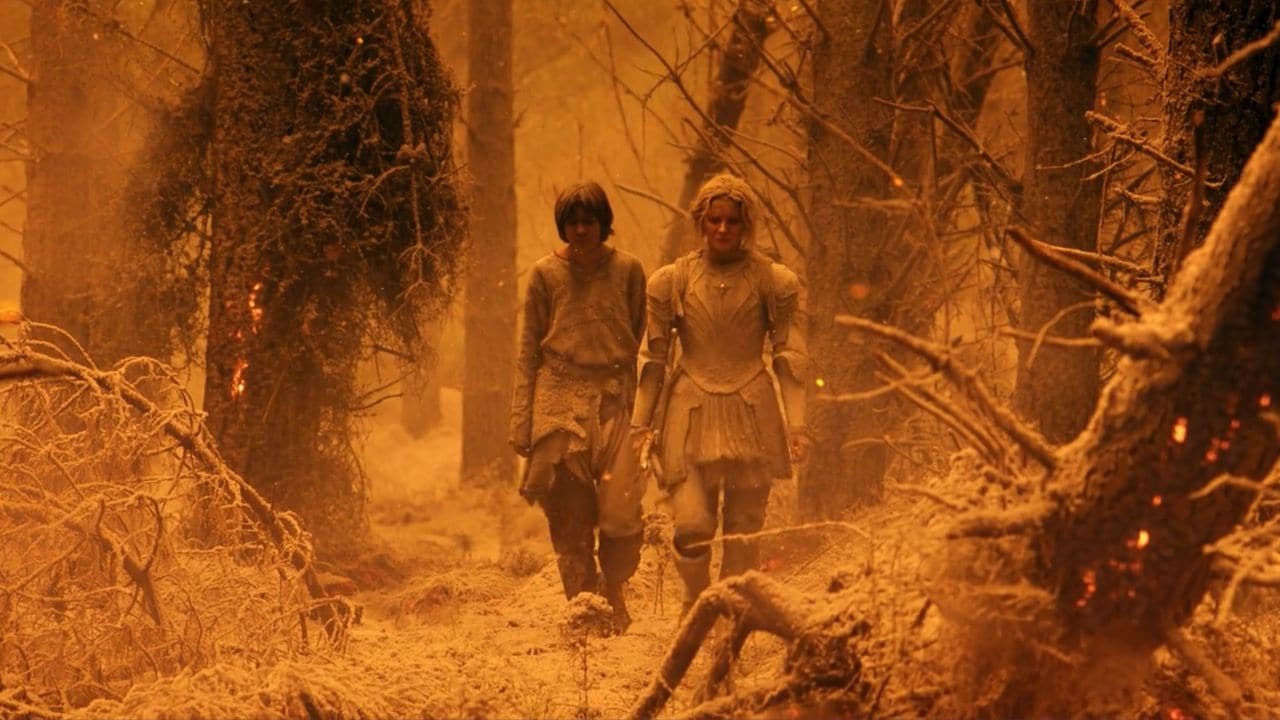 Image: Amazon Prime
It's a moment in which Theo serves as a reflection of the naive Galadriel we met in the series debut, and it showcases her character growth.
Galadriel drops a massive bomb on casual Lord of the Rings fans during this intimate conversation between the two. She not only lost her brother Finrod to the orcs but also her husband Celeborn.
When the duo arrives at the Númenorean camp, where Theo reunites with Bronwyn and Arondir, a guilt-ridden Galadriel rejoins with a heartbroken Elendil and a blindfolded Míriel. Image: Amazon Prime
Míriel pledges to her that Númenor will return to confront Sauron's soldiers and avenge the dead. Elendil, still reeling from Isildur's death, harbors resentment toward his queen and Galadriel as a result of her decision.
In the second half of the episode, we meet Halbrand, who escaped Mount Doom's catastrophe. Galadriel quickly discovers that he has been severely injured, and only elven medicine can heal his wounds. Image: Amazon Prime
Despite his inability to travel, Galadriel chooses to carry him to Lindon, where he can be healed, and where she will very probably arouse the wrath of High King Gil-galad for defying his order.
Trouble at Khazad-dûm
Elrond and Durin fail to persuade Durin's father, the king of Khazad-dûm to revive the mithril mines in order to extract the gleaming ore to save the elves. Image: Amazon Prime
A gloomy Durin conveys the terrible message to Elrond, establishing a truly moving scene in which the pair's expressions convey more than most words could. Distraught, Durin tosses the piece of mithril he gave Elrond towards the withering Lindon leaf with which the couple attempted to persuade King Durin.
The mithril instantly relieves the leaf of its malady. Durin and Disa, stunned, decide to help Elrond, even if it goes against King Durin's intentions. The duo conspire and secretly dig for more mithril, finally ending up in a huge mine. Image: Amazon Prime
The good news lasts for a fleeting moment as it is instantly eclipsed by the King's arrival at the mines and seeing them conspiring against him. He immediately banishes Elrond from the Dwarvan realms.
Prince Durin laments to his wife Disa, who tells him that they will one day rule Khazad-dûm. King Durin orders his men to plug the opening his son dug in the mithril mines, but not before casting the Lindon leaf into the chasm below. However, that deed appears to awaken the Balrog from its slumber.