All of the preceding episodes' groundwork pays off in Episode 6, which serves up an incredibly remarkable hour of visual spectacle reminiscent of The Lord of the Rings: The Two Towers and Game of Thrones' Helm's Deep.

The sixth instalment of The Rings of Power unleashes fire and fury on the people of Middle Earth as it sends them straight to their graves. It is appropriately titled "Udûn," a menacing Sindarin Elvish word that means 'Hell' and appears throughout Tolkien's legendarium.

The Rings of Power felt a touch sluggish at times as it gave extensive exposition to establish its characters, the status of the universe, and what's at play. But this episode will satisfy anyone who has been waiting for the series to ramp up the pace, with an hour-long battle sequence interspersed with a few brief interactions between the characters.
All of the preceding episodes' groundwork pays off in Episode 6, which serves up an incredibly remarkable hour of visual spectacle reminiscent of The Lord of the Rings: The Two Towers and Game of Thrones' Helm's Deep.
Adar and the Orcs assault Southlanders (Image: Amazon Prime)
In the last episode, we left middle earth with the Southlanders at Ostirith, waiting for the Orcs to attack. When we rejoin the party, Adar is standing in front of a sea of fire, giving his speech to a gathering of Orcs carrying torches ablaze in the darkness, as a bloodthirsty Waldreg (played by Geoff Morrell) stands in the front row.
Also read: The Rings of Power Episode 5 Review: 'Not all who wander are lost'
"New life. In defiance of death," Adar exclaims as he plants some seeds before turning to his legion of Orcs and campaigning for their liberation. He and his battalion march for Ostirith, the tower where Bronwyn, Arondir, and their people have sought refuge. The army lay siege on the tower but only to find it deserted.
Arondir is hiding in the tower, but Adar quickly detects him because of his peculiar Elven stench. The Elf pulls the tower down on top of the Orc army with a few well-placed arrows, allowing the rest of the Southlanders enough time to prepare for their next trap.
The episode's main action begins when Bronwyn and Arondir lead the retreat from the tower and begin preparing for the counter-offensive, which is filled with brilliance and powerful moments.
The traps set by the people of the Southlands for the Orcs aid them in achieving a short-lived victory since it is discovered that Adar primarily sent in humans disguised as Orcs in the first wave.
While Waldreg is the episode's main villain and a real traitor, the majority of those who allied with the Orcs were most likely frightened and afraid. In a violent sequence, the villagers end up killing their own. This scene also underscores Adar's ethos that an Orcs' life is just as valuable as a human's.
Second Wave
Our heroes come to a terrifying revelation - mixed in with the Orcs were their people, those who had naively embraced Adar's offering of peace in consideration of pledging allegiance. The Southlanders aren't the only ones who can devise a trap, as arrows begin to descend from the sky, two of which strike Bronwyn. (Image: Amazon Prime)
It is the tensest situation one of the heroes has ever been in, and seeing Bronwyn pierced by two arrows is bound to worry some viewers. Arondir rushes her into a temporary fortification where the group's civilians and children have been sheltering, but not before a barrage of arrows kills several of his companions.
This is followed by the series' most brutal sequence yet. Bronwyn barely survived despite having her wounds excruciatingly cauterised. Adar burst into the stronghold and demanded to know where the hilt was (which belonged to none other than Sauron himself).
Arondir refuses to reveal to him that it's wrapped in fabric and concealed beneath the floorboards, even as Adar's forces start killing prisoners. In a shocking execution, Adar demonstrates how little his Orcs care for human life. Theo does not divulge the location of the blade until they shift their focus to Bronwyn.
Númenóreans save the day
Southlanders are on the verge of defeat when the cavalry of Númenór rides to their aid and saves the day. The moment is reminiscent of the arrival of the Riders of Rohan in The Return of the King. 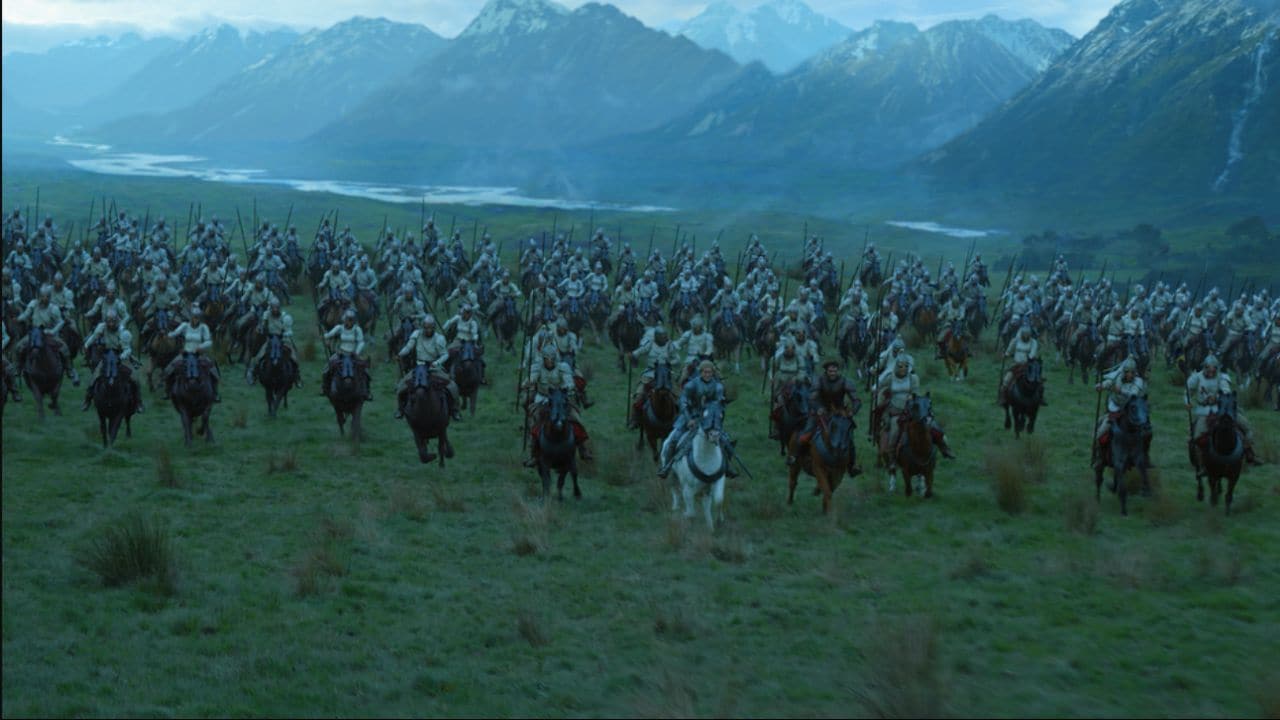 (Image: Amazon Prime)
Throughout the episode, the battle sequences are wonderfully choreographed and executed. "Udûn" is packed with numerous horse sequences and excellent riding shots, most notably Galadriel's amazing saddle acrobatics and her chase scene with Adar.
However, Adar, expecting defeat, delivers the hilt he's finally secured to his sidekick Waldreg before attempting to flee, only to be pursued by Galadriel and Halbrand. The duo retrieve a fake sword from Adar (he hands the real hilt to Waldreg).
Halbrand nearly kills him after questioning whether Adar recognises him, to which Adar answers that he does not. But Galadriel needs him alive for interrogation. His remaining Orcs are either slain or captured.
Galadriel interrogates Adar, "Morgoth was said to have tortured elves into new beings, the sons of the dark, the first Orcs." Adar prefers to refer to his people as "Uruk."
As Galadriel scrutinises him about the actual location of his master, Sauron, Adar claims, "After Morgoth’s defeat, the one you call Sauron devoted himself to healing Middle-earth." Flashes of the stronghold in the snow, strewn with Orc skeletons. "For my part, I sacrificed enough of my children for his aspirations. I split him open. I killed Sauron."
In The Silmarillion, Tolkien says, "loathed the Master whom they served in fear, the maker only of their misery." We get to know Adar's story - he is filled with fury, and his aims aren't to return the Orcs to Sauron and enslave his people again but to offer them the dignity of other sentient creatures.
Galadriel is unmoved by his statement and crouches in front of him, vowing to slay every Orc with deadly calm. "Before I drive my dagger into your poisoned heart, I will whisper in your piked ear that all your offspring are dead and the scourge of your kind ends with you."
But Adar is unconcerned. "Perhaps your search for Morgoth’s successor should have ended in your own mirror," he taunts.
Only Halbrand's presence prevents Galadriel from executing him, resulting in a small band of blood on his throat. Adar inquires about Halbrand identity, but who does not respond. Who exactly is he?
All hail King Halbrand of the Southlands!
The magnificent victory inspires an impromptu banquet in the heart of the bereaved town, which acts as a vehicle for many distinct Númenórean narratives. (Image: Amazon Prime)
Galadriel and Halbrand have a touching moment by the river, as they display some trust and emotional vulnerability. Elendil and Isildur, the father-son duo, also bond a little as they process their grief over their drowned wife and mother and hug one another in an emotionally charged scene.
Arondir leads a grateful Bronwyn to Muriel, who presents her to Lord Halbrand. Upon realising that he is the one true king of their people, she hails him as "the true king of the Southlands."
Arondir notices Theo reclining in solitary, looking both guilty and bereft of the power the hilt gave him. Arondir trusting him and trying to do the right thing, gives Theo the wrapped hilt to deliver to the Númenóreans and releases himself from its grip. He unwraps the cloth to reveal a plain axe.
Mount Doom erupts
Waldreg sneaks out with the unusual blade and makes his way to the watchtower while the town celebrates its triumph. He uses the blade to activate a schism, which breaks open the dam, allowing the water to flow freely. The water flows through the underground tunnels made by Adar's Orcs, descending into the volcanic Amon Amarth.
The water pours into a tunnel of seething red lava at the mountain's heart, unleashing a fresh torrent of fire and smoke from the hilltop. Fireballs soar through the air and smash into the hamlet, erupting in blasts of red and black during the all-too-brief celebration.
Elendil rushes after the queen; Isildur summons Berek; and Ontamo dashes into the smoke. However, one figure does not move. Galadriel. 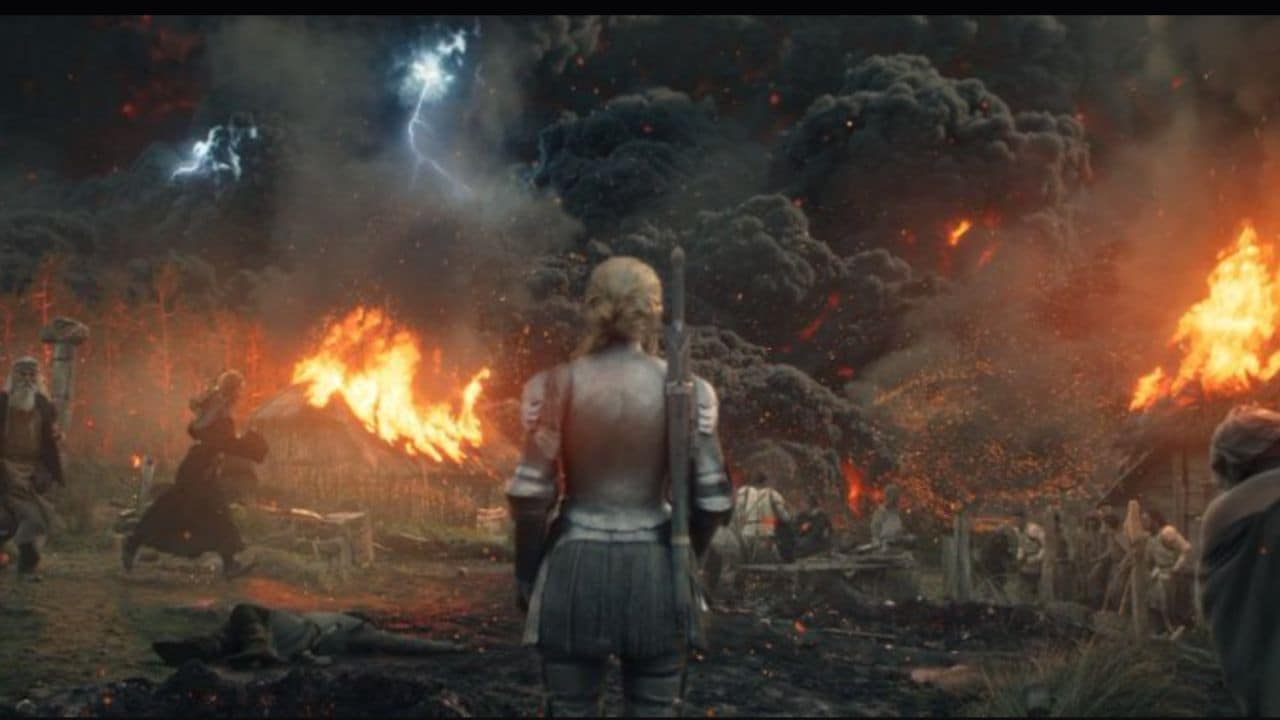 (Image: Amazon Prime)
She stands amid the fires and destruction, watching as a wave of black smoke creeps down the mountain and across the meadow.
The volcano, which most of us know as Mount Doom, covers the entire area in fire and smoke, resulting in the creation of Mordor. This makes "Udûn" the best episode in the series thus far, concluding with what may be The Rings of Power's most potent cliffhanger as it ends with Galadriel being consumed by the black fume. 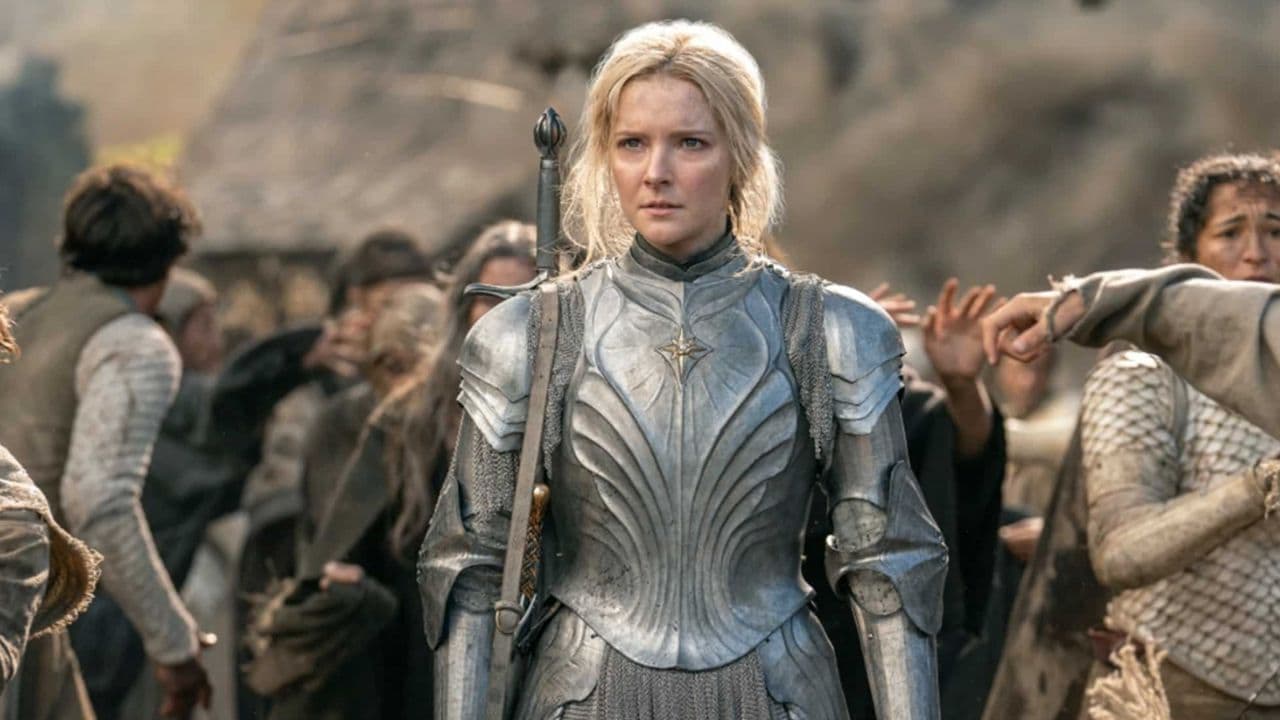 (Image: Amazon Prime)
Adar, as played by Joseph Mawle, is a compelling villain, and Mawle's portrayal is outstanding, delivering one of the best performances in this episode. Adar is fed up with being a lieutenant to a preoccupied boss who sees Orcs as throwaway means to further his agenda at best and has lately used them as test subjects for his experiments.
The Rings of Power, like rival fantasy dramas Game of Thrones and its forerunner The House of the Dragon, does a fantastic job of depicting the moral ambiguities of its characters. Due to this reckoning, Adar, Sauron, and Galadriel all have distinct perspectives on the Orcs.
A terrible entity created them, but now that they possess sentiments and belief systems of their own, Galadriel's murderous promise feels downright horrific.
Adar's comparison of Galadriel to Sauron is a subtle hint of the evil she conjures when Frodo offers her the One Ring in the Lord of the Rings. She could be Sauron's replacement since she has the solitary determination to rebuild Middle-earth in her image, much like Sauron.
She may commit immense harm in resisting evil, with the consequences just as disastrous.
Also read: The Rings of Power mid-season recap: Visually staggering cinematic return to Middle-Earth
Check out our in-depth Market Coverage, Business News & get real-time Stock Market Updates on CNBC-TV18. Also, Watch our channels CNBC-TV18, CNBC Awaaz and CNBC Bajar Live on-the-go!