Bhool Bhulaiyaa 2 movie review: Tabu lords over everyone else in this Kartik Aaryan-Kiara Advani film

Bhool Bhulaiyaa 2 movie review: Tabu lords over everyone else in this Kartik Aaryan-Kiara Advani film 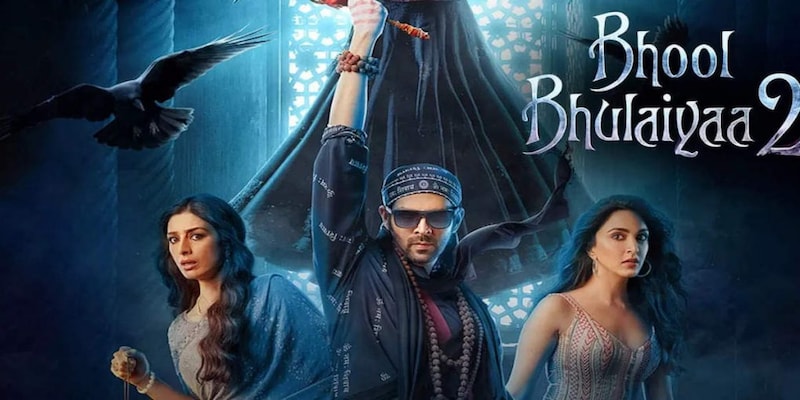 Directed by Anees Bazmee, 'Bhool Bhulaiyaa 2' is the spiritual sequel of the original 2007 film starring Akshay Kumar, Vidya Balan, and Shiney Ahuja. It is playing at a theatre near you.

Bhool Bhulaiyaa 2 retains a lot of the original Akshay Kumar-Vidya Balan film that released 15 years ago. The setting is still a haunted haveli in Rajasthan in which the ghost of a Bengali woman, Manjulika, is trapped on the third floor waiting for an opportune moment to carry out her vendetta. The lead characters set her free unwittingly, opening up a can of dark secrets and unfulfilled desires. It also has Rajpal Yadav’s iconic Chota Pandit and two of the most memorable songs from the original Priyadarshan film. But that’s about it.

At its worst, this Anees Bazmee film feels like an adulterated, dumbed-down rehash of the original that doesn’t care too much about the hows, the whys, or any other specifics. It has neither the poignance nor the charm of Bhool Bhulaiyaa. The horrid music and the forced love story between Kartik Aaryan’s Ruhaan and Kiara Advani’s Reet only make it worse. But Bhool Bhulaiyaa 2 gets better as it progresses.
Thankfully, it is keenly aware of where its strength lies and gives it ample opportunity and time to flourish. Tabu, Bollywood’s go-to choice for complex, grey female characters, is the best thing about Bhool Bhulaiyaa 2. Although you miss Kumar and Balan’s easy chemistry and effervescence from the original, Tabu holds the fort effortlessly in this one, carrying the film on her solid, dependable shoulders, adding to it the much-needed nuance, depth, and character, and preventing it from being the absolute trash that it would have been in her absence.
Although they might be a tad bit too large for him, Aaryan fits into Akshay Kumar’s shoes comfortably. Enough to moonwalk and waltz in them. The film gives his backstory as much time as it takes to read someone’s bio on Facebook. We know nothing more about his Ruhaan except that he has a lot of free time in life, enough to make the troubles of a girl he has just met his own.
'Bhool Bhulaiyaa 2' relies heavily on Aaryan’s newly-minted star power and uncontainable energy for spirit, swag, and humour. Some of it works. Most doesn’t. The humour bit is especially problematic and in poor taste in several pockets. Through Ruhaan, Bhool Bhulaiyaa 2 repeatedly makes fun of an overweight boy and a local priest with hearing impairment. I sincerely hoped Amar Kaushik’s Stree would usher in an era of intelligent, sensitive, contextual horror comedies in Hindi cinema. Unfortunately, the 2018 film fronted by Rajkummar Rao has turned out to be more of an exception than the norm.
Kiara Advani is painfully expendable in this film. She’s there because our heroes need a pretty heroine to dance with on songs as unnecessary and forgettable. Also, because our producers need a beautiful woman to titillate love. A little bit of on-screen romance, no matter how contrived, never killed anyone, right? And finally, for the posters and the promotions. Imagine how dull they’d have been without her.
But it was a real joy to see Rajpal Yadav reprising the role of Chota Pandit, the village fool, from the original. His style of comedy is so physical and so natural, that he makes everyone else’s look laboured. It’s nothing short of tragic how our film industry undervalues talents like his. Bhool Bhulaiyaa 2 also has Sanjay Mishra, as the partially deaf local priest. Although he’s great as always, I still don’t understand why an actor of his calibre and stature would agree to do this part.
At its best, 'Bhool Bhulaiyaa 2' demystifies and humanises evilness. It cares to build context. It shows how villainy takes root, grows over the years, can be extremely fluid and deceptive, and does not find fulfilment even if it does get its heart’s desire. It’s also a compelling case study of sibling rivalry and how ugly it can get if left unchecked.
Read other pieces by Sneha Bengani here.
Check out our in-depth Market Coverage, Business News & get real-time Stock Market Updates on CNBC-TV18. Also, Watch our channels CNBC-TV18, CNBC Awaaz and CNBC Bajar Live on-the-go!