Saudi Aramco, the world’s most profitable company, has announced its plan to launch an initial public offering and will be issuing a prospectus on November 9. Shares of the Saudi Arabian oil giant are expected to list on the Riyadh Stock Exchange in December. The company also intends to list shares internationally and will be deciding on the same going forward.

Saudi Arabia's state-owned company was expected to be valued at around $2 trillion, but, according to a Reuters report, some bankers have told the government that investors will likely value Saudi Aramco at around $1.5 trillion.
A steady performer, Aramco reported revenues of $356 billion (around Rs 25 lakh crore) in 2018, which is 6X the revenue generated by Reliance Industries and 25X revenue generated by oil major ONGC. Free cash flows have been increasing at a fast speed. In 2018, the company reported $86 billion of free cash flows, compared with just $2 billion in 2016.
In the first half of the calendar year 2019, Aramco's performance appears to have tapered a bit, considering the slowdown in the global economy. The second half could also be impacted by attacks on its refinery in September, which halved the crude output of the world's top oil exporter. The debt levels of the company have been comfortable. In fact, in 2018, Aramco was net cash. it had total debt of $27 billion and cash of $218 billion in 2018 and the gearing ratio was -8.6 percent. The return on average capital employed stood at 41.1 percent.
In terms of internals, the company is the biggest producer of oil, catering to around 10 percent of the world’s oil demand. It produces 10.3 million barrels per day of Crude and has reserves of 226.8 billion barrels. Natural gas production stood at 8.9bcf per day in 2018.

It also has downstream assets with a refining capacity of 3.1 mbpd and a pipeline network as long as 21,000 km. Certain of the company’s downstream products sold in the Kingdom are sold at regulated prices mandated by the government.
The regulated prices often have been lower than the prices at which the company could otherwise have sold such refined products, the company said in its bond prospectus.
On January 1, 2017, the government implemented an equalisation mechanism to compensate the company for revenue directly foregone as a result of compliance with the mandates related to crude oil, kerosene, diesel, heavy fuel oil and gasoline, with equalisation compensation recorded as other income related to sales. Notwithstanding this equalisation compensation, the company expects that its upstream business will continue to constitute a substantial majority of its net income.
Despite high production levels, the company’s ability to generate funds per barrel of oil produced has been lower than peers. It is in the middle of the pack which is led by Shell which produces $38 per barrel of oil produced, $31 for Total and Saudi stands at $26. This is also because of the higher taxes. 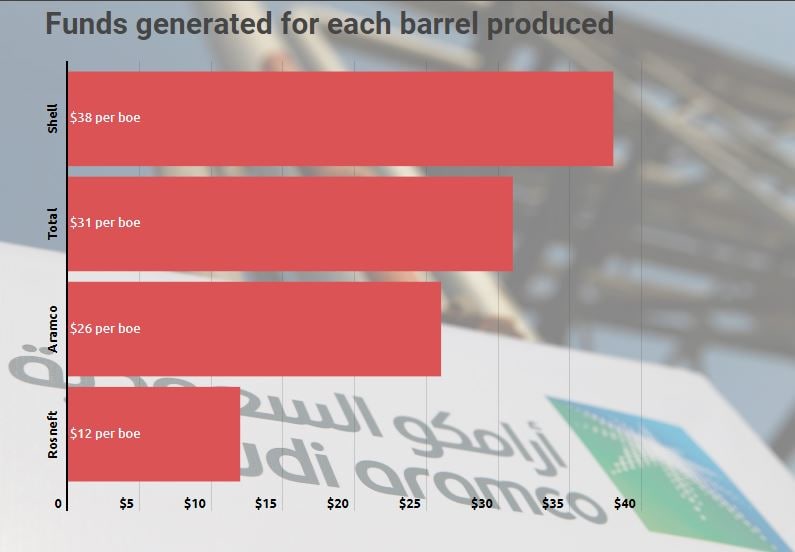 Saudi Aramco's capability to generate profits knows no boundary. It was the most profitable company in 2018, with profits of $111 billion—equal to profits reported by US giants Apple, Google and Exxon Mobil combined.